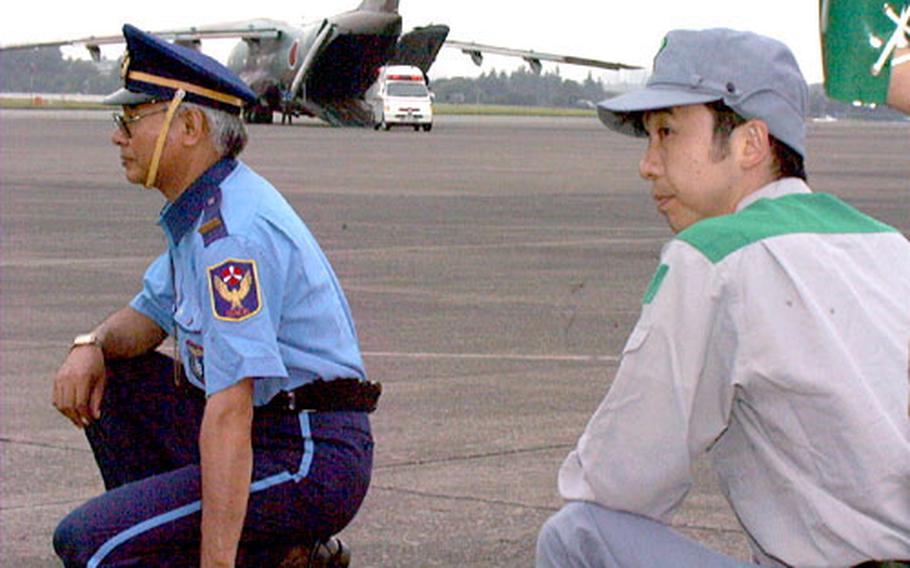 Tokyo government officials watch the runway while an ambulance unloads from the back of a Japanese C-1 aircraft. (Jennifer H. Svan / S&S)

Tokyo government officials watch the runway while an ambulance unloads from the back of a Japanese C-1 aircraft. (Jennifer H. Svan / S&S) 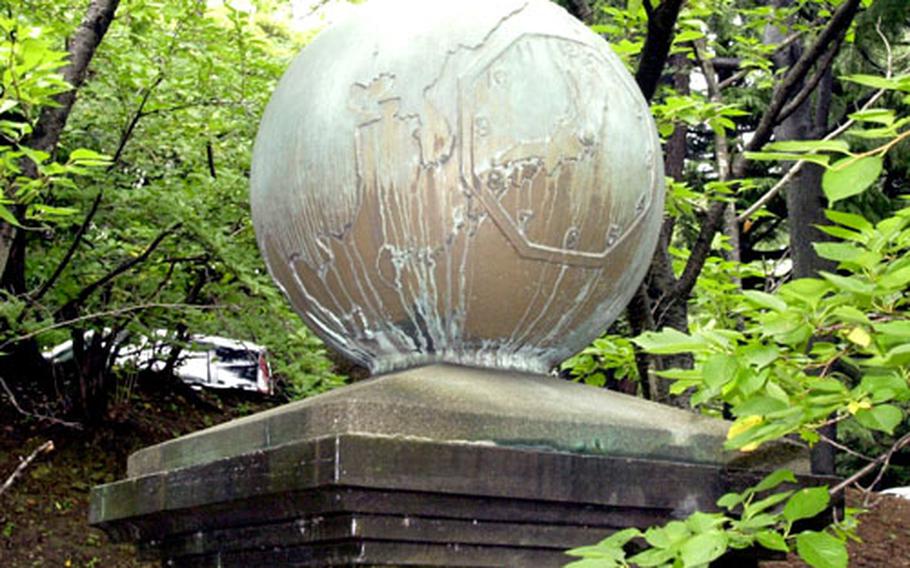 A monument at Yokosuka Naval Base commemorates the Great Kanto Plain earthquake of 1923. (Jim Schulz / S&S) 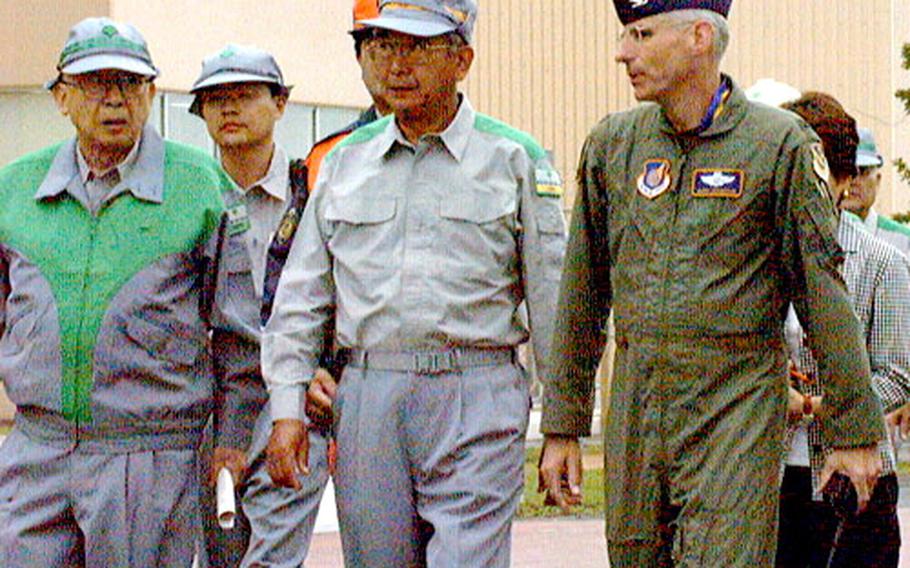 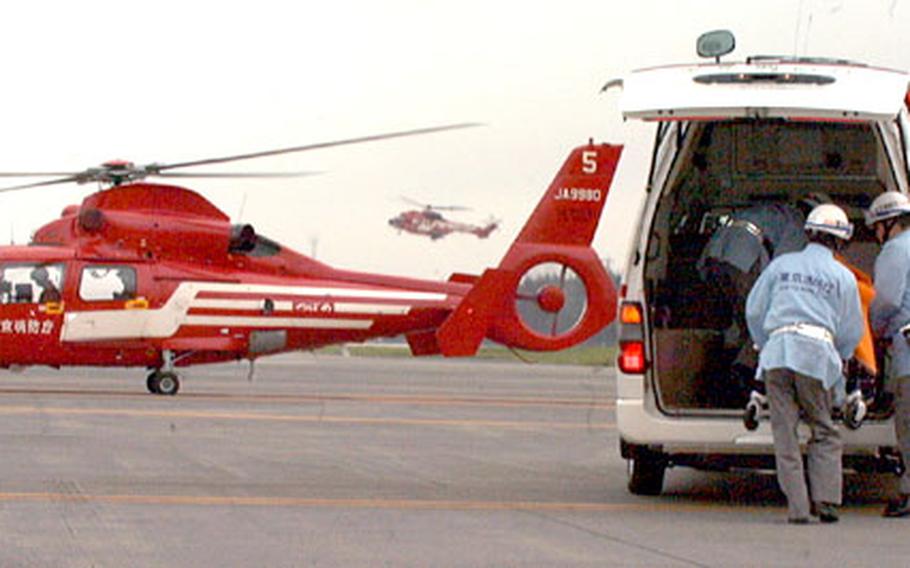 The Tokyo Metropolitan Government staged its third annual earthquake drill Monday morning on the south end of the runway, and a handful of military officials at Yokota were invited to watch.

Takase is an advisor to Tokyo Gov. Shintaro Ishihara, who landed in a helicopter Monday at Yokota and sat with Schissler for about 40 minutes observing Japanese emergency and local municipal workers practice the earthquake drill.

More than a million Japanese participated in disaster prevention exercises throughout the country Monday, the 80th anniversary of the Great Kanto Earthquake, which killed about 140,000 people in 1923.

Tokyo&#8217;s government wagers Yokota would weather a major Tokyo earthquake better than the city&#8217;s domestic Haneda Airport, which is built adjacent to the ocean, Takase said. He also noted Yokota is closer to Tokyo&#8217;s 23 wards than Japan&#8217;s international Narita airport, and runways at the region&#8217;s Japanese air bases are too small to support large aircraft.

Monday&#8217;s exercise scenario called for a large earthquake to strike around 7:30 a.m. in the Tama area, causing extensive building damage, death and injury. In response, a Japanese C-1 aircraft delivered police officers and an ambulance from Hokkaido to Yokota. A C-130 later airlifted to the base two compact fire trucks, which would be used to douse fires. Plastic dummies on gurneys &#8212; representing the injured from Yokota&#8217;s neighboring cities and town &#8212; arrived on government helicopters and were ferried into the belly of a waiting C-1.

Yokota officials estimated that about half a million residents live in the five cities and one town that border Yokota. The Tokyo Metropolitan Government represents Tokyo, Kanagawa, Chiba and Saitama prefectures.

Ishihara, long an outspoken proponent of converting Yokota into a dual military and civilian runway, wasn&#8217;t expected to discuss that issue with Schissler, Takase said. President Bush in May agreed to allow government officials from both countries to study letting civilian aircraft use the airstrip, though that process has not yet begun, Takase said. But he said he&#8217;s optimistic that joint use will happen: &#8220;I think so, since your bosses agreed,&#8221; he said.

The deadliest earthquake in Japan&#8217;s recorded history struck at 11:58 on the morning of Sept. 1, 1923, just as the citizens of Tokyo and Yokohama were preparing to eat lunch. Official records vary on how long the quake&#8217;s vibrations were felt, but accounts range from four minutes to two and a half hours. Centered under Sagami Bay, south of Shizuoka Prefecture, it measured 8.3 on the Richter scale. More than 800 aftershocks were recorded in the hours and days that followed.

&#8220;The ground could scarcely be said to shake; it heaved, tossed and leapt,&#8221; a Yokohama office manager said, as told by Carol Cameron and Charles James in a National Information Service for Earthquake Engineering report for the University of California at Berkeley. &#8220;The walls bulged as if made of cardboard and the din became awful. &#8230; Slabs of plaster left the ceilings and fell about our ears, filling the air with a blinding, smothering fog of dust. How long it lasted, I don&#8217;t know. It seemed an eternity.&#8221;

About 140,000 people in Tokyo and Yokohama died, both in the quake itself and massive fires that sprang up as a result. When the quake struck, coal or charcoal cooking stoves were lit for the noon-time meal, and improper storage of chemicals and fuel further added to the conflagration.

The quake also caused a tsunami &#8212; a wave up to 39.5 feet high that struck the north shore of Oshima Island but did little damage &#8212; and various landslides that killed hundreds.

More than 694,000 houses were partially or completely destroyed, according to Cameron and James. Much of the blame was attributed to tile roofs, which were popular at the time in Japanese construction; their displacement exposed wooden roofs to fire.