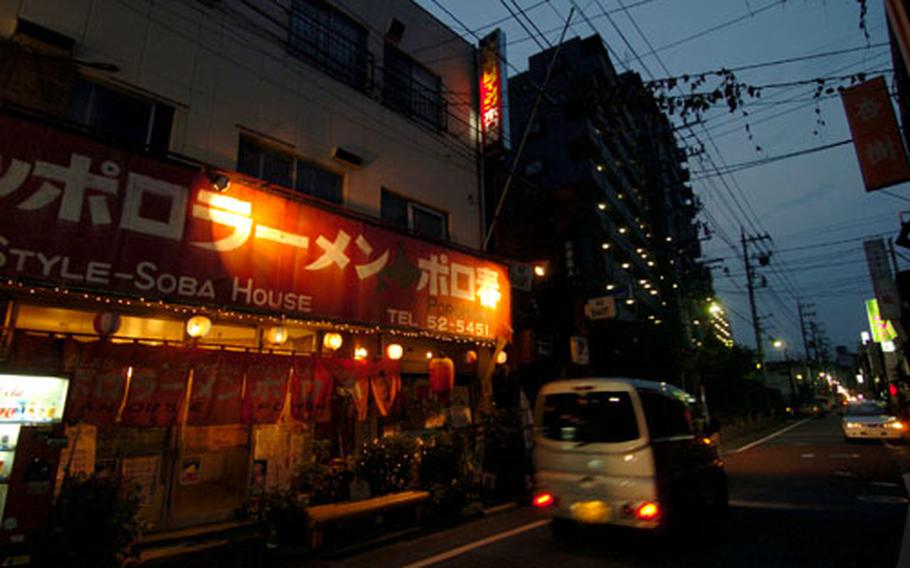 Businesses like this ramen noodle shop near Yokota Air Base are feeling the effects of Yokota’s 1 a.m. to 6 a.m. curfew on the area within a block of Akasen-dori, othewise know as Bar Row. (Christopher B. Stoltz / S&S)

Businesses like this ramen noodle shop near Yokota Air Base are feeling the effects of Yokota’s 1 a.m. to 6 a.m. curfew on the area within a block of Akasen-dori, othewise know as Bar Row. (Christopher B. Stoltz / S&S) 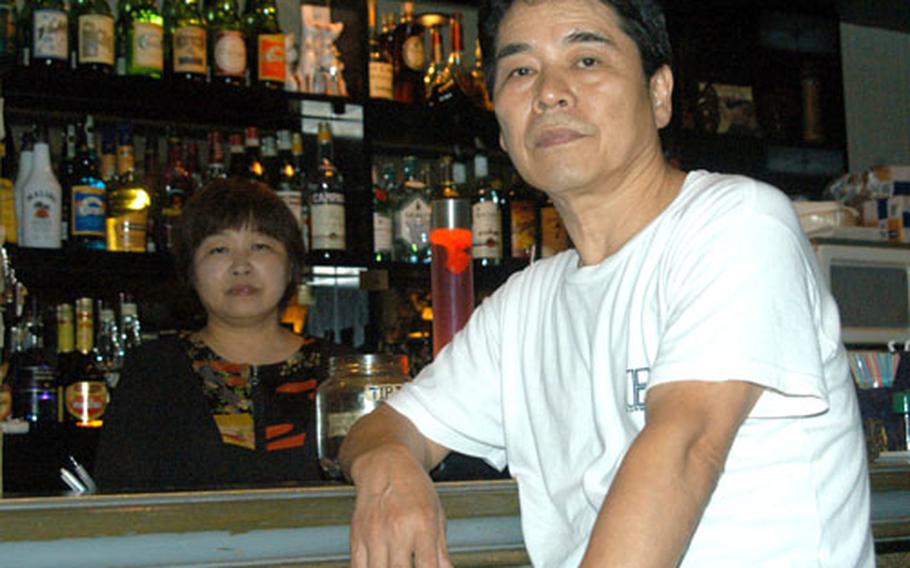 Katsutoshi Yasumoto, right, and his wife, Yumi, have owned and operated Yumi’s Bar, which sits a block east of Bar Row on a narrow backstreet, since 1967. He estimates 80 percent of his business has disappeared since Yokota’s curfew began two months ago. (Vince Little / S&S)

But while base officials tout the curfew&#8217;s effectiveness, some Yokota airmen say it&#8217;s too harsh on the great majority of personnel who don&#8217;t engage in misconduct when they head outside the gates. The measure also reportedly has had a significant financial impact on at least one establishment owner.

Col. Mark Schissler, the former Yokota commander, issued the indefinite order after a string of incidents linked to the base&#8217;s airmen. It prohibits all Yokota servicemembers from being within a block of Akasen-dori &#8212; which lies near Honcho-dori and Fujimi-dori between the base and Fussa Train Station &#8212; for five hours each morning.

Goodwin, the 374th Airlift Wing commander, said Friday the policy has produced the desired results. There hasn&#8217;t been an incident or injury involving a Yokota community member in the Fussa City entertainment district since it took effect May 9, he said.

&#8220;But more importantly, the local city and government officials from Fussa City have received nothing but great feedback from the Japanese residents who live near Bar Row and they&#8217;ve shared their satisfaction with us,&#8221; Goodwin said. &#8220;It&#8217;s a win-win situation for both the base and local community.&#8221;

Not everybody sees it that way, however.

Katsutoshi Yasumoto, 61, has operated Yumi&#8217;s Bar since 1967. It sits a block east of Bar Row on a narrow back street. For 38 years, he and wife Yumi have poured alcoholic beverages and cooked up various late-night favorites for the many U.S. troops who frequent the tiny pub.

He&#8217;s open from 8 p.m. to 5 a.m. and says he can&#8217;t recall ever having a major problem inside his establishment. But since the curfew about 80 percent of his business has disappeared, he said.

American customers now drop by his bar for an hour, he said, then head out at 12:30 a.m. to find another place outside the restricted zone.

Yasumoto, who serves as vice president of the Bar Row Owner&#8217;s Association, said two nearby bars have closed since the curfew, unable to pay the rent.

Yasumoto said more Fussa police patrols would prevent many problems along the strip simply by establishing a presence near the most raucous clubs. City officials claimed police are too busy to monitor Bar Row, he said.

&#8216;A couple of bad apples&#8217;Airman 1st Class Jay Patterson and Airman 1st Class Viet Ha, both of the 374th Medical Group, say the restriction has led many servicemembers to alter weekend plans in favor of other metro destinations farther away from Yokota. Those include Roppongi, Shibuya, Shinjuku and Hachioji &#8212; where servicemembers often stay out later than before because Tokyo trains stop running shortly after midnight.

Patterson believes the prospects for more serious incidents are higher because of the curfew.

Not going awayAn airman assigned to the 374th Logistics Readiness Squadron, who asked not to be identified, said the restriction isn&#8217;t a bad idea, particularly for young servicemembers fresh out of high school and thrust into a nightlife scene in which alcohol is so readily available. The limited access to Bar Row also has sliced his own bar tabs in half, he mused.

Base officials have declined to say whether special patrols have been dispatched to enforce the restriction.

&#8220;The men and women of Yokota Air Base are fully aware of the policy and their full compliance is expected,&#8221; Goodwin said. &#8220;Our commanders and senior NCOs are doing all the right things to ensure our airmen are adhering to this policy.&#8221;

&#8220;Based on the feedback we&#8217;re receiving from the Fussa City and local government officials, and the fact that our airmen are staying out of the area during the restricted hours, I see no reason to ease or lift the restriction,&#8221; Goodwin said. &#8220;The policy is helping to ensure the health and safety of the Yokota community, but as an added bonus, we&#8217;re strengthening our local community relations with Fussa City.&#8221;