Air Force Capt. Mervin Howe from the 374th Medical Group at Yokota Air Base, Japan, treats a patient Sunday in a field hospital set up to help support civilians on Guam in the aftermath of a super typhoon. (Jason Carter / S&S)

Air Force Capt. Mervin Howe from the 374th Medical Group at Yokota Air Base, Japan, treats a patient Sunday in a field hospital set up to help support civilians on Guam in the aftermath of a super typhoon. (Jason Carter / S&S) 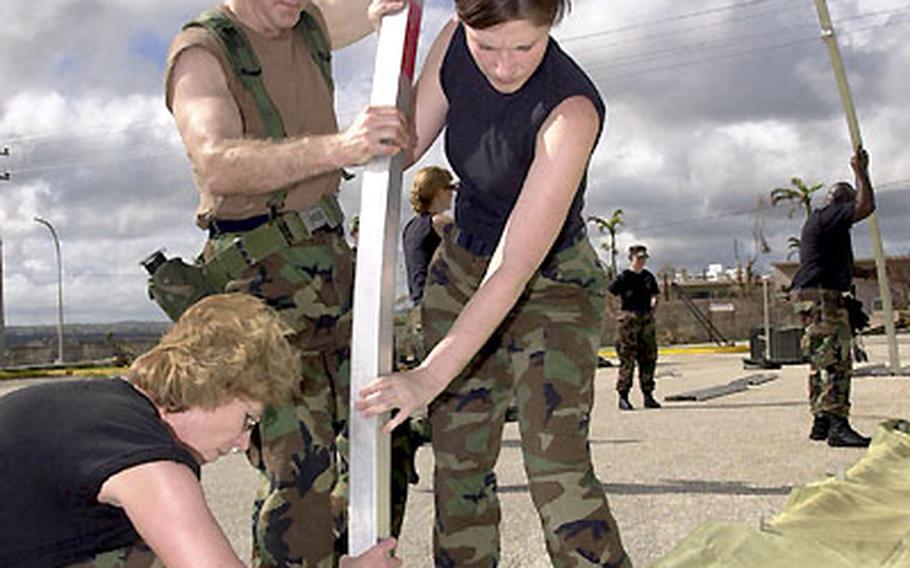 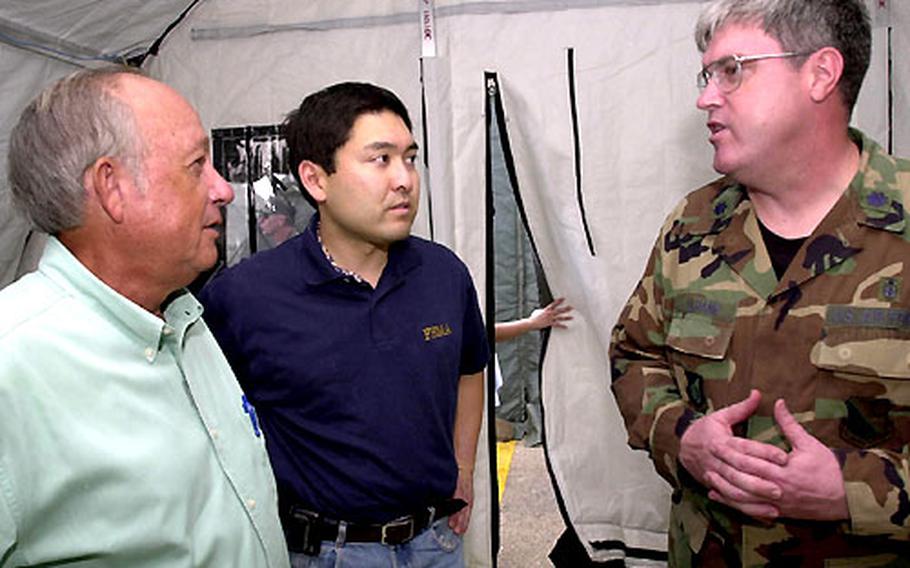 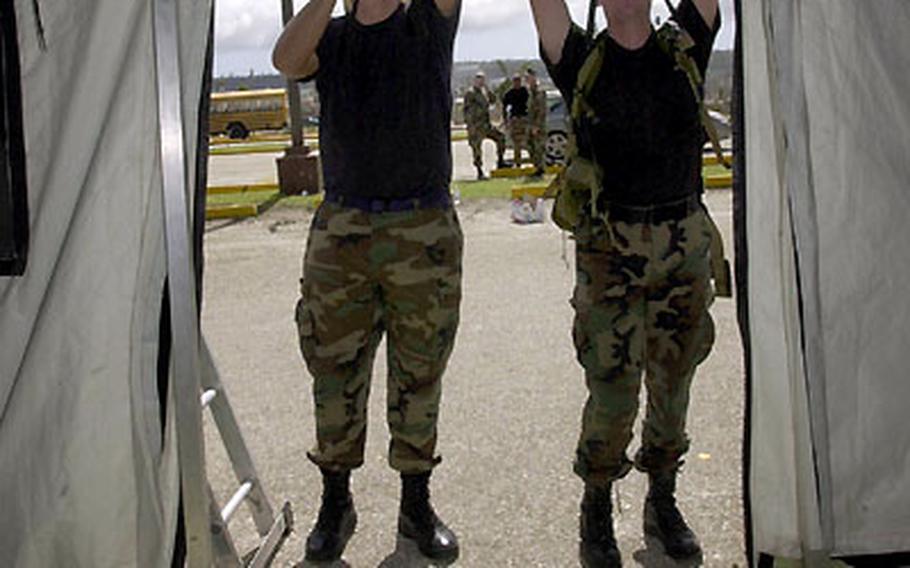 GUAM &#8212; Tech Sgt. Lisa Carter advised the airmen from Yokota Air Base, Japan, against walking around the island at night.

In her briefing on safety to the newly arrived troops inside Andersen Air Force Base&#8217;s terminal late Friday, she said a C-5 recently whizzed by the window like a ghost in the dark. The only telltale sign of the hulking aircraft was its engine noise.

That&#8217;s usually not difficult on tropical Guam, but for the 26 men and women from Yokota&#8217;s 374th Medical Group, this TDY would be about survival, not comfort.

Guam still is reeling from the effects of Pongsona, a super typhoon that devastated the island with 180 mph winds on Dec. 8. Electricity is still out, gasoline is being rationed and many residences don&#8217;t have running water.

Pongsona snapped concrete utility poles in two, leaving electrical wires snaking across roads. Giant trees are uprooted. Automobiles that were flipped and hurled during the storm lie upside down in bushes. And pieces of crumpled sheet-metal roofing outnumber fallen coconuts.

The scene resembles a war zone.

The physicians, dentists, medical technicians, surgeons and other medical experts in an EMEDS team are trained to deploy on a moment&#8217;s notice, set up a portable hospital anywhere in the world and provide emergency care within hours, said Col. Peggy Matarese, 374th Medical Group commander.

The team departed for Guam on Friday in response to a request from the Federal Emergency Management Agency, which acted after Guam Gov. Carl Gutierrez sought assistance for the island&#8217;s only civilian hospital just a day after the typhoon, FEMA officials said.

More than 400 federal relief workers are on the island, from FEMA and the Department of Defense to the U.S. Forest Service, according to David Fukutomi, FEMA&#8217;s federal coordinating officer.

Other agencies are on standby to send people when the island&#8217;s current shortage of fuel and adequate housing improves, Fukutomi said.

Gutierrez, who visited the EMEDS site Sunday morning, said he was pleased to see such a quick response from the Air Force and other federal agencies to mobilize the field hospital in less than week.

The cooperation among local and federal agencies to help with relief efforts is unprecedented, he said.

For many, holiday plans were put on hold.

After a five-hour flight aboard a C-130 to Guam on Friday afternoon, the team spent Friday night in Andersen&#8217;s barracks without electricity or hot showers. Many of the rooms had leaky ceilings and wet carpets that smelled like mildew.

Though the mission to Guam is humanitarian, team members said the lack of amenities made it good practice for operating in a wartime environment.

Besides building a field hospital, they had to bring in potable water and provide generators for electricity.

One tent set up with four beds was designed to hold the overflow of in-patients from GMH. When Gutierrez visited Sunday morning, one patient was in the makeshift ward, a local male in his 20s with multiple injuries from a fall.

Lt. Col. Mike Culhane, commander of the EMEDS team, said he expected the beds to fill, but it was up to GMH&#8217;s medical personnel to decide which patients to keep in the field hospital.

In the meantime, an EMEDS package to expand the mobile unit to 25 beds was on the way to Guam from Yokota, Culhane said. Whether it will be set up depends on GMH&#8217;s need, he said.

Pongsona battered the hospital; some walls collapsed, forcing closure of the pediatrics ward and the intensive care, respiratory and medical telemetry units.

Medical personnel who worked during the storm told stories Saturday that seemed more fitting for a bomb shelter during war.

As windows blew out and walls buckled, patients were ferried into the heart of GMH, Solidan said.

Dr. James Last, who works in the emergency room, said he tried to help a nurse&#8217;s mother, who suffered a heart attack during the typhoon. The woman lived about 200 yards from the hospital but when Last poked his head outside, the hood of one of the ambulances flew off &#8220;and so I couldn&#8217;t get out.&#8221; The woman died.

Many at the hospital said Pongsona was the worst typhoon they&#8217;ve experienced. The storm was slow to move away, allowing its ferocious winds, which gusted up to 180 mph, to pummel the island for more than 12 hours.

A week later, and still with no running water, Yokota&#8217;s EMEDS team is concerned about dehydration and waterborne illnesses, said Maj. Claude Jennings, a labor and delivery nurse with the group.

Much of the island still is on notice to boil water but with power down, many homes lack air conditioning.

After sweating most of the day Saturday to erect the tents, the EMEDS team was eager to see patients. An operating table looked polished and ready to go, while the finishing touches were being put to the emergency room tent stocked with prescription drugs, sutures and other equipment.

&#8220;In a regular hospital, you have half a dozen instruments. Here, I use just one, the most useful one,&#8221; said Maj. Randy Wobser, 41, an obstetrician and gynecologist.