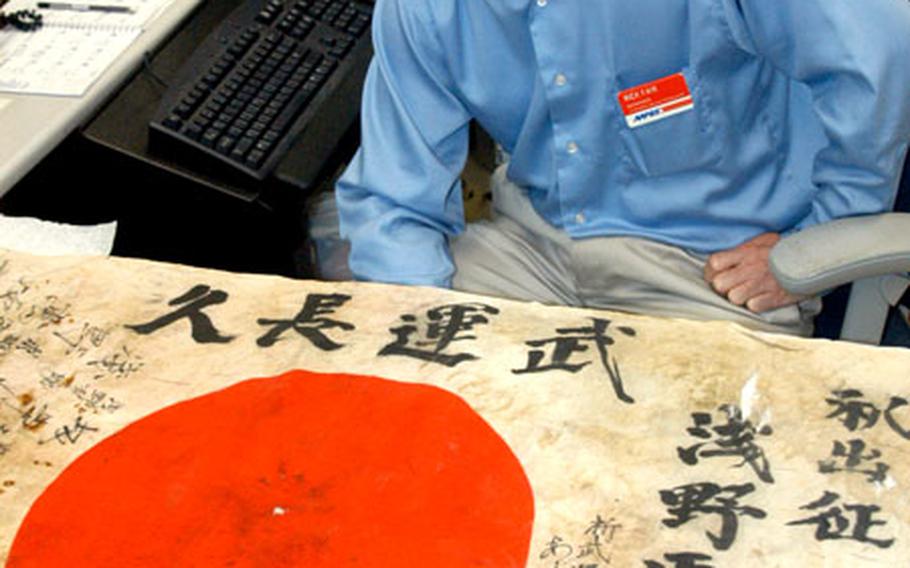 YOKOTA AIR BASE, Japan &#8212; Growing up, Rick Fair had seen the Japanese flag his Army father brought home from World War II but didn&#8217;t know much about it.

During a 31-year career, Col. Leland B. Fair of Chillicothe, Mo., was highly decorated. His many awards included the Distinguished Service Cross, Silver Star, Legion of Merit and Purple Heart. But like many veterans, he didn&#8217;t talk a whole lot about the things he&#8217;d seen in battle.

Fair died in March 2002 at age 79 and is buried in Arlington National Cemetery. When he saw his son a final time the previous year, he made one wish clear.

Fair, operations manager for the Army and Air Force Exchange Service&#8217;s Yokota Community Center, suspects his father brought the flag back from Mindanao, Philippines. Japanese soldiers often wore the flags underneath their uniforms and around the waist, believing they provided a form of spiritual protection.

The silk cloth, a white banner emblazoned with the large, red circle symbolizing Japan as the land of the rising run, is inscribed in kanji and dated May 8, 1944. It carries dirt stains but otherwise is well-preserved. Under the words &#8220;Kill Enemy Quickly,&#8221; about 60 people left names and messages congratulating Shotaro Asano for joining the Japanese Imperial Army.

Fair said he recently consulted a nonprofit organization dedicated to returning World War II-era mementos to Japanese families. The group arranged a June 17 news conference in nearby Tachikawa, where Fair displayed the flag in hopes of developing leads &#8212; but he says he&#8217;s received few so far.

Mieko Morita, a 374th Airlift Wing spokeswoman, said &#8220;Asano&#8221; is a very common name in Japan. Base officials are exploring how they might be able to help search, she added.

In August, the flag of a Japanese soldier killed in the Battle of Okinawa on June 17, 1945, was returned to the soldier&#8217;s brother during an emotional ceremony at Yokota.

Fair said he&#8217;d love to take part in such a ceremony, for his father and to honor the memory of Shotaro Asano.