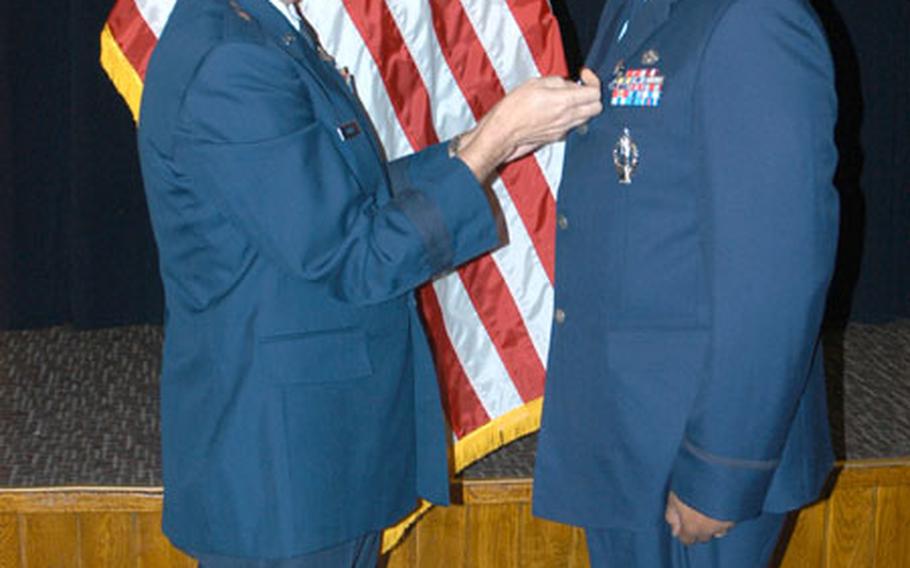 YOKOTA AIR BASE, Japan &#8212; When the first alarm went off signaling the possibility of a missile attack, Maj. David Andino-Aquino knew he wasn&#8217;t in Japan anymore.

&#8220;We train and train and train,&#8221; said Andino-Aquino, who spent six months last year as commander of the 386th Expeditionary Services Squadron at Ali Al Salem Air Base, Kuwait. &#8220;You have these exercises before you go, but you know that no missile is going to be flying your way. When the first alarm went off there, it really shook me up. It shook up everybody in the unit.&#8221;

The missile didn&#8217;t come, but the incident served as a reminder of the seriousness of his mission to enhance the quality of life for more than 4,000 troops by providing food, lodging, fitness, recreation and mortuary affairs.

For his efforts, Andino-Aquino was awarded the Bronze Star on Friday for meritorious achievement during Operation Iraqi Freedom.

Brig. Gen. Rusty Finley, vice commander of the 5th Air Force, presented the medal in an emotional ceremony at the Yokota Officers Club.

&#8220;He did some extraordinary things under very difficult circumstances,&#8221; said Finley. &#8220;This is what it&#8217;s all about when you go into a war zone. This man and his team made it a dignified and rightful tribute for those folks over there. That included being in harm&#8217;s way himself.

During the war, Andino-Aquino, who deployed from the 374th Services Division, managed a 113-person staff from 12 bases.

He was in the Middle East from January to June.

Finley said Andino-Aquino was directly involved in creating a comprehensive quality-of-life plan that addressed each aspect of the wing&#8217;s conflict requirements.

Andino-Aquino&#8217;s wife and daughter were seated in the front row for Friday&#8217;s ceremony. He said the time away from them was perhaps the toughest part.

The Bronze Star Medal is awarded to U.S. armed forces members serving in a combat situation who have distinguished themselves by heroism, outstanding achievement or meritorious service. It was established in 1944 by Executive Order of President Franklin D. Roosevelt.