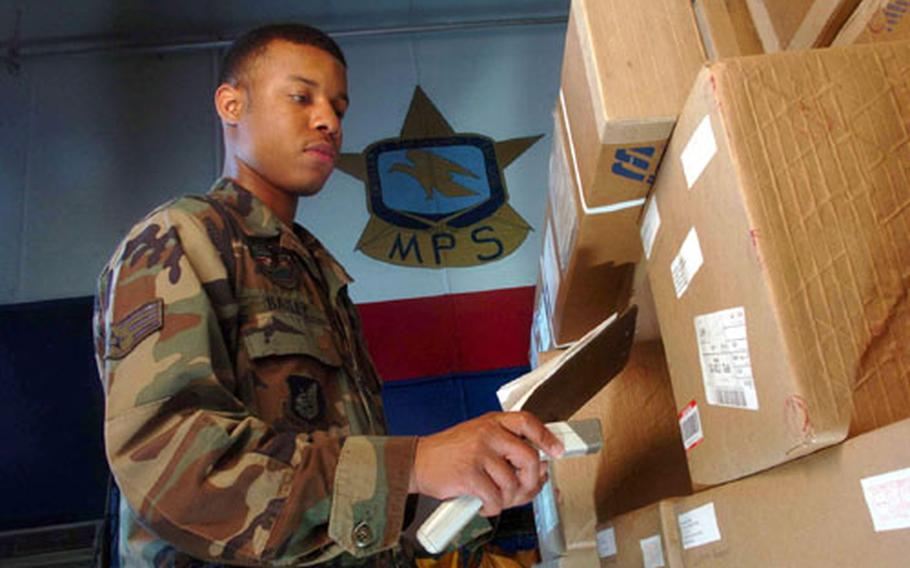 Airman 1st Class Jonathon Elzie from Detachment 2, Air Postal Squadron at Yokota Air Base, Japan, along with Japanese employees inspects packages at the mail processing facility here for the proper markings before shipment. (Courtesy of USAF) 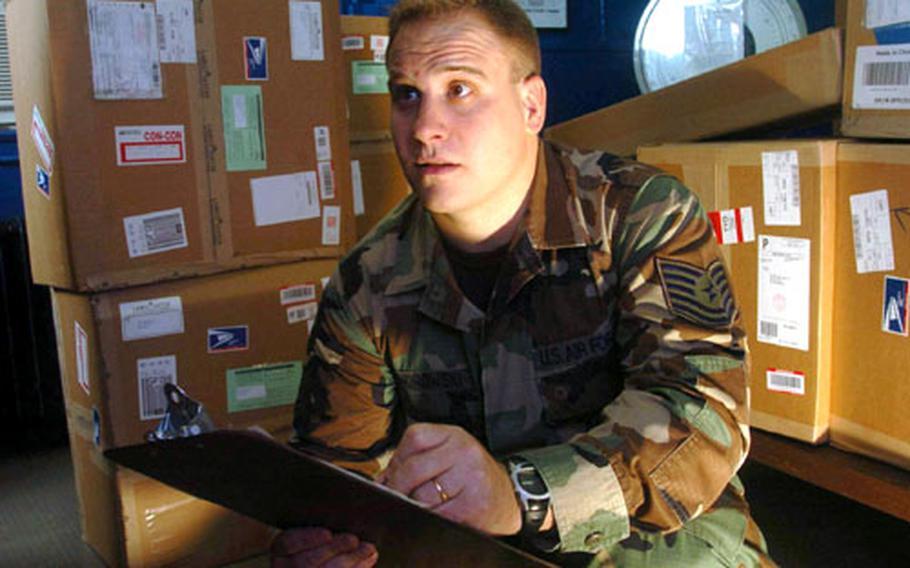 Airman 1st Class Jonathon Elzie from Detachment 2, Air Postal Squadron at Yokota Air Base, Japan, inspects a package Tuesday at the mail processing facility to ensure that it has proper markings before shipment. (Courtesy of USAF)

In a year&#8217;s time, the stacks of packages and letters total 50 million pounds of military mail for Defense Department personnel and their families living in Japan.

Ravenel said this is the second year the Air Force has recognized its aerial mail terminals &#8212; mail processing centers that serve military post offices around the world. There are about 12 across the service, Ravenel said.

The detachment runs the Pacific&#8217;s largest aerial mail terminal. All mail destined for military post offices in the region &#8220;comes into Tokyo or passes through Tokyo,&#8221; Ravenel said.

Most of the unit&#8217;s military members and Japanese nationals work from Yokota or Narita airport east of Tokyo. They also run a four-person post office in Bangkok, Thailand, that recently was named the &#8220;Best Small Post Office&#8221; in the Air Force.

The remote location serves military members and other DOD personnel living, working or on temporary duty in Thailand.

If an airline carrier has a problem that affects military mail, the detachment works to solve it, Ravenel said.

The group&#8217;s main job, however, is mail transportation and processing: Every day, two trucks make runs back and forth between Yokota and Narita; another makes a daily trek to Haneda airport and a fourth to Tokyo&#8217;s international post office.

At Narita, they drop off outgoing mail and pick up incoming mail for Japan&#8217;s Yokota Air Base, Misawa Air Base and Camp Zama, and registered mail for all services on Okinawa.

Incoming mail is sorted at Yokota for each base&#8217;s post office. Mail to Misawa is transported via Haneda airport near Tokyo.

The biggest challenge, Ravenel said, continues to be the lengthy drive to Narita &#8212; a 75-mile route, winding through the heart of congested Tokyo, that can take up to four hours one direction.

Heavy-equipment operators from Yokota&#8217;s 374th Logistic Readiness Squadron are at the wheel of the 32-foot mail trucks.

Ravenel said one factor that may have earned the detachment tops in the Air Force was getting the job done with a skeleton crew.

&#8220;Over the past 12 months, every one of our military folks deployed in support of Operation Iraqi Freedom,&#8221; he said. &#8220;When you have a staff of about 30 military members and seven of them are gone, that&#8217;s a big percentage you give up. We still managed to keep the mail running smoothly in the Pacific.&#8221;

The deployed airmen, meanwhile, faced other challenges. They helped set mail operations at Baghdad International Airport and deliver more than 16 million pounds of mail &#8212; some through hostile fire &#8212; to 130,000 troops in Iraq, according to Pacific Air Forces News Service.

&#8220;It&#8217;s been a Herculean effort for us to meet and surpass our goals with so many troops gone,&#8221; unit superintendent Senior Master Sgt. Michael Breazell said in a PACAF News Service news release, &#8220;but we have a good cohesive crew. They just did their work with a flair and a smile.&#8221;