Yokota Idol winner Tuazon was feeling the ‘Rhythm of the Night’ 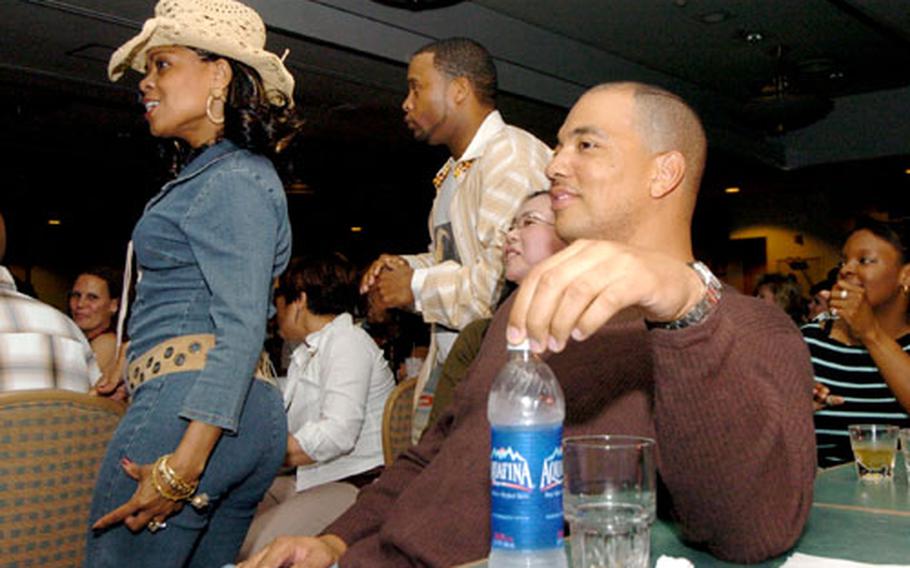 Servicemembers dance and watch during a cover of “Rock with You” by Michael Jackson performed by a servicemember at Yokota Air Base, Japan, on Saturday. (Christopher B. Stoltz / S&S)

YOKOTA AIR BASE, Japan &#8212; Some of Yokota&#8217;s most talented singers &#8212; and some not-so-talented &#8212; came out to the Enlisted Club Ballroom on Saturday evening to try out their talent in the 5th Annual Yokota Idol competition.

Eight competitors got the chance to perform in front of several hundred people including five judges. The competition was modeled after the television show &#8220;American Idol.&#8221;

The judges all are active-duty servicemembers and some are professional singers. As in the TV show, each gave his or her impressions after each performance.

The judges gave credit to each performer for their courage to get up on stage and perform in front of the crowd. However, sometimes that was where the compliments ended.

&#8220;I was actually hoping that the power would go out,&#8221; said one judge after a performance early in the competition.

But a few hours later, after performing a rousing cover of &#8220;Rhythm of the Night&#8221; by Debarge, Tuazon had the crowd on its feet and was crowned the 2006 Yokota Idol.

Tuazon said he&#8217;s been singing for about 15 years and entered this year&#8217;s competition to help get rid of his stage fright.

At the end of the show, an elated Tuazon said he still had a little stage fright, but seeing a crowd cheering for him certainly helped calm his nerves.

Judge Jamie Montgomery said this year&#8217;s competition &#8220;really ran smoothly. The judging was pretty fair and the competitors really turned it on at the end.&#8221;

During intermissions, the audience was treated to performances by a live band and by several of the judges including Montgomery and the 2005 Yokota Idol, Linda Sterling.

The second-place winner was Shawn Gomez and third place was Leo Palanco.