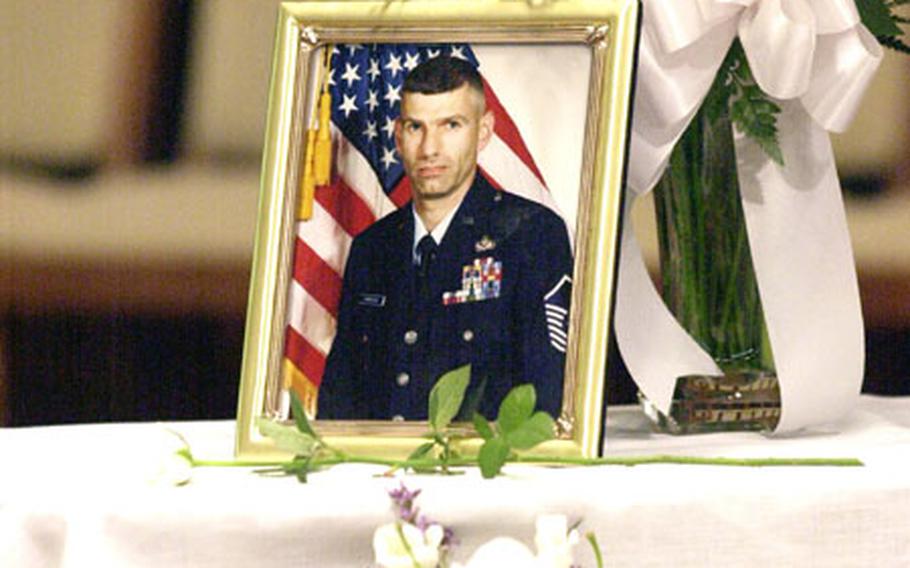 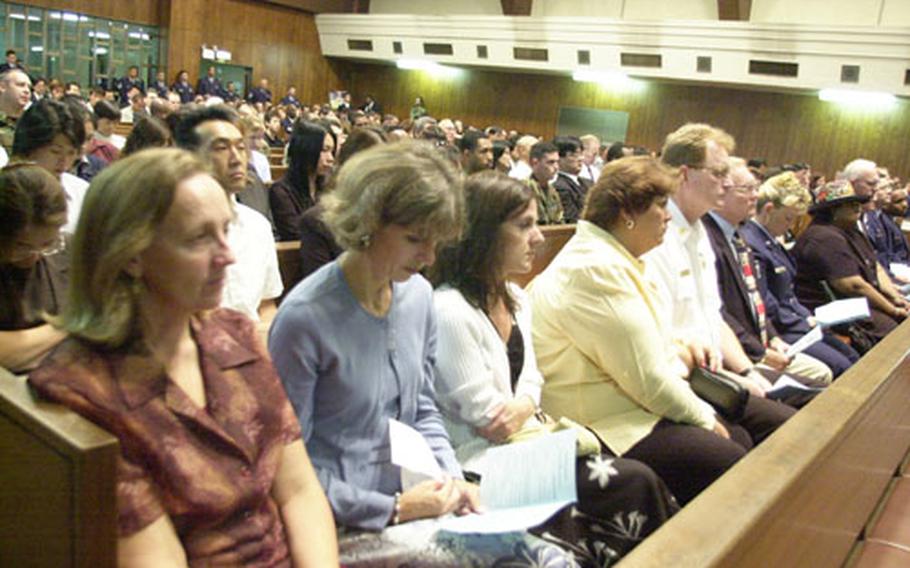 About 150 people filled the sanctuary at Yokota Air Base West Chapel, where a memorial service for Chief Master Sgt. Winfred B. Harrison was held Thursday. (Jim Schulz / S&S)

YOKOTA AIR BASE, Japan &#8212; Family, friends and former colleagues of Chief Master Sgt. Winfred B. Harrison filled Yokota&#8217;s West Chapel on Thursday, recalling him as a man dedicated to family and committed to the Air Force mission.

Some 150 people attended Harrison&#8217;s hourlong memorial service, its somber mood seeming to match the weather outside, where a dreary, cool rain fell steadily throughout the day.

&#8220;The loss of Chief Harrison is felt across the Air Force and around the world,&#8221; said Lt. Col. Martin Granum, 374th Civil Engineering Squadron commander. &#8220;At this time, members of our squadron deployed in Korea, Kuwait, Qatar and Iraq are also pausing to remember the chief. They are doing today what Chief Harrison did for 26 years &#8212; serving our country, and often in difficult conditions.&#8221;

Harrison, 44, was found dead Aug. 7 at a building in Yokota after he failed to appear for his general court-martial. He faced charges ranging from indecent acts to being absent without leave.

The cause of death remains undetermined, said Maj. Eric Hilliard, a 5th Air Force spokesman. Earlier this week, Harrison&#8217;s body was flown to Okinawa, where a forensic pathologist was to perform an autopsy.

While questions linger about the case, those who attended Thursday&#8217;s memorial opted to remember Harrison&#8217;s contributions to Yokota and his love of family. Over a 26-year career, he spent all but nine years at overseas locations.

Bittick pointed to Harrison&#8217;s role in securing and refortifying the base gates after the Sept. 11, 2001, terrorist attacks. She said he also was a key player in Yokota&#8217;s $66 million runway resurfacing project, which was completed last year.

&#8220;Wherever and whenever the Air Force needed him, the chief was ready to go,&#8221; added Granum. &#8220;And the chief knew civil engineering like no one else. Chief Harrison&#8217;s breadth of knowledge and ability to lead all aspects of our mission was simply remarkable.

As Taps played over the chapel&#8217;s loudspeaker, Granum presented Harrison&#8217;s widow, Okhui, an American flag. The couple&#8217;s two teenage children, Charlie and Susan, sat next to their mother; for part of the service, mother and son quietly clasped hands.

Many &#8220;remember the chief as an exceptional engineer, always ready to assist and make things happen,&#8221; Granum said. &#8220;The chief told me there were two things that got him out of bed in the morning: his family and the Air Force.&#8221;

Counseling options were presented to the chief, Hilliard said; they&#8217;re offered to everyone accused of crimes under the Uniform Code of Military Justice. &#8220;But I cannot say whether or not he actually received counseling,&#8221; he added.

Hilliard said Harrison&#8217;s family received &#8220;the standard military death benefit and all unpaid pay and allowances,&#8221; adding that he was uncertain of the package&#8217;s amount.