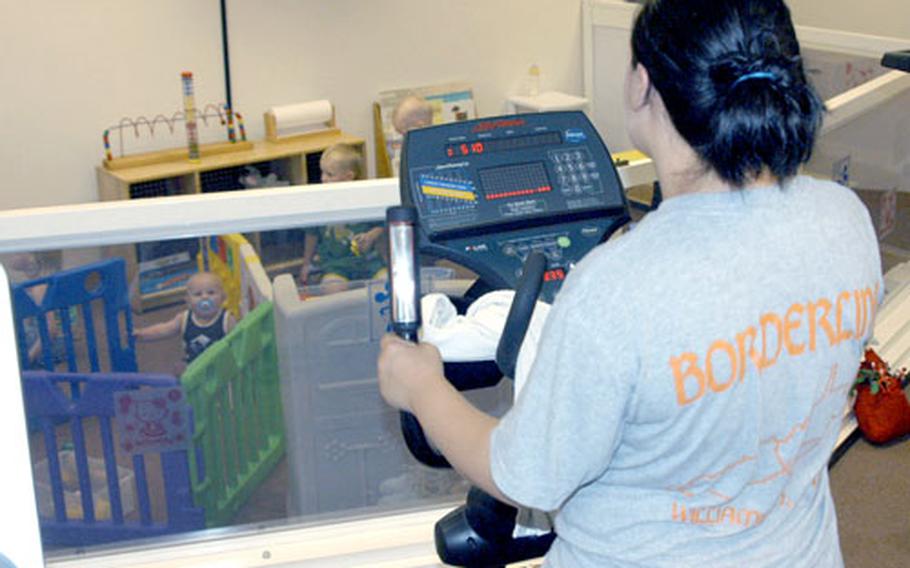 Julie Ooten, whose husband is deployed, watches her two children while working out on an elliptical machine Saturday at the Samurai Fitness Center on Yokota Air Base, Japan. (Vince Little / S&S)

Yokota&#8217;s Samurai Fitness Center on Friday unveiled a special parent-child workout area, with cardio equipment for Mom or Dad and a playroom for the kids that includes toys, coloring books and a TV, videocassette recorder and DVD player. A Plexiglas divider allows for constant supervision.

The parent-child workout area, which the staff had used as office space, has a treadmill, elliptical machine, stepper and stationary bike. There&#8217;s also a TV for the adults.

Julie Ooten, whose husband is deployed, brought her two small children to the gym Saturday afternoon and kept an eye on them while battling the elliptical machine.

Standing on a nearby stepper, Stephanie Faircloth said she&#8217;s been waiting to see a child-care option at the fitness center for a year, ever since her family arrived at Yokota.

Meanwhile, work has begun on a major two-story addition to the gym the Japanese government is building across the street. The facility, expected to cost almost $13 million, will house the base&#8217;s Health and Wellness Center, more free weights, cardio equipment, martial-arts rooms, aerobics, an extra basketball court and exercise floors.

Ground was broken recently across Foulois Street off Airlift Avenue. The old single-story lodging structure sitting between the Samurai Fitness Center and contracting squadron office will be taken down and replaced by a new building.

Construction will require closing Foulois Street later this month. Officials are targeting the end of 2007 as a completion date.

The project essentially will double the amount of fitness center space and bring it up to Air Force standards for a base the size of Yokota, Coleman said. Right now, the gym is about 25,000 square feet short of designated requirements.

Yokota has invested heavily in upgrading its current fitness center. The facility reopened in December after a $3.4 million renovation.

Hours of operation for the Samurai Fitness Center at Yokota Air Base, Japan: