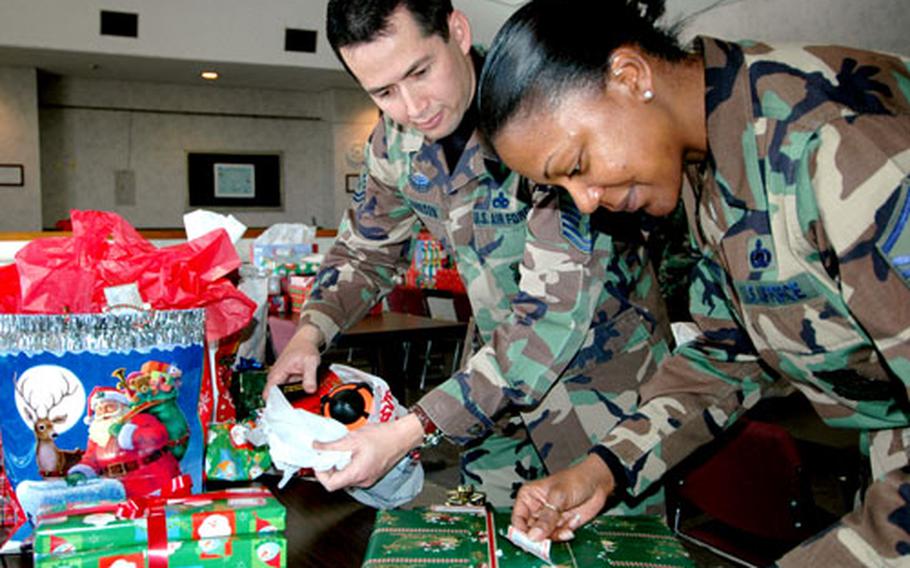 YOKOTA AIR BASE, Japan &#8212; The Yokota First Sergeants Council wanted to ensure no child missed out this Christmas.

In mid-November, first sergeants were asked to submit &#8220;Angel&#8221; cards containing the gender, age and gift preferences of families and children identified within each unit. The council maintained a master list but names were kept confidential.

The cards, handed out in the Yokota Community Center front lobby the day after Thanksgiving, disappeared quickly.

Yokota&#8217;s Family Support Center, which brought the U.S.-based &#8220;Angel Tree&#8221; program to Yokota about five years ago, served as a collection point for purchased gifts.

A total of 226 children were listed in the assistance drive, he said, but more than 300 presents arrived due to multiple contributions &#8212; including toys, clothes, books, CDs and DVDs.

Added his father, Ganpat Seunath: &#8220;We wanted to make someone else happy instead of selling the bike. It is the time of giving.&#8221;

Johnson said the gifts were wrapped Monday and delivered to families through unit first sergeants.

And the experience was extremely gratifying for the first sergeants, Hutchinson said.

&#8220;It also shows another side of the first sergeants, who are always thought of as being strict and demanding. Maybe this removes that stigma a little.&#8221;