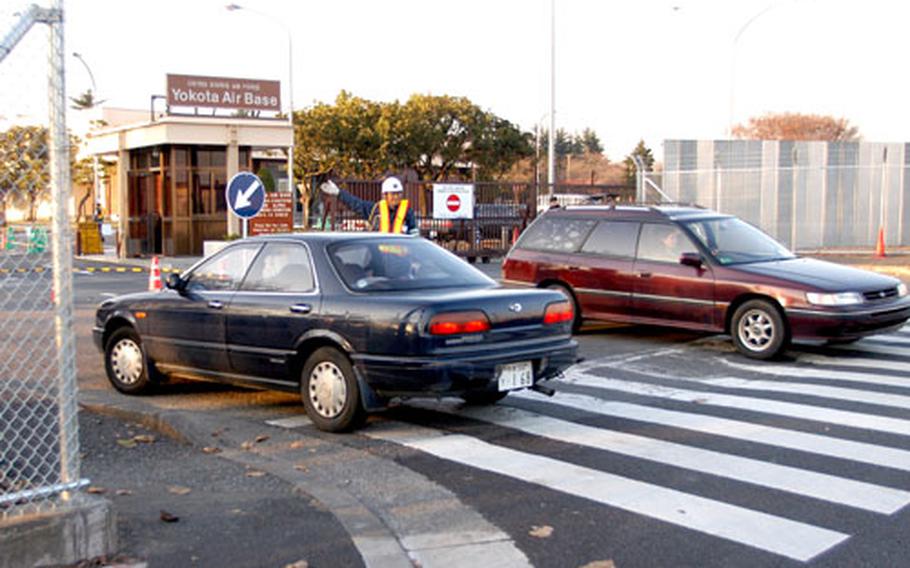 (NOTE: The following correction to this story was posted on Dec. 18:

A Dec. 17 story about construction at Yokota Air Base, Japan, was erroneous. Drivers will not be allowed to make right-hand turns while exiting either the West Gate or the Terminal Gate, 24 hours a day. The north lane is slated to reopen Jan. 17 at both the west and terminal gates, Raul Visaya, 374th Civil Engineer Squadron civil design chief, has said. The south lanes of both gates then will close from Jan. 17 until Feb. 29, he has said.

YOKOTA AIR BASE, Japan &#8212; Yokota&#8217;s westside motorists should plan for traffic delays through Jan. 17 as security improvements come to the west gate.

The north lanes of the gate closed to traffic Monday, said 374th Civil Engineer Squadron Chief of Civil Design Raul Visaya. The closure necessitated diversion of all vehicles &#8212; incoming and outgoing &#8212; through the south side of the gate, similar to the current traffic pattern across Highway 16 at the terminal gate.

But since the west gate&#8217;s south lane is narrow and cannot accommodate two-way traffic, Visaya said a gate in the adjacent visitor parking area was opened for in-bound westside traffic.

Base officials also are restricting westside right turns on to Highway 16.

&#8220;Traffic could back up to the fire station,&#8221; he said, noting that the north lane is slated to reopen Jan. 17 at both the west and terminal gates.

The south lanes of both gates will then close from Jan. 17 until Feb. 29, Visaya said.

Right turns from the west gate will remain restricted during peak hours, he said.

Motorists entering the base through the terminal gate also will be restricted from turning right onto Airlift Avenue, Visaya said, adding motorists will be able to turn around near the airport terminal.

The work on the terminal and west gates is the first phase of a $1.7 million project to upgrade all gates.

The project began earlier this fall with construction of a new guard shack at the terminal gate. That work is still under way.

The third and final phase will include the Fussa and south gates, Visaya said. Those gates will be under construction Aug. 1, 2004, through Jan. 31, 2005, he said.

&#8220;If a gate has to be closed, we will provide for pedestrian access,&#8221; he said, noting the Fussa gate is frequently used as a starting point for base residents walking to nearby shops and restaurants.

The gate work was designed by Pennoni Engineering and Environmental Services of Philadelphia and is being completed by Japanese contractors.