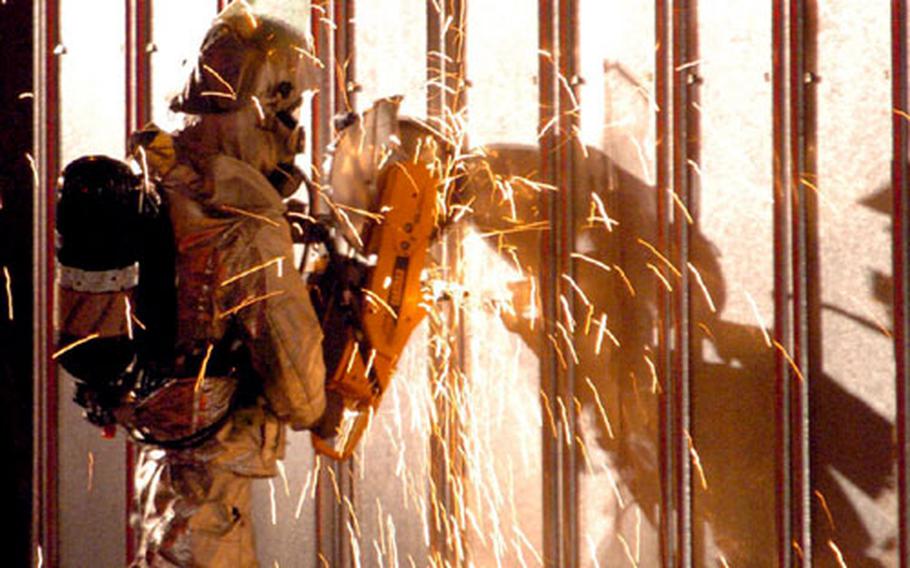 A Yokota Air Base firefighter uses a cutting tool in an attempt to control a blaze that gutted a vacant building about a block from the flight line Wednesday night. (Michael K. Atkinson / Courtesy of U.S. Air Force)

YOKOTA AIR BASE, Japan &#8212; A fire broke out Wednesday night in a building along Airlift Avenue that once housed on-base distance-learning classes offered by the University of Maryland.

The blaze, which started at about 9:15 p.m., sent smoke billowing skyward and snarled traffic along Yokota&#8217;s main thoroughfare. The area was blocked off by security forces as base personnel paused briefly from taking part in an Operational Readiness Exercise to deal with the real-world crisis.

According to a 374th Airlift Wing news release issued just before midnight, there were no injuries and damage was confined to Building 526, which had been scheduled for demolition in the future. The one-story building sits a block from Yokota&#8217;s flight line.

First Lt. Ben Alumbaugh, a wing spokesman, said the Yokota Fire Department responded but didn&#8217;t require outside assistance from local Japanese firefighters. Base officials apparently still were trying to determine a cause, he added.

They were asking residents to stay out of the vicinity until cleanup operations could be completed, though how long that might take remained unclear early Thursday morning.

In the nearby Main Fitness Center on Wednesday night, fire trucks and flashing lights were seen racing down Tunner Street and onto Airlift Avenue. Over the loudspeaker, a gym official at the front desk announced that a building in close proximity had caught fire.

A few minutes later, smoke could be smelled inside the fitness center. But the facility was not evacuated and closed at its regular time of 10 p.m.

Other details were not known at press time.