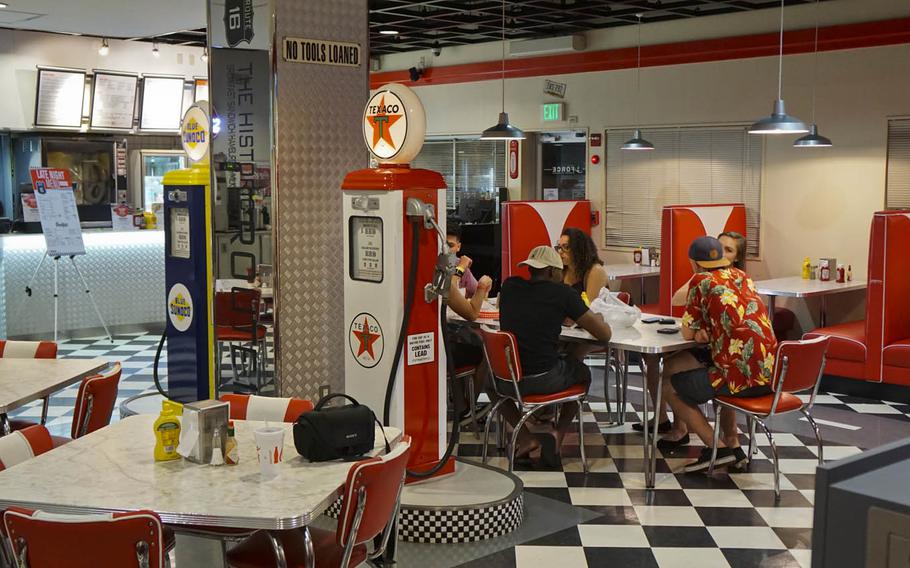 YOKOTA AIR BASE, Japan — A 1950s-style diner at the home of U.S. Forces Japan and 5th Air Force has expanded its hours in an effort to boost morale at the western Tokyo air base.

The move comes months after a “suicide prevention support team” visited Yokota and other Pacific bases in response to a spate of airman suicides last year.

The Pacific Air Forces team was “charged with conducting a thorough review of the programs, procedures and policies in place across several PACAF bases in order to ensure airmen have the tools to assist with maintaining their resiliency and comprehensive fitness,” an Air Force statement said.

One of the team’s findings was that airmen on swing and overnight shifts are among the most stressed and have a hard time unwinding because of a 1 a.m. curfew. They can’t go off base, and there isn’t much for them to do on base late at night.

Yokota, which formed its own team to look at ways to boost morale, identified Route 16 — an on-base eatery close to dormitories for unaccompanied airmen that serves burgers, chili-cheese dogs and other diner food — as the best option for 24-hour dining, said Maj. Melissa Danley, deputy commander of the 374th Force Support Squadron.

For now, the restaurant’s 24-hour schedule is offered only on weekends as a trial, she said. However, if there’s a good response, the base would like to expand it to include weekdays.

“I think this is great,” said Airman 1st Class Robert Gamboa, an aircraft maintainer with the 374th Maintenance Group. He and a group of airmen were enjoying a meal with milkshakes around 3 a.m. on Sunday.

“I hope they keep these hours,” said Gamboa, who added the base could feel like a prison after curfew because there was nowhere to go.

Yokota’s morale team also tagged the Yujo Community Center, a facility near the Base Exchange that offers a computer room and recreation activities like video games, as a good place to run 24-hour operations, Danley said. However, the Yujo is currently being renovated.

A tough job market for Air Force spouses at Yokota was another stress factor cited in the PACAF report.

Hutchinson, who described herself as a night owl, said the hours don’t interfere with spending time with her husband and three kids.

“We needed the money and this job is perfect,” she said.

The suicide-prevention team included a mix of experts from several PACAF installations and the Air Force Personnel Center, including mental and spiritual health specialists, resiliency and community readiness experts, and junior and senior enlisted airmen.

Three who took their lives at Yokota last year were all assigned to the 374th Maintenance Group. Overwork, especially in the maintenance group, was cited by some at a December meeting as a cause of stress.