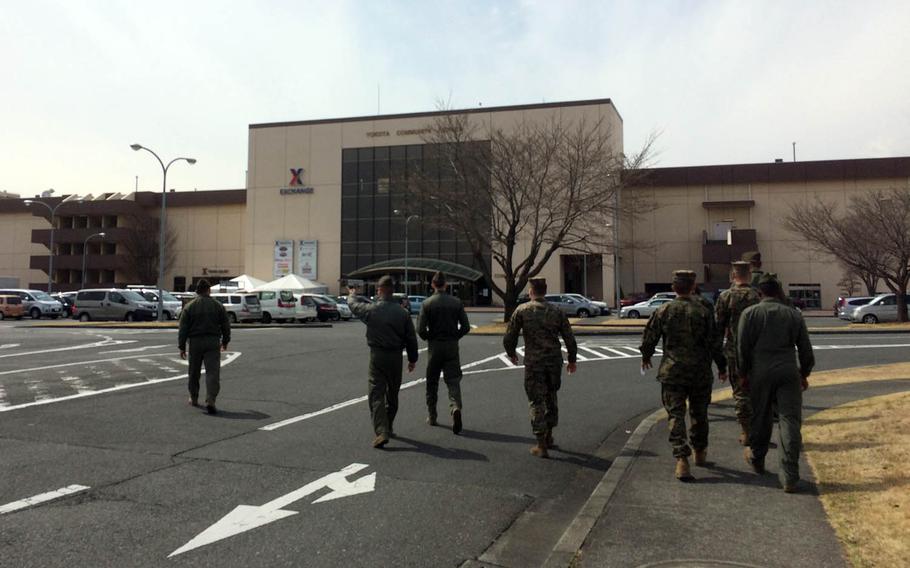 Buy Photo
Marines walk toward the Yokota Community Center at Yokota Air Base, Japan, where renovations are adding 25,000 square feet of space to the Base Exchange. (Seth Robson/Stars and Stripes)

YOKOTA AIR BASE, Japan — Twenty-five thousand feet of floor space is being added to the largest shop at Yokota in western Tokyo.

Renovations to the second floor of the Yokota Community Center will open space in the Base Exchange to accommodate goods that had been sold at the recently shuttered BXtra shop on the west side of the installation, officials said.

The building that housed the BXtra will be used to store Air Force equipment, said Capt. Mark Lazane, a 374th Airlift Wing spokesman.

Space inside the exchange is cramped but once the renovations are finished, by Columbus Day on Oct. 9, there will be plenty of room in a nearly 70,000-square-foot facility, officials said.

Shops and restaurants that were on the second floor of the community center are moving downstairs, Harris said.

“We never would have done this if the base hadn’t needed the (BXtra) building, but I’m excited the BX can be a one-stop shopping destination,” she said.

Meanwhile, the Pizza Hut inside the BXtra is still taking delivery orders, although its pickup window closed Apr. 30, said store manager Virna Narita. The restaurant is slated to move next to Banzai Burrito on Yokota’s east side in August or September, she said.