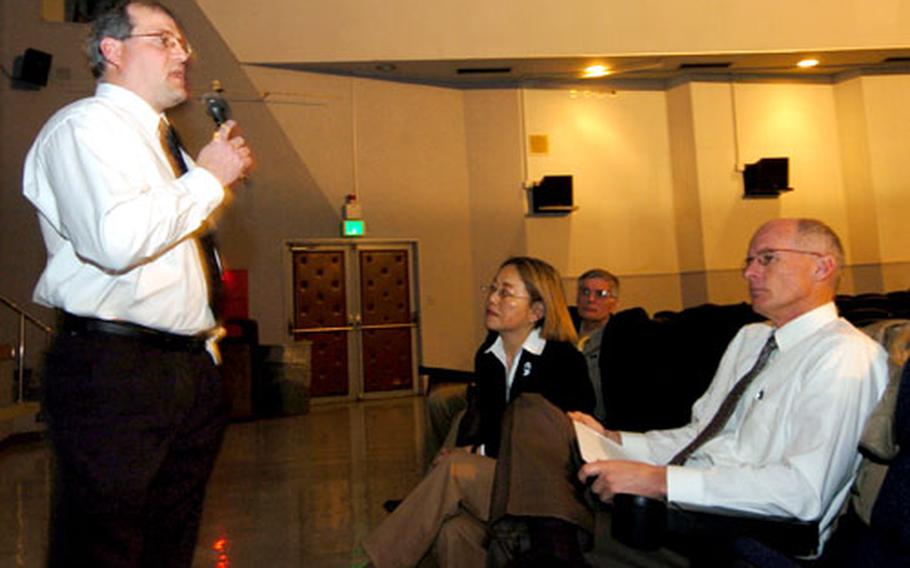 Gary Case, a specialist in asbestos and supervisor of the school’s asbestos cleanup, reports on the cleanup and on what precautions will be taken in future, at a town hall-type meeting about asbestos in the Yokota West Elementary School Media Center Wednesday night. (Christopher B. Stoltz / S&S)

YOKOTA AIR BASE, Japan &#8212; Engineers, base officials and school administrators told parents at a town hall meeting Wednesday that Yokota East Elementary School classrooms affected by last fall&#8217;s discovery of asbestos fibers in the nearby media center have no traces of the substance but when they might reopen remains unclear.

He said a report on testing and cleanup will be given to Yokota&#8217;s bioenvironmental group, which will conduct its own independent scrub and review before recommending a reoccupancy date.

Asbestos was found in insulation material on the media center&#8217;s roof during air-conditioning installation in July. Work stopped at once and the media center was sealed off. Adjacent classrooms were tested and cleared for occupancy in August.

But amid fears asbestos may have been tracked out of the media center, the 690-pupil school closed three days in early October. Eleven classes had to be moved to other locations.

The media center, a mechanical room and restroom had been tainted but all other rooms in Yokota East&#8217;s Building 4306 were declared safe, said engineer Gary Case with the Michael Baker Corporation&#8217;s environmental division, which has worked with DODDS on asbestos issues for about two decades and is spearheading the Yokota East effort.

As an extra precaution, he said, base and school officials opted to have a professional cleaning contractor meticulously scrub all the classrooms and their contents &#8212; everything from bins and books to desks and light fixtures.

Case said 34 rooms were cleaned and passed visual inspection. Of 170 air samples taken &#8212; five from each room &#8212; all were within acceptable standards.

More than 200 parents attended a town hall meeting in October. An Operational Readiness Exercise under way at Yokota this week limited Wednesday&#8217;s attendance to about 50 people.

Col. Scott Goodwin, 374th Airlift Wing commander, told the audience the base took &#8220;strong, positive measures&#8221; as soon as the problem surfaced. &#8220;There were cross-contamination concerns,&#8221; he said. &#8220;None was found in the classrooms but we cleaned the rooms anyway. We&#8217;ve done a thorough job in eliminating the risk.

Another parent suggested symptoms of exposure &#8220;may not show up until years later.&#8221;

Lt. Col. William Thomas, 374th Aerospace Medicine Squadron commander, said, &#8220;Given the extraordinarily low samples found, it&#8217;s unlikely there&#8217;ll be any health repercussions. &#8230; These rooms were safe by the standards measured before the cleaning and they&#8217;re safe after the cleaning.&#8221;