Airman 1st Class Ben Hosbein, a firefighter at Yokota Air Base, was fitted with a fully-encapsulated ventilator mask before descending into a manhole during an earthquake exercise Thursday at Yokota. (Jennifer Svan / S&S)

Airman 1st Class Ben Hosbein, a firefighter at Yokota Air Base, was fitted with a fully-encapsulated ventilator mask before descending into a manhole during an earthquake exercise Thursday at Yokota. (Jennifer Svan / S&S) 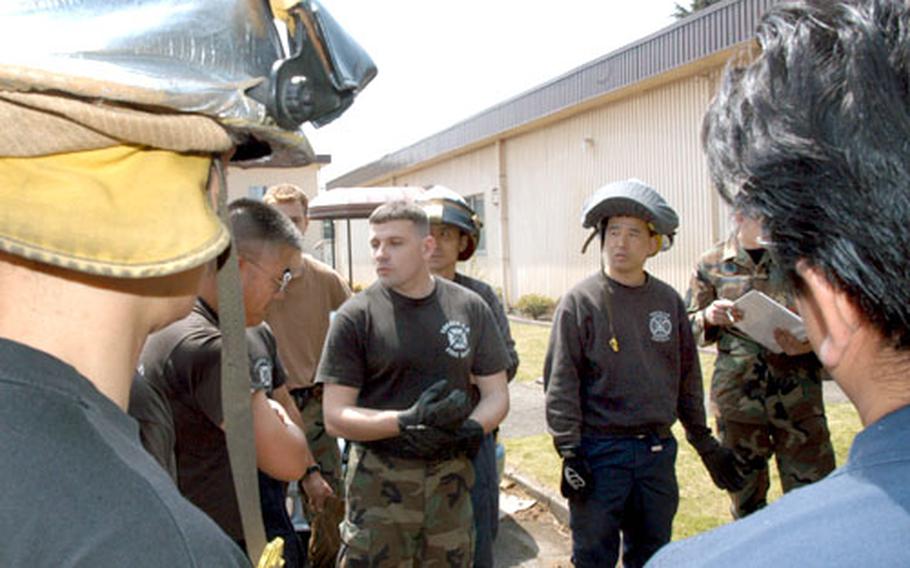 Tech. Sgt. Karl Wiegand demonstrates how to use a "Sked" stretcher during the earthquake exercise. The stretcher rolls up and fits into a backpack, making it ideal for mountain or confined-space rescues. (Jennifer Svan / S&S) 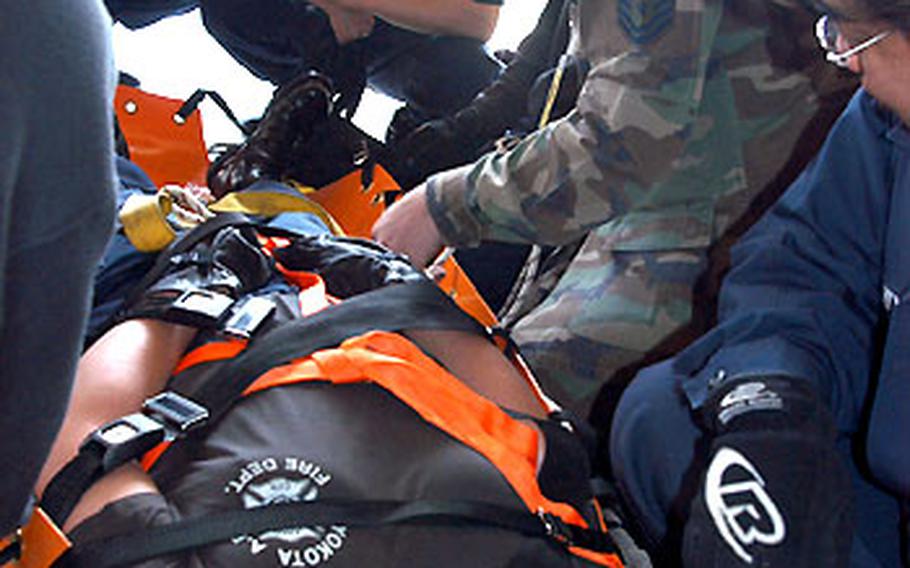 YOKOTA AIR BASE, Japan &#8212; On the day a 7.0-magnitude temblor rocked Tokyo, members of Yokota Air Base&#8217;s fire department climbed down a manhole.

There&#8217;s no better occasion to practice confined-space rescue than during an earthquake exercise, say firefighters.

The earthquake was simulated, part of a drill. But working in tight spaces is a very real part of military life, from repairing a cable in an underground tunnel to maintaining fuel cells in an aircraft tail. If a person becomes stuck or faints from fumes, Yokota&#8217;s fire department would be called to rescue duty.

Thursday, most of the base practiced responding to the fictitious 6 a.m. earthquake. The scenario: Resident towers on the east side were destroyed and about 200 U.S. Embassy employees had to be evacuated to Yokota. Airmen were drilled on jobs including determining services to provide those left homeless and handling a deluge of media queries.

One of the fire department&#8217;s tasks: Rescue a maintenance worker who broke his leg in a manhole when the earthquake struck. Or, in this instance, rescue a plastic dummy dropped more than 12 feet underground.

Despite the prevalence of crawl spaces on military bases, accidents are rare, said Master Sgt. Derrick Joe, assistant chief of safety and special operations for the fire department, part of the 374th Civil Engineer Squadron. He&#8217;s been at Yokota for less than two months but said he could recall no significant confined-space mishaps during his entire career.

Joe chalks it up to training.

At Yokota, fire department, safety and bio-environmental team members annually inspect every manhole on base, he said. They monitor available oxygen and check for hot electrical wires and any other immediate dangers to life or health. They teach 374th CES team members how to enter the holes safely; CES, in turn, develops a master entry plan.

An actual rescue, they said, can be just as complicated.

Thursday, Airman 1st Class Ben Hosbein was designated the first firefighter to descend the manhole. He suited up in a harness and a fully encapsulated ventilator mask attached to an oxygen hose. Another firefighter grabbed the other end of a long rope hitched to Hosbein&#8217;s back, to lower him underground and keep a strong hold in case of a problem.

Reviewing the equipment and outfitting Hosbein and a Japanese civilian firefighter with the rescue gear took more than an hour &#8212; a long time for someone with a broken leg to wait.

But as Wiegand explained, this was training, and the firefighters used the opportunity to be thorough.