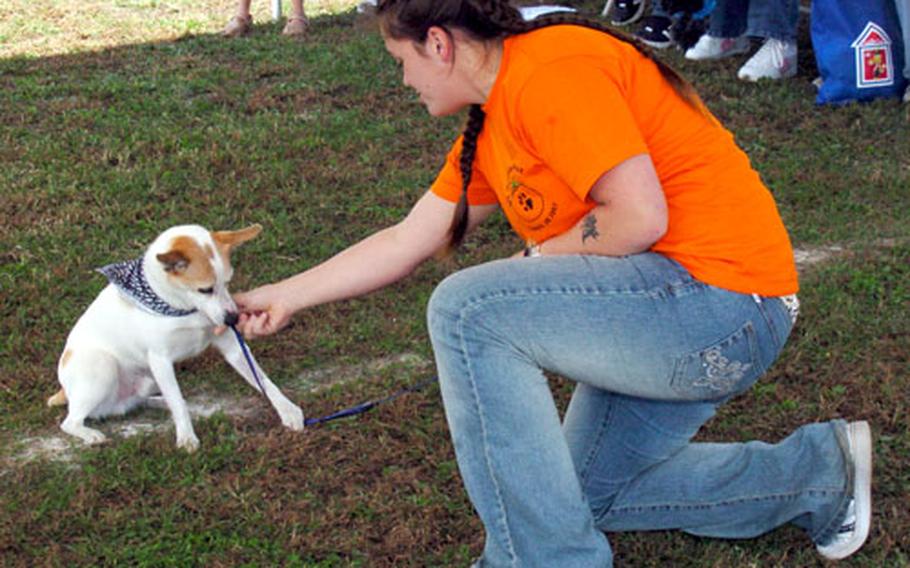 Pfc. Kimberly Thompson gives her dog "Scooter" a treat during the talent competition at “Puptoberfest 2007” on Saturday at Yokota Air Base. (Christopher B. Stoltz / S&S)

Pfc. Kimberly Thompson gives her dog "Scooter" a treat during the talent competition at “Puptoberfest 2007” on Saturday at Yokota Air Base. (Christopher B. Stoltz / S&S) 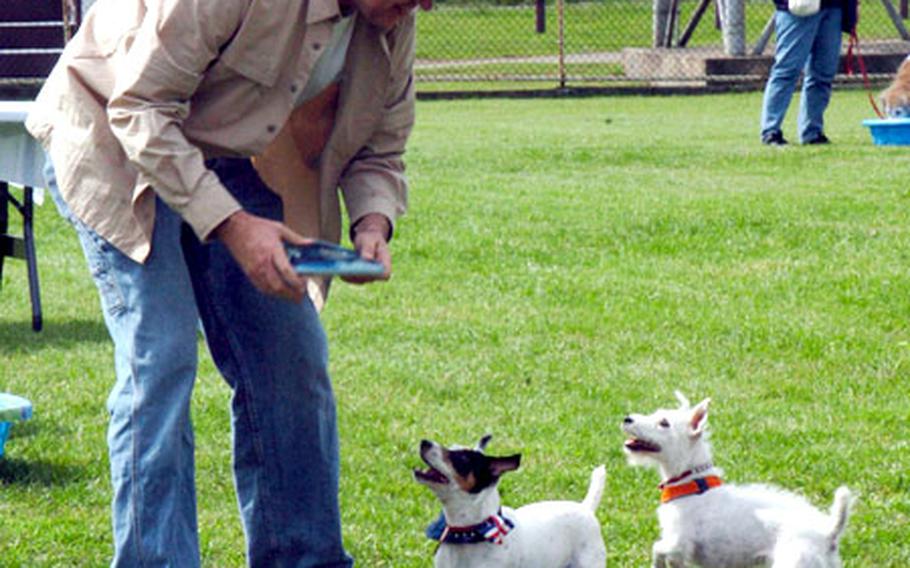 Gary Dezell throws a Frisbee to his dogs, Milo and Shilo, during the talent competition at “Puptoberfest”on Saturday at Yokota Air Base. (Christopher B. Stoltz / S&S)

YOKOTA AIR BASE, Japan &#8212; The dogs finally had their day at Yokota.

Dozens of owners trotted their pets out to &#8220;Puptoberfest 2007&#8221; on Saturday, a K-9 jamboree that featured contests, activities and giveaways. A demonstration by security forces military working dogs also was held.

&#8220;I&#8217;m extremely pleased with the turnout today,&#8221; said Army Staff Sgt. Francesca Ross, noncommissioned officer in charge of the Japan District Veterinary Command, who helped organize the show. &#8220;Everybody is having a great time. ... The owners really enjoyed the games. They wanted to show off their dogs a little.&#8221;

A treasure hunt, sit-and-stay obedience event, and bobbing for ducks in a pool were among the contests.

Ross says she was part of dog festivals during past assignments in Italy and North Carolina, but this marked her first at Yokota. She credited Army Spc. Steven Allen, a co-worker, for bringing Saturday&#8217;s showcase together.

Christina Greene and her husband, Martin, a first lieutenant and UH-1 pilot for the 459th Airlift Squadron, had no intentions of putting their 4-year-old beagle/Siberian Husky mix up against the other dogs that turned out. But when organizers announced the &#8220;Most Unique Pet&#8221; contest, she said they couldn&#8217;t resist.

Senior Airman Aneisha Knight of the 374th Operations Support Squadron had to work Saturday but dropped by during her lunch break with &#8220;Champ,&#8221; her 2-year-old Yorkie.