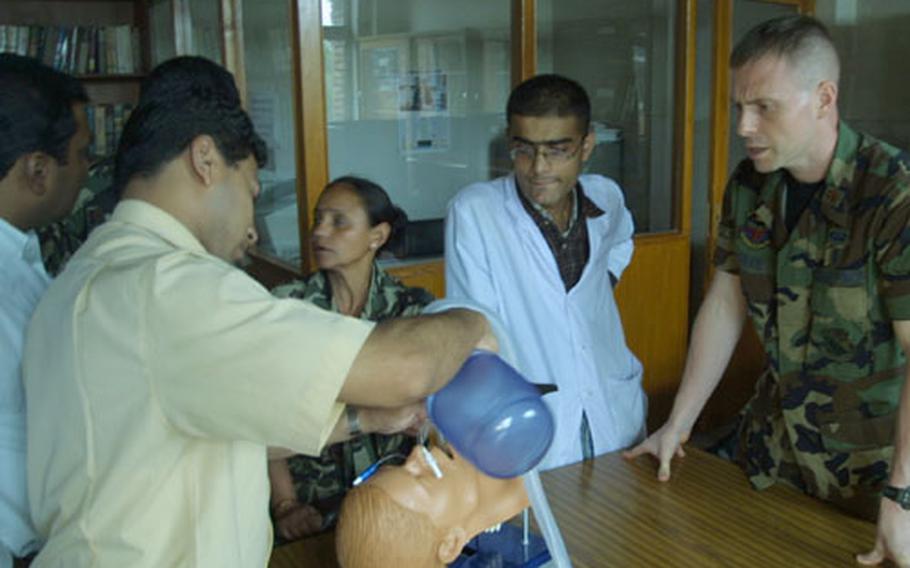 Maj. Troy Osborn, right, an anesthesiologist with the 374th Medical Group at Yokota Air Base, Japan, directs a Royal Nepalese Army medical student in the proper insertion of a breathing tube. (Courtesy of USAF)

YOKOTA AIR BASE, Japan &#8212; Maj. Troy Osborn, an anesthesiologist with the 374th Medical Group here, was among a small team of U.S. military medical professionals who recently shared tools and techniques with Nepalese student doctors and nurses.

Osborn returned from Kathmandu in late September after a week of helping train 33 Nepalese in trauma, critical care and para-rescue medicine.

Indeed, partnership building through health care appears to have been one of the primary goals of the mission.

The tiny Asian mountain kingdom in the Himalayas is in the midst of a violent political struggle. Since the end of a cease-fire several months ago, Maoist insurgents are &#8220;starting to come into Kathmandu more,&#8221; Osborn said, adding that a temple was bombed while the U.S. military team was there, and several Nepalese soldiers were killed.

The Nepal program was one of the Defense Institute for Medical Operations&#8217; deployable courses based on the &#8220;train the trainer&#8221; concept, according to DIMO officials.

DIMO was established in September 2002 when the Air Force&#8217;s Institute for Global Health merged with the Navy&#8217;s Defense Healthcare Management Institute. The agency falls under the International and Expeditionary Education and Training Department of the Air Force&#8217;s School of Aerospace Medicine at Brooks City-Base, Texas. Its goal is to become the Defense Department&#8217;s focal point for exportable health-care training programs that improve communications between military and civilian agencies and strengthen international coalition partnerships, according to DIMO officials.

The course was funded by the International Military Education and Training program &#8212; a component of U.S. security assistance that provides training on a grant basis to students from allied and friendly nations. Funding is appropriated from the International Affairs budget of the State Department, and the Defense Department implements the program. Students are exposed &#8220;to the U.S. professional military establishment and the American way of life, including among other things, U.S. regard for democratic values, respect for individual and human rights and belief in the rule of law,&#8221; according to information from DIMO.

The military team trained mostly medical students with the Royal Nepalese Army. Mornings were spent in lectures, while afternoons were dedicated to hands-on training, said Osborn, who taught students the proper way to insert a breathing tube and how to manage airway emergencies.

Osborn, the only Pacific Air Forces representative, also led labs where anesthesiology procedures were practiced on goats and cadavers.

Sometimes the team had to improvise, as the Nepalese lacked some modern medical equipment.

The course culminated in a mass casualty exercise, where Nepalese students diagnosed injuries, treated what they could in the field and later triaged &#8220;patients&#8221; at the hospital, while the military doctors evaluated their work.

The Nepalese students were mostly young doctors and nurses who soon will be assigned to remote field hospitals throughout Nepal.

It was the second time for the Nepal course; the team trained there in August 2002 and was requested back in 2004.