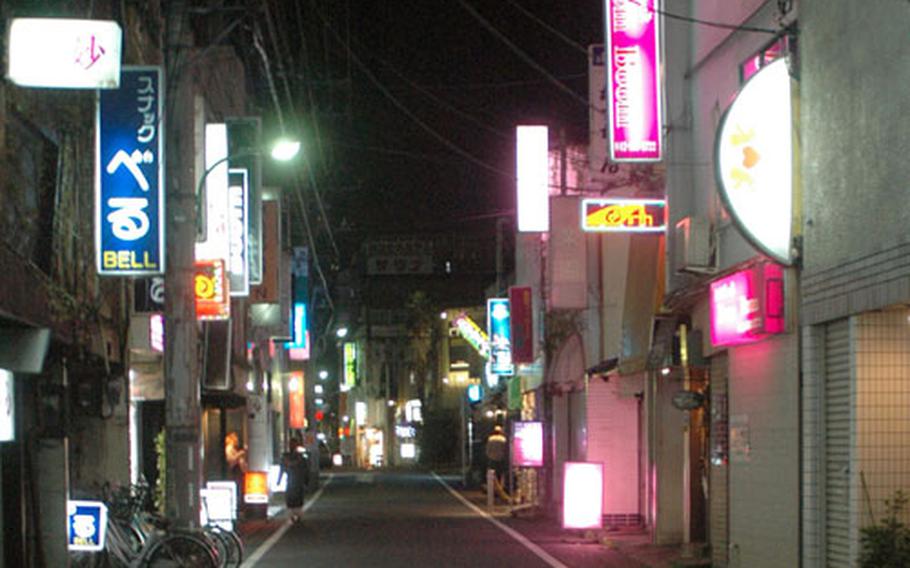 YOKOTA AIR BASE, Japan &#8212; Among bar owners, &#8220;curfew&#8221; might be more familiar than the bright neon signs that light up their establishments when day gives way to night and people start roaming the streets.

Only these days, far fewer Americans are among them.

Col. Mark Schissler, the former Yokota commander, issued the indefinite order May 9, 2005, after a string of incidents and fights linked to base personnel. It prohibits all Yokota servicemembers from being within a block of Akasen-dori &#8212; which lies near Honcho-dori and Fujimi-dori between the base and Fussa Train Station &#8212; for five hours every night.

His successor, Col. Scott Goodwin, has seen no reason to lift it.

&#8220;The curfew along Bar Row has had an impact on the amount of incidents causing injuries to our airmen,&#8221; said Goodwin, who added he expects dependents, civilians and contractors on base to abide by the curfew.

Although the base doesn&#8217;t have a study tracking a reduction in incidents or injuries involving Yokota residents on Bar Row, officials say there has been a 20-25 percent drop in on-base drunken driving incidents.

Yokota also hasn&#8217;t received a noise complaint from Fussa authorities since the curfew began, officials said. While the city also had no specific numbers, a Fussa official who deals with base affairs said the Bar Row area has become quieter.

A Tokyo Metropolitan Police spokeswoman declined to comment on the ban, saying it&#8217;s not in a position to evaluate the policy. But there have been no incidents involving American servicemembers on Bar Row since the curfew came down, she said.

Base officials have conducted random sweeps of the area to enforce the restriction. In October 2005, about a dozen airmen were found in violation. Most received various administrative actions.

Capt. Paul Talley, head of urgent care at the Yokota Medical Treatment Facility, said his clinic treated several airmen involved in fights on Bar Row before the curfew, but &#8220;incidents are rare at best now.&#8221;

Regardless, there&#8217;s been a drastically different feel along Bar Row since the curfew, he said.

&#8220;A lot of innocent people got affected &#8212; shift workers, young people, all the good airmen, and most importantly, Japanese business people,&#8221; Talley said.

&#8220;There is something great about sitting alongside the local people and workers &#8230; sharing a beer, some great eats and karaoke songs. It is a very real part of modern Japanese culture. It is strange to be always checking your watch, then just leave.&#8221;

But a female airman first class assigned to the 374th Security Forces Squadron, who asked not to be identified, said the curfew could simply just be moving the problem to somewhere else in the Tokyo area.

Keeping airmen near Yokota also makes them less inclined to drive, she said, reducing chances for accidents and DUIs.

YOKOTA AIR BASE, Japan &#8212; While Yokota and Fussa officials praise the &#8220;Bar Row&#8221; restriction&#8217;s effectiveness in eliminating problems linked to base community members, bar owners and some airmen say it&#8217;s punishing the majority for the actions of a few bad seeds.

The measure also has hurt the business of several longtime establishments and even shut down others.

In addition, they claim it&#8217;s merely pushing the same troubles outside the three-block area &#8212; and farther away from the base &#8212; to places such as Hachioji, Tachikawa and Roppongi, where they say the potential for trouble is greater.

Kacchan Yasumoto, 63, has operated Yumi&#8217;s Bar for 40 years, catering to U.S. troops since the Vietnam War. He says Yokota personnel made up 80 percent of his customer base before the ban, but that&#8217;s virtually vanished the last two years.

Nozomu Takahashi and his wife, Kumiko, bought The Chicken Shack in 1989. The place features bands five nights a week and attracted many Americans before the curfew.

Capt. Warren Comer, Yokota&#8217;s 374th Airlift Wing spokesman, said base officials &#8220;sympathize with the hardships that some business owners are facing.&#8221; But the curfew was something that had to be done to protect airmen from &#8220;being in the wrong place at the wrong time.&#8221;

&#8220;The Bar Row restriction was placed in effect not because of the bars themselves, but because of the overwhelming number of incidents that occurred outside on the street along the Bar Row area,&#8221; Comer said.