Yokota couples eating octopus for a cause 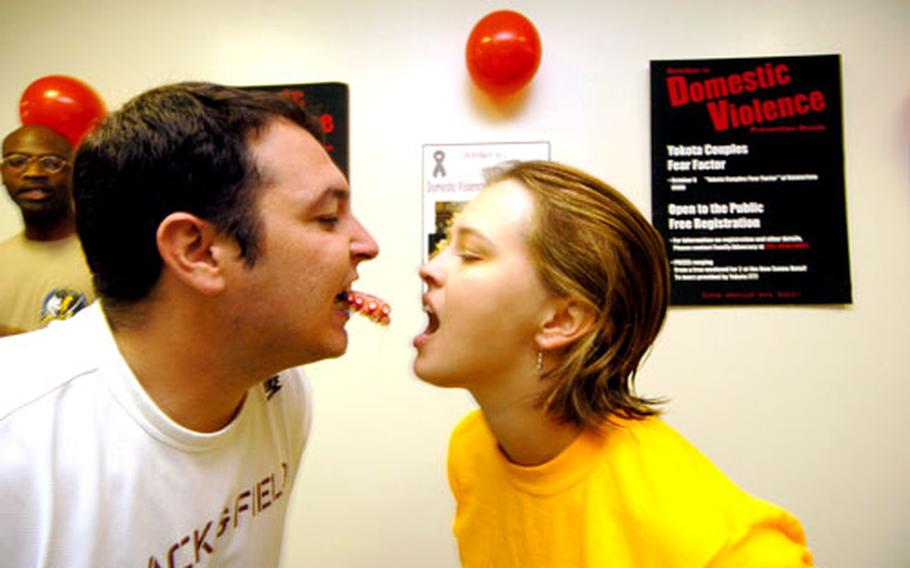 Beau and Annah Veazey, both teachers at Yokota Middle School, eat octopus as part of a couples fear factor challenge at Yokota Air Base, Japan, on Saturday. The event was hosted by Yokota’s Family Advocacy Program as a way to enhance public awareness and help stem domestic abuse within the military community. (Christopher B. Stoltz / S&S)

Beau and Annah Veazey, both teachers at Yokota Middle School, eat octopus as part of a couples fear factor challenge at Yokota Air Base, Japan, on Saturday. The event was hosted by Yokota’s Family Advocacy Program as a way to enhance public awareness and help stem domestic abuse within the military community. (Christopher B. Stoltz / S&S) 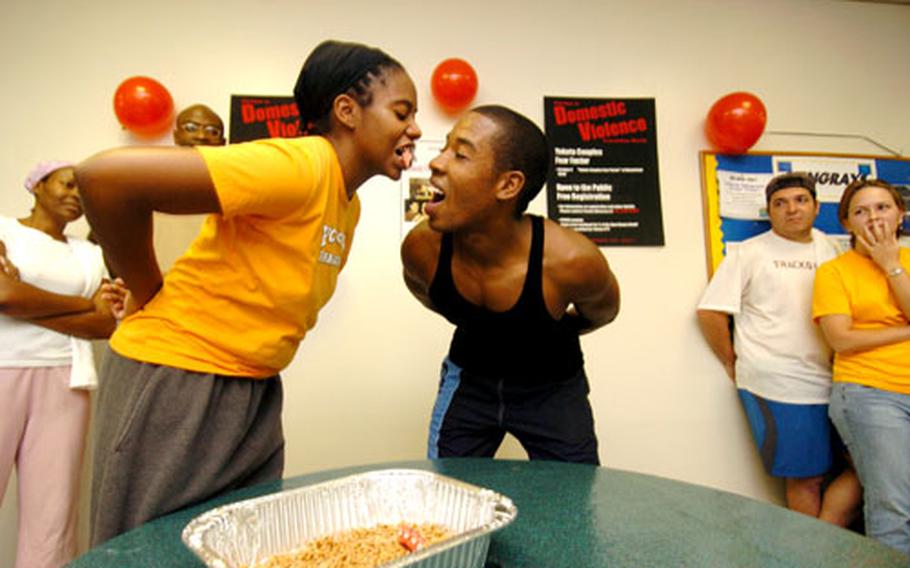 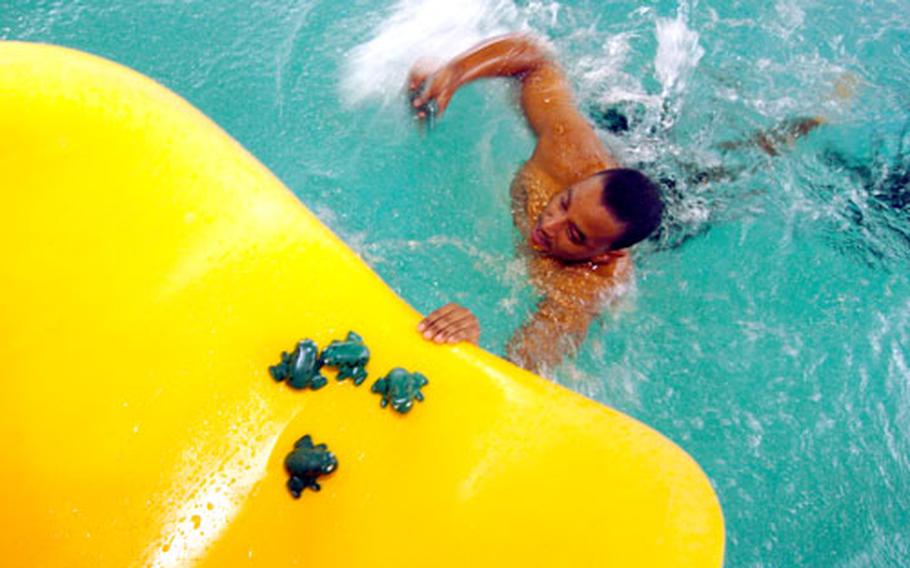 For five couples, that meant eating octopus smeared with a smelly paste, diving for frogs at the bottom of a pool and testing marital communication lines in front of about 50 spectators.

It was all part of the first annual &#8220;Yokota Couples Fear Factor,&#8221; held Saturday at the base natatorium in recognition of Domestic Violence Prevention Month.

In the end, Chris and Nicole Curry emerged from the pack, edging out Emille and Zenziwe Bryant in the finals to claim the grand prize: a free weekend at the New Sanno Hotel in Tokyo, Yokota Information Tickets and Travel tour, plaque and $20 gift certificates to Charlie T&#8217;s restaurant at the Enlisted Club and the Bangkok Express shop.

&#8220;We wanted to get out and see how well we know each other &#8212; and take part in some physical and mental challenges,&#8221; said Chris Curry, an airman first class assigned to the 374th Operations Support Squadron.

Inspired by the NBC reality television show, the event was hosted by Yokota&#8217;s Family Advocacy Program as a way to enhance public awareness and help stem domestic abuse within the military community.

&#8220;We thought it would be a great way to bring people out and recognize that October is Domestic Violence Prevention Month nationwide,&#8221; he said. &#8220;Most couples edify and lift each other but one person being assaulted or abused is too many.&#8221;

Saturday&#8217;s showdown began with a physical challenge as the husband-wife teams scoured the pool to find five toy frogs organizers tossed in.

It digressed into the phase that typically turns the most heads, if not many stomachs. Contestants had to ingest a ghastly concoction of octopus and Japanese natto beans, a fermented soy paste that emits a rather rude odor. All but one couple managed to get it down.

The Currys and Bryants owned the fastest times at the end of two stages to reach the finale, where they had to answer questions about each other in a session that was a cross between &#8220;The Dating Game&#8221; and &#8220;The Newlywed Game.&#8221; Topics ranged from favorite colors and foods to details about first dates.

The competition was rewarding on many levels, he added.

The Currys, who&#8217;ll mark their third anniversary in November, also had some advice for a successful marriage.

Beau and Annah Veazey finished third Saturday. The other contestants were Marcus and Valerie Avalos and Edward and Donna Bowman. All received consolation prizes.

In another activity marking Domestic Violence Prevention Month, Yokota&#8217;s Family Support Center will conduct an Alcohol Awareness Class at 5 p.m. Thursday, Oct. 13. Alcohol is a factor in more than 50 percent of all domestic-violence cases, according to Hugh Clark, Yokota&#8217;s Family Advocacy outreach manager.

Throughout October, information booths will be set up at the Family Support Center with brochures and pamphlets about domestic abuse.