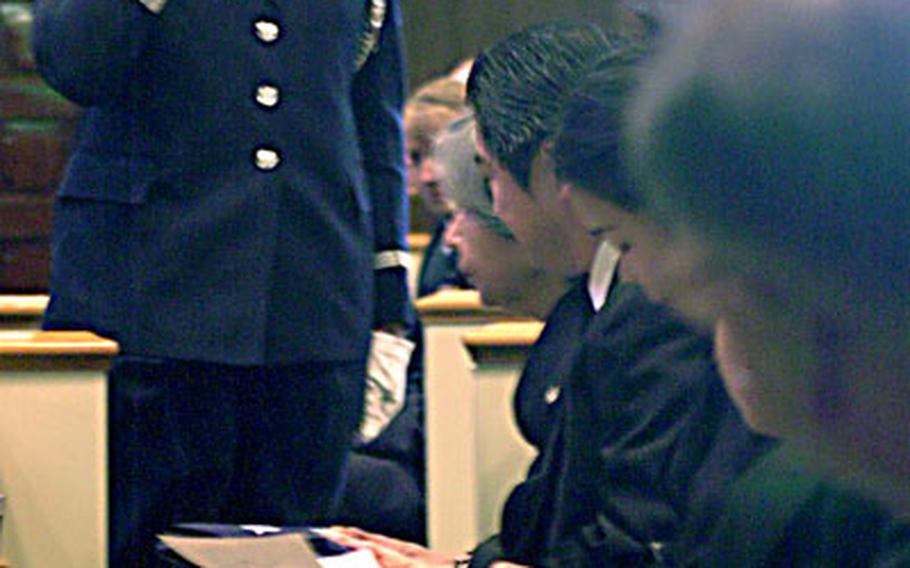 A servicemember attached to the 374th Security Forces Squadron presents an American Flag to the family of Takahiro Ichikawa. (Christopher B. Stoltz / S&S)

YOKOTA AIR BASE, Japan &#8212; Family, colleagues and base leaders gathered Thursday at the Traditional Chapel for a brief but moving tribute to the longtime Japanese chief of the 374th Security Forces Squadron&#8217;s police liaison office.

Takahiro Ichikawa served almost six decades with the U.S. government, including the last 55 years at Air Force installations around Tokyo. The 77-year-old died Feb. 13 at his home in Fussa City, a short distance by foot to the base he worked at since June 1970.

Few Americans may have known him better than Col. James Brophy, U.S. Forces Japan provost marshal and 5th Air Force security forces director. The two first met in 1981 when Brophy &#8212; then a freshly minted first lieutenant &#8212; was a shift commander for the former 475th Security Police Squadron at Yokota.

It was Brophy&#8217;s second assignment and first overseas, and the men developed both a professional relationship and a friendship.

&#8220;He was a very dignified and humble gentleman,&#8221; Brophy said after Thursday&#8217;s memorial service, attended by about 200 people. &#8220;The U.S. and Japan had no better friend, no truer leader, than Mr. Ichikawa in bridging our two cultures. Both of our countries suffered a huge loss when Ichikawa-san passed away.&#8221;

At World War II&#8217;s close in June 1946, Ichikawa became a translator and interpreter for the U.S. Army&#8217;s occupation forces in Musahimurayama City, about five miles from Yokota. After picking up a degree from the prestigious Chuo Law School in 1951, he worked as an adviser to the U.S. provost marshal at Tachikawa Air Base. He was a security forces consultant at several air bases in Tokyo in the 1950s and 1960s, including former U.S. installations Fuchu and Johnson.

&#8220;There&#8217;s a long line of leaders in the security forces career field &#8212; past and present &#8212; that owe their success directly to Ichikawa-san&#8217;s humble advice and mentorship,&#8221; Brophy said. &#8220;He was a true teacher and mentor who took the time to help instruct and advise his commanders and other members on how to best communicate and build strong relationships with our Japanese counterparts and hosts.&#8221;

Ichikawa had friends in high places, a network of influential Japanese officials that significantly bolstered the security of U.S. bases, servicemembers and their families, Brophy added.

&#8220;Ichikawa-san helped all our U.S. facilities here in Japan,&#8221; he said. His time in law school &#8220;with many individuals who went on to senior positions within the Japanese government and in private industry enabled him to call and communicate with them. As a result, we were able to receive just truly outstanding support for our security.&#8221;

&#8220;The only good news,&#8221; Brophy said, &#8220;is that &#8230; the alliance will only grow stronger because of his efforts to mentor and educate Americans on how we should communicate and cooperate with our Japanese counterparts and friends.&#8221;