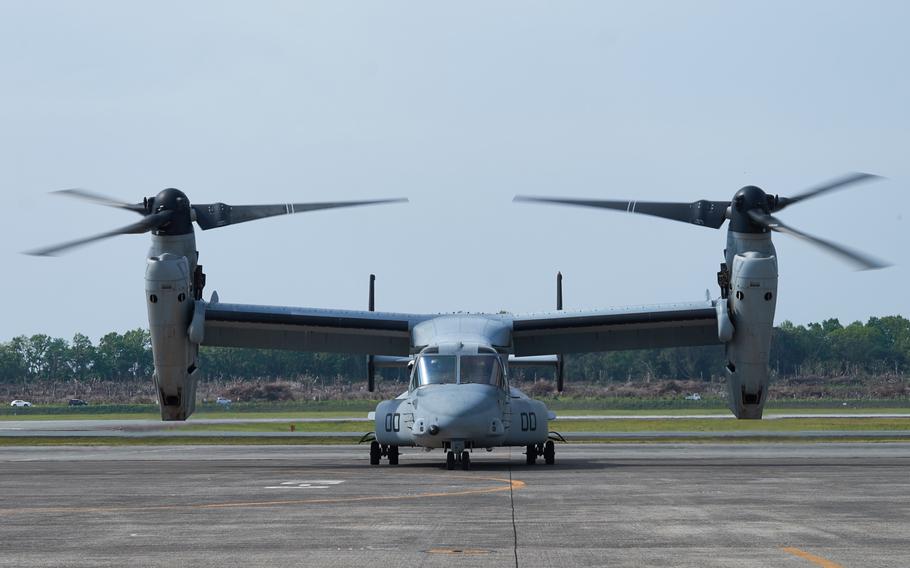 A U.S. MV-22 Osprey tilt-rotor aircraft lands at Camp Takayubaru in Kumamoto, Japan, on Wednesday, April 20, 2016. Civilian workers and their families are being asked to move to make room for military personnel as Yokota Air Base prepares for the arrival of a squadron of the aircraft. (James Kimber/Stars and Stripes)

YOKOTA AIR BASE, Japan — Forty-six civilian workers and their families are being asked to move to make room for active-duty military personnel as the base prepares for the arrival of a squadron of CV-22 Osprey tilt-rotor aircraft.

In a memo to the affected civilians last week, 374th Airlift Wing commander Col. Douglas C. DeLaMater said the Air Force had reduced the number of authorized family housing units on Yokota from 2,635 to 1,611.

The reduction forced the base “to make tough resourcing decisions,” he said in the memo.

Yokota will receive an influx of more than 1,100 personnel over the next few years along with a Special Operations Squadron of 10 Ospreys.

Already home to 11,500 personnel, the base — which houses U.S. Forces Japan and the 5th Air Force — will see a 10 percent population boost with the new arrivals, DeLaMater said in an interview in late December.

Air Force rules state that civilians who are not key and essential personnel may not live in military family housing for more than five consecutive years, he said.

Longer wait lists for on-base housing and a decrease in the housing inventory has forced Yokota to come in line with the policy, he said.

“These upcoming changes are great news for Yokota and the Air Force but, unfortunately, require civilians who have resided in non-surplus housing for more than five years, a very small percentage of civilians living on base, to vacate their quarters to make way for new applicants,” he said.

The civilians have 60 days to move and were required to report to the base housing office by Friday to hear their options, which include exercising rights to return to the U.S., moving off-base or moving into surplus military housing elsewhere on Yokota at government expense, DeLaMater said.

Those who choose to live off-base will receive living quarters allowance according to their government service grade, he said.

“I understand this is unwelcomed news and am sympathetic to the fact that living on Yokota AB is a great way of life,” he said. “However, resource constraints compel us to manage out MFH (military family housing) in such a way that maximizes benefits to all.”

Yokota spokesman 1st Lt. Nathaniel Roesler said the affected civilians can move to a tower block on the west side of the base that is classed as excess inventory, meaning less money is available to maintain it.