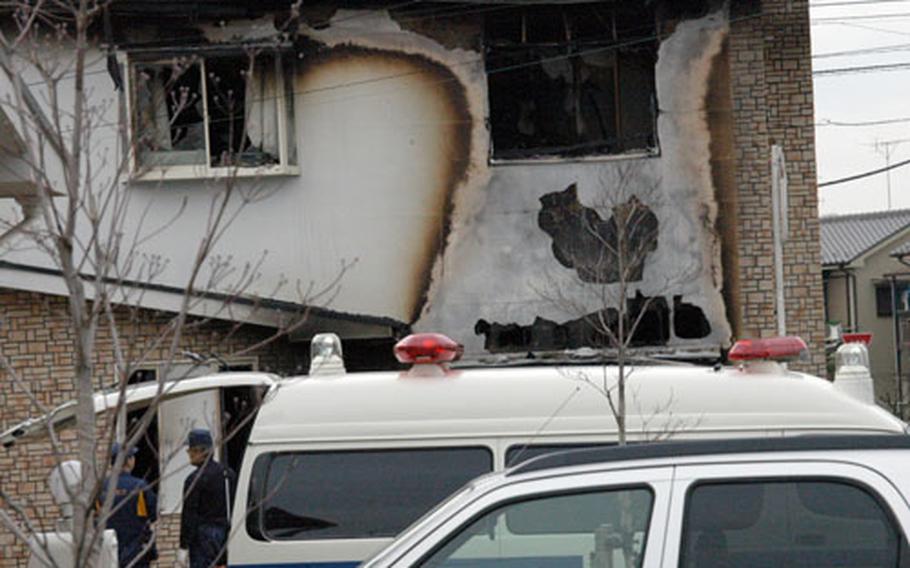 Japanese authorities investigate the charred remains of a two-story unit at the Bel Air Plaza housing complex in Hamura, which borders Yokota Air Base. A U.S. civilian who worked for the 374th Services Division was killed in the fire, which broke out early Saturday. (Vince Little / S&S)

YOKOTA AIR BASE, Japan &#8212; A U.S. civilian who worked for the 374th Services Division was killed early Saturday in a fire at his off-base home in nearby Hamura.

Camille LaRoche, 46, was pronounced dead at a hospital in Ome at 1:40 a.m., a Fussa police spokesman said. He was alone in the house and no one else was hurt in the blaze, which started at about 12:15 a.m.

&#8220;Our thoughts and prayers go out to his family at this tragic moment,&#8221; Col. Jeff Newell, the 374th Airlift Wing commander, said in a news release.

LaRoche was found upstairs in the bedroom of his two-story house. Police discovered a kerosene fan heater and fuel tank in another bedroom.

Japanese authorities are investigating the cause of the fire.

Jay Reynolds, a longtime friend and neighbor, said he heard two large explosions while watching television in his living room at about 12:30 a.m. Saturday.

After checking the road next to Bel Air Plaza&#8217;s entrance, Reynolds came back inside. But then he noticed an &#8220;orange glow&#8221; out his back window, he said. He saw the flames outside and told his wife to call the fire department.

A female neighbor who asked not to be identified said she was awakened by her husband after Japanese emergency responders announced their housing complex&#8217;s street address over a loudspeaker.

LaRoche and his Japanese wife had separated on Christmas Day, according to Reynolds. He said she and their two children had gone to stay with her mother.