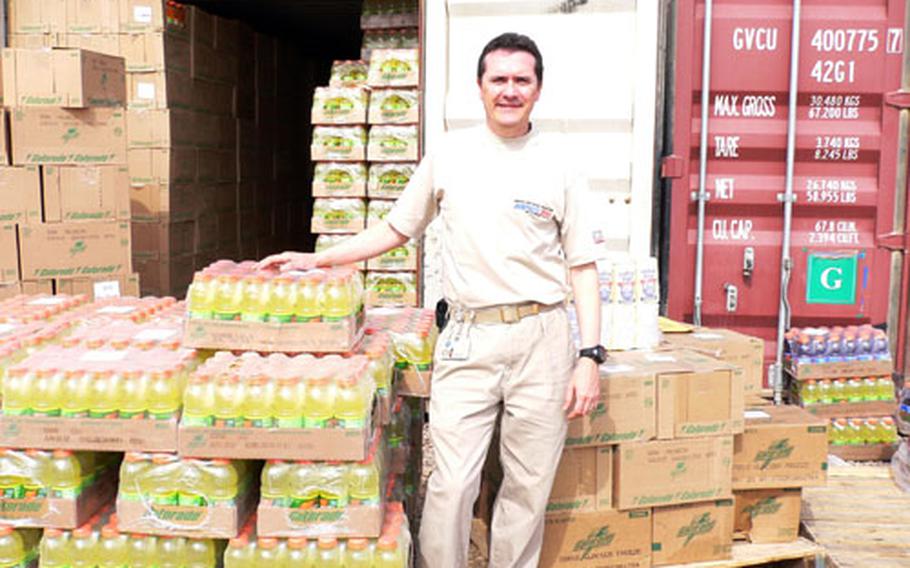 Mark Neely, AAFES main store manager at Yokota Air Base, Japan, stands in the container yard outside of the Balad East PX at Balad Air Base, Iraq, where Neely was deployed from February to August. (Courtesy of Mark Neely)

YOKOTA AIR BASE, Japan &#8212; Yokota airmen who were deployed to Balad Air Base in Iraq between February and August might have noticed a familiar face when they entered the base exchange.

It wasn&#8217;t his first time to deploy with AAFES; in 1997 he went to Bosnia in support of Operation Joint Guard.

AAFES deployments are done on a volunteer basis.

Once in Iraq, Neely said there were a few major differences from his experience in Bosnia, including a more built-up infrastructure in Iraq.

Also in Iraq, there were no local nationals working for AAFES like there were in Bosnia, he said.

Instead, many of the employees working there were from other countries, including the Philippines, India, Ethiopia and Nepal.

The biggest difference, Neely said, is that it is very difficult to get merchandise into Iraq, especially when ordering items that have a shelf life.

&#8220;As soon as you order something, the clock is ticking,&#8221; he said, explaining that it can take more than 12 weeks for product to be delivered to Iraq.

One group of items at the store, canned energy drinks, were so popular that their distributor could not keep up with demand.

&#8220;We were selling over 3,000 cans a week,&#8221; Neely said, adding that AAFES had to temporarily work with other distributors just meet demand.

Neely said that being in Iraq was personally rewarding because he felt he was able to help the morale and well-being of servicemembers.

As rewarding as it was, Neely said, he is glad to be home and was surprised by the welcome he received at Yokota.