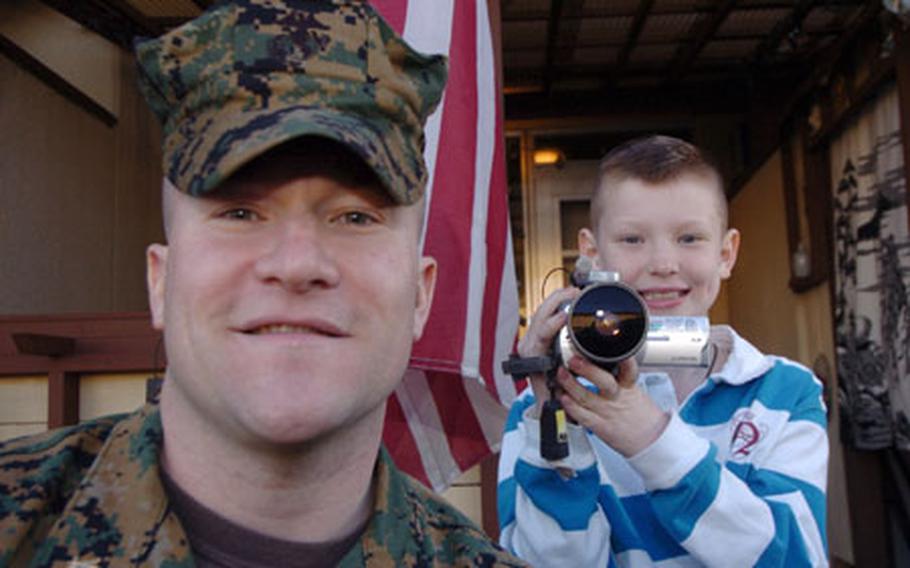 Marine Maj. Neil Murphy and his 9-year-old son, Jake, are seen recently outside their home at Yokota Air Base, Japan. Jake is among 20 kids who will be featured in a reality series called "My Life As a Child" on The Learning Channel. The program debuts Feb. 26 in the United States. The episode featuring Jake is due to air March 12. (Christopher B. Stoltz / S&S)

YOKOTA AIR BASE, Japan &#8212; Nine-year-old Jake Murphy says he&#8217;d like to play baseball or football when he grows up. He might even follow in his father&#8217;s footsteps and become a Marine.

Reality TV star was never part of the plan.

But the Yokota West Elementary School fourth-grader might be headed that way with the upcoming premier of &#8220;My Life as a Child&#8221; on The Learning Channel. The program was to debut Monday in the United States and his episode airs March 12.

Arrangements are being made to show his installment on the American Forces Network sometime this spring but no date has been announced.

Last February, TLC asked children ages 7-12 to submit videos about their lives, according to a TLC news release. More than 400 responded, and 20 were selected for the documentary series.

Each child had to be producer, cameraperson and director of his or her segment, taping themselves for about four months each and capturing footage that ultimately formed the six-episode series.

Murphy was picked to represent kids of military personnel &#8212; and all the wonders and tribulations they face. He&#8217;s certainly qualified. Born on Camp Lester, Okinawa, he&#8217;s moved seven times in nine years, his parents said.

Marine Maj. Neil Murphy, the deputy public affairs director for U.S. Forces Japan, said an e-mail was sent through the Defense Department last year soliciting military children interested in participating in a TLC project. He decided to get the application started.

After determining Jake would be a good candidate, TLC furnished him a camera and he began putting together video diaries. He chronicled the family&#8217;s move from Camp Lejeune, N.C., to Yokota last July.

The footage is shot entirely through his eyes and he provides all narration.

The boy filmed everything from his baseball games and soccer practices back in the U.S. to eating raw fish and squid heads in Tokyo. He captured the family getting on the plane, arriving at an empty house in Japan and their first trip to Mount Fuji.

In January, TLC flew Neil and Jake Murphy to New York for three days to film promos, conduct interviews and meet the other children selected for the show. All hail from a mixture of backgrounds.

In each one-hour episode, the kids give their unfiltered views on parents, peers and growing up.

Jake&#8217;s episode, titled &#8220;American Dream,&#8221; also will highlight two other children: Tina, 10, of New Orleans, whose family lost everything on the first floor of their home to Hurricane Katrina; and 11-year-old Elif, a Muslim who recently moved to America from Turkey.

For his part, Jake Murphy says he likes being a military kid.