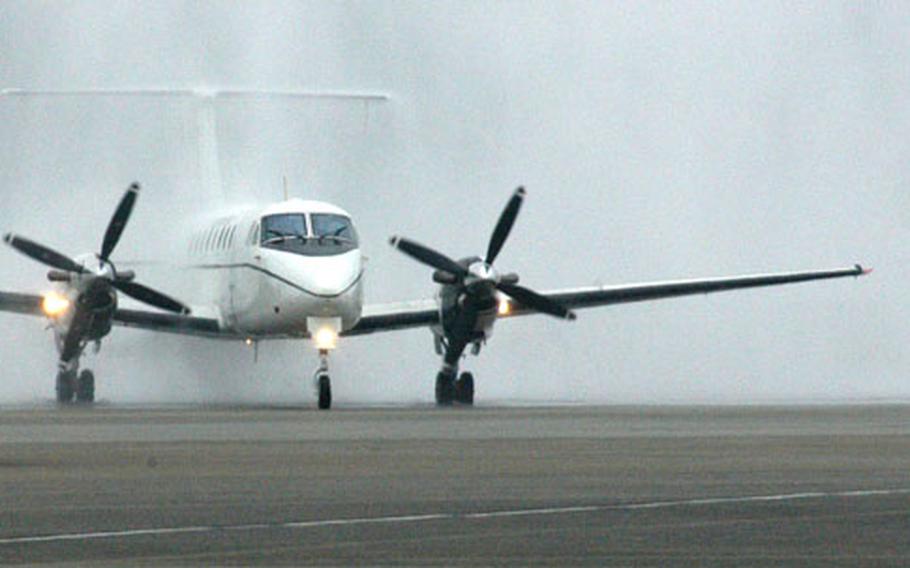 One of the three C-12 planes that are scheduled to replace the C-21s, drives through a arch of water being sprayed from firetrucks as it is welcomed to Yokota Air Base. (Bryce S. Dubee / S&S)

One of the three C-12 planes that are scheduled to replace the C-21s, drives through a arch of water being sprayed from firetrucks as it is welcomed to Yokota Air Base. (Bryce S. Dubee / S&S) 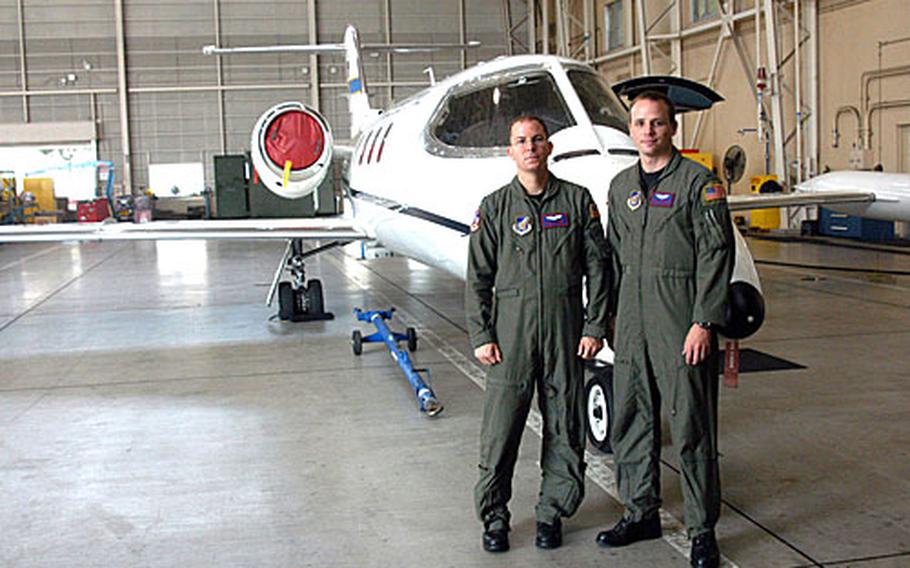 YOKOTA AIR BASE, Japan &#8212; The last of the C-21 transport planes assigned to Yokota&#8217;s 459th Airlift Squadron departed the base in a ceremony on Friday, part of the Air Force&#8217;s transformation goal of reducing personnel and saving money.

The C-21s, the military version of the Lear Jet 35A business jet, have been assigned to Yokota since January 15, 1985.

They were used to transport senior personnel and cargo and to conduct aeromedical evacuations.

They will be replaced by the C-12, a twin turboprop aircraft, the second of which arrived from Osan Air Base, South Korea, on Friday.

He will return to Yokota after learning how to fly the C-12.

Even though the C-21 has a longer range and is faster than the C-12, Maughan explained the squadron will still carry out the same mission.

&#8220;Some of the operating procedures will change, but we will still be able to go to all the locations that we did before, including a few new ones because of the C-12&#8217;s capability to land on shorter runways,&#8221; he said.

Another benefit of the new planes is that they can carry more than twice as many passengers as the eight-passenger jet, said Lt. Col. Thad Hunkins, the 459th Airlift Squadron commander.

Hunkins said the number of personnel in the squadron would stay about the same, as three C-12 pilots from the 55th Airlift Squadron from Osan will merge with the 459th.

He also noted the seamless transition of the new planes and pilots has kept the unit mission capable during the swap.

Three C-12s, two from Osan and one from Elmendorf Air Force Base, Alaska, will replace the four C-21s.

Two already have been delivered to Yokota, while the third is being retrofitted and is scheduled to arrive in October.