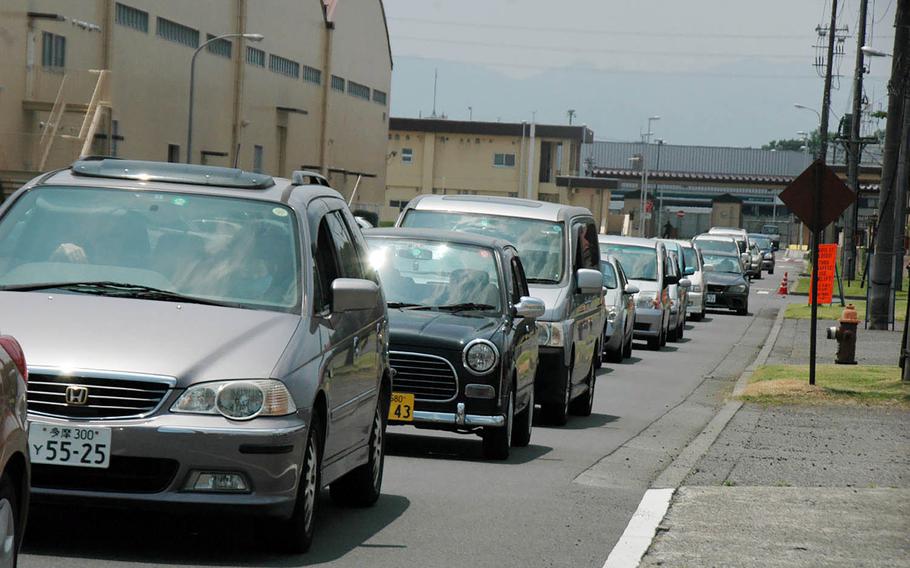 Buy Photo
Drivers wait to cross the active runway at Yokota Air Base, Japan, in 2016. Lights control ground traffic crossing the runway, where, at any given time, one of the 374th Airlift Wing's C-130J Super Hercules transports might be landing or taking off. (Seth Robson/Stars and Stripes) 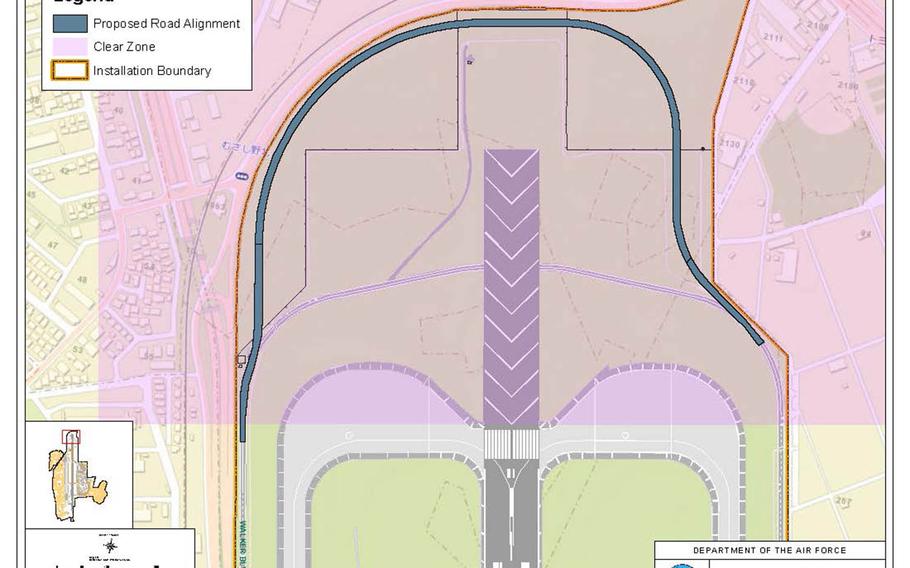 This map shows the proposed path of a road extension that will allow drivers to cross Yokota Air Base, Japan, without stopping for aircraft. (Courtesy of the U.S. Air Force)

YOKOTA AIR BASE, Japan — A $5.2 million road construction project at the home of U.S. Forces Japan will eventually allow motorists to drive across the base without giving way to aircraft, Air Force officials said.

The project, which kicked off Monday and is expected to last at least 18 months, will extend a road that allows commuters to drive nonstop around the north end of Yokota’s runway, 374th Civil Engineer Squadron portfolio optimization chief George Matusak said in a report posted on the base’s official website.

Existing roads go directly across the runway’s north and south ends, meaning motorists must wait at traffic lights when aircraft are taking off or landing.

A map of the planned Air Force-funded three-quarter-mile extension shows that it will follow an existing pedestrian and cycle path on the base’s north side.

Motorists will be about 400 feet from Yokota’s overrun and 1,200 feet from its runway when using the new road, Matusak said in an email Wednesday.

“Typically, the road should be [farther away from the runway] however this is impossible at Yokota AB due to the constrained space of the base perimeter,” he said. “However, the road is far enough away to not interfere with any flying operations or impact safety.”

The extension will be depressed to keep vehicles from obstructing runway centerline lights, Matusak added.

During construction, the road that now crosses the runway’s north end will be closed for at least 18 months, he said.

“With that in mind, we wanted to make sure the south [overrun] is in good shape because all traffic is now moving to the south end,” he said. “So, we are doing a quick overlay of the south end to prepare.”

From Jan. 21 to April 12, both overruns will be under construction in alternating schedules, the base report said.

“At no point will both overruns be closed at the same time, so commuters will not have to exit base and re-enter on the side of their destination,” Matusak said. “Because the south overrun sees significantly more traffic, it will remain open during the day, only closing at night to limit inconvenience as much as possible.”

After April 12, the south overrun is scheduled to be fully operational and the north overrun will remain on night hours until July 1, after which it will fully close until work is completed, the base report said.

Commuters should prepare for increased travel times due to traffic and construction equipment, Eddie Bagtas, 374th CES project management chief, said in the base report.

“Progress is always painful, but this is all for the benefit of the population,” he said. “We ask for patience and understanding along the way.”

Master Sgt. Chris Mace, an Air Force maintainer who has lived in Yokota’s east-side housing area since 2015, said Tuesday he’d heard about the road plan but didn’t think it would happen while he was in Japan.

“We’re here for the mission and I definitely understand that … [but delays crossing the runway] have made me late for appointments and picking up the kids from school,” he said.

On-base traffic jams happen when there are mechanical issues with aircraft on the runway, Mace said.

For example, there was a 90-minute delay after a C-130 Hercules blew tires out and an hourlong wait after a KC-135 Stratotanker had problems with its landing gear, he said when recalling incidents from the past few years.