Yokota barber is a base institution 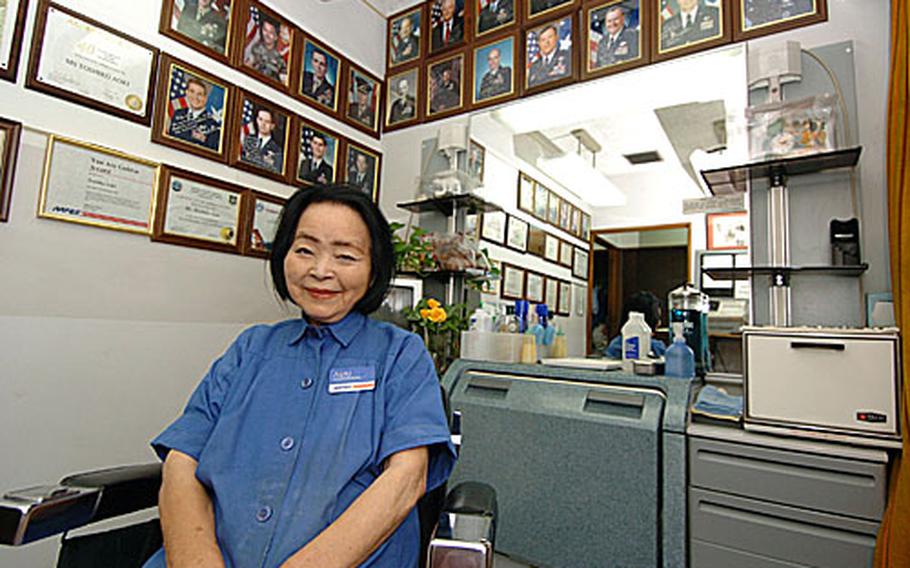 Toshiko Aoki has been at Yokota Air Base, Japan, since 1970 and worked as an AAFES barber for 56 years. Her tiny shop at the Yokota Officers&#39; Club is adorned with numerous letters and certificates of appreciation, as well as framed photos of past commanders who have served at the base over the years. Among the notable: Gens. Richard Myers and Peter Pace, the former and present chairman of the Joint Chiefs of Staff. (Christopher B. Stoltz / S&S)

YOKOTA AIR BASE, Japan &#8212; Toshiko Aoki never gave Gen. Douglas MacArthur a haircut. But it wouldn&#8217;t have come as a shock to many people at Yokota if she did.

One step inside her tiny barbershop at the Yokota Officers&#8217; Club pretty much illustrates why.

The walls are adorned with letters, certificates of appreciation and more than two dozen framed photos of generals, colonels and other military officials who&#8217;ve passed through over almost six decades. Among the notable: Gens. Richard Myers and Peter Pace, a former U.S. Forces Japan commander and his assistant, and the last two men to occupy the chair of the Joint Chiefs of Staff.

Each photo is inscribed with warm wishes for a woman who began cutting hair for the Army and Air Force Exchange Service 56 years ago.

After World War II, she and her two younger sisters opened a barbershop on their native island of Kyushu. An Army master sergeant from nearby Camp Woods became a regular and liked her work so much he started bringing her to the base once a week.

Nine years later, she took a job on the mainland at the old Tachikawa Air Base, where customers were charged 35 cents and typically tipped a quarter.

Aoki came to Yokota in April 1970, working first at the Military Airlift Command terminal&#8217;s barbershop, then for the one at the Officers&#8217; Club.

The old facility had seven chairs, she said. When it moved to the current building in the mid-1970s, seating was reduced to three in a separate part of the club.

After her mother&#8217;s death a few years later, management shifted her into the small shop she now occupies and informed her she&#8217;d be a one-person operation. A single chair sits in a room no larger than a walk-in closet.

At first, Aoki said, she was reluctant to continue.

AAFES and the base commander at the time persuaded her to stay, she said.

Today, her chair is secured by reservation only and a haircut is $10.25. The Japanese government, however, pays $4 of that tab to offset the weak dollar.

Enlisted troops are welcome but most clients are officers. Aoki hands out candy to all &#8212; and brandishes a melting smile. But she&#8217;s also lived long enough to experience the hardships of war.

When she was a girl living in Kyushu, she remembers, U.S. B-29 bombing raids forced her family to seek refuge in the mountains. Even there, she recalls, they felt the heat from the distant firebombs, then saw their hometown &#8220;burned out&#8221; about two weeks before the war ended.

Despite lingering animosities from the war, she said, she never harbored ill feelings toward Americans or vice versa.

A civilian educator, who worked at Tachikawa and Yokota until his retirement a few years ago, used to bring her pumpkin pies every Thanksgiving.

When Aoki worked at Tachikawa in the 1960s, she was among several barbers called on to give haircuts to wounded soldiers on their way home from Vietnam. The troops often would be bandaged, with bloodstains on their bodies and faces.

But not the wounded soldiers.

The diminutive barber, who stands barely 5 feet tall, won&#8217;t reveal her age but said she&#8217;s well past when most people retire.

Aoki never missed a day due to illness, she said. She took a week off each time to attend the funerals of her mother and two sisters but never has had a vacation.

Barring any health problems, Aoki said, retirement isn&#8217;t in her future, mostly because of finances. She gets social security from the Japanese government but it&#8217;s too little to cover her house payment in nearby Fussa.