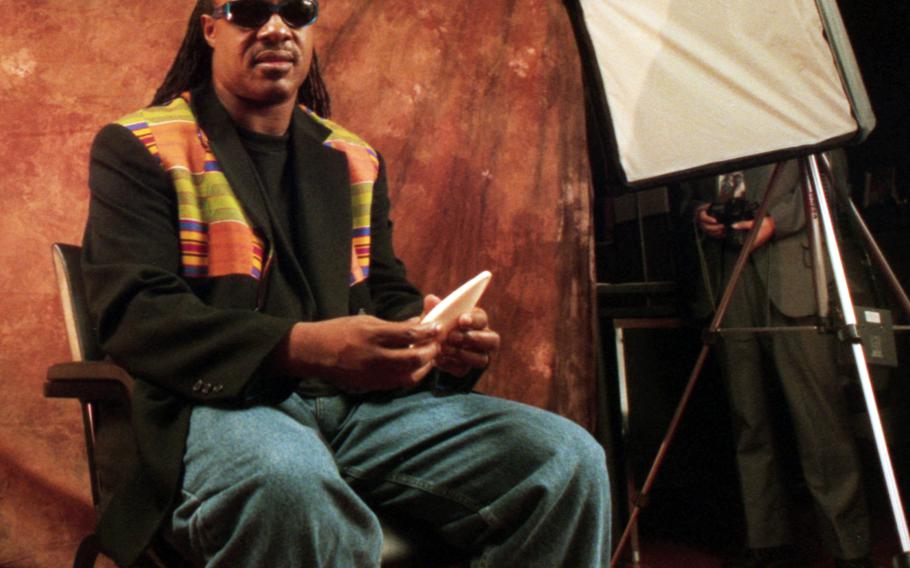 Stevie Wonder poses for a photo at Yokota Air Base, Japan, in September, 1996. (Stars and Stripes)

YOKOTA AIR BASE — Outside Yokota Air Base's Hangar 15, much of what wasn't nailed down was being made airborne by Typhoon Violet on Sept. 21.

And inside the hangar, pop legend Stevie Wonder was doing the same thing to a zealous audience of some 2,500 fans who attended his one-night show at the base, 30 miles west of Tokyo.

The faithful jumped and shouted as the superstar took center stage, and then Wonder transported them to the 1970s and back again during his 2½-hour, nonstop concert. His band didn't miss a beat while following Wonder's rapid pace and spontaneity.

"Servicemen and women here are fighting to keep our homes safe and preserve democracy, so I just wanted to come and say I love them for it," Wonder said in an interview before the show, explaining why he added the air base to his Japan tour.

This is not the 46-year-old's first performance at a military site. He sang at West Point about 15 years ago.

"I'd like to tour all the military bases throughout the world. I think that would be great," Wonder said.

If the concert went well, the blind singer/composer joked, maybe the base commander would let him fly a plane. He would only do a few tricks with it and then land, he said.

Bursting on the pop music scene in 1963 at age 13 as Little Stevie Wonder, the Saginaw, Mich., native's music has often carried a social message.

Asked about the origin of "My Love Is With You," a lesser-known song in his repertoire performed at Yokota, Wonder said it was inspired by the murders of two friends, Jeffrey James and Lori Miles, in separate carjackings.

"The song is actually a love song. The lyrics are meant to speak to America's youth," he said. "The song addresses respect for your fellow man and stopping senseless street violence."

Wonder hopes the song will prompt support for his plea to ban handguns in America. He said the federal government should establish at least a better way to control handgun purchases.

If given the whole world as a captive audience, Wonder said, "I would tell the world that they should all learn to develop a greater respect for themselves and the cultures that surround them. It's been said that it takes more than a parent to raise a child, it takes an entire village, and I believe that."

Wonder said being born blind was never a condition that afforded him special treatment at home.

"I got beatings just like my brothers and sister. ... I mean beat down. It's going to be a beat-down tonight. 'Stevie did it, Mom,' my brother would say," Wonder said.

"When I was a child I did almost all the same things that other kids did. I just had to figure out a different way of doing it," he said. "We used to climb on top of this wood shed and jump off. The trick was to outjump everyone else. But on this one occasion when I was jumping, my younger brother Larry yelled out that our mother was coming, but I didn't hear him. I jumped and landed right in my mother's arms. I think I remember her waiting until we got home before she beat me."

His family always treated him like a normal child, Wonder said, and that later gave him the courage to pursue a singing career.

"I know that when you're visually impaired you can't do everything, but my thoughts were that at least I was able to try," he said.

Oblivious at first to his mother's worries, he ventured a few blocks away from home when he was about 11, following the sounds of music. Strangers helped him cross the streets. Eventually he came upon a few musicians playing on the curb.

"I had my bongos and joined in. It was there that I met Ronnie White, of Smokey Robinson's group, the Miracles. He heard me singing and said he had to let a friend of his hear me," Wonder said. "He arranged for me to meet Berry Gordy, the founder of Motown Records."

The most Wonder expected from the meeting with Gordy was a coveted encounter with a variety of musical instruments in the Motown studio, and perhaps a spanking from his mother for getting home late. "I never imagined that it would amount to all this," he said.

A cluster of Grammy Awards later, Wonder is still with the Motown label, and recently signed a lifetime contract.

His tendency to take risks continued when he became an adult, but the risks now have a much more far-reaching impact than does jumping off a roof.

"One risk I felt was worth was when I told Coretta Scott King that I thought her husband's birthday, Dr. Martin Luther King Jr., should be recognized as a national holiday," Wonder said.

That dream became a reality in 1984 when President Reagan announced the establishment of Martin Luther King Jr. Day.

Wonder's first hit record was "Fingertips Part 2" in 1963, recorded at a concert at the Regal Theater in Chicago.

"The original key for 'Fingertips' was G, and when I did it on the live performances, we did it in the key of C," he said, adding that it sometimes sparked confusion, with the band shouting, "What key? What key?"

The song also was too long for the conventional three-minute format of that era, so producers cut it in half and marketed the second part, the reason it is called "Part 2."

By the 1970s, having made the transition from Little Stevie Wonder the child star to Stevie Wonder the adult superstar, he began to show his true musical depth. At 21, Wonder rejected his previous recording agreements and negotiated for himself the freedom to become a musical pioneer. The albums he recorded in the 1970s, particularly "Talking Book," "Innervisions," "Fulfillingness First Finale" and "Songs In The Key Of Life" became defining hallmarks of 1970s musical trends.

Asked about his own listening preferences, Wonder said that a visitor who pushes the play button on his home stereo would hear Toni Braxton's voice.

"I listen to all kinds of music, from jazz to country. I don't understand how artists expect to have a broad spectrum of musical understanding without listening to other singers," he said.

About other artists' renditions of his songs, Wonder said, "The people that have performed my music are truly a compliment to me. If I had to choose a single person to record some of my songs, it would be difficult. I feel if someone thinks they can do my stuff, have at it. Although I do like Garth Brooks' musical style."