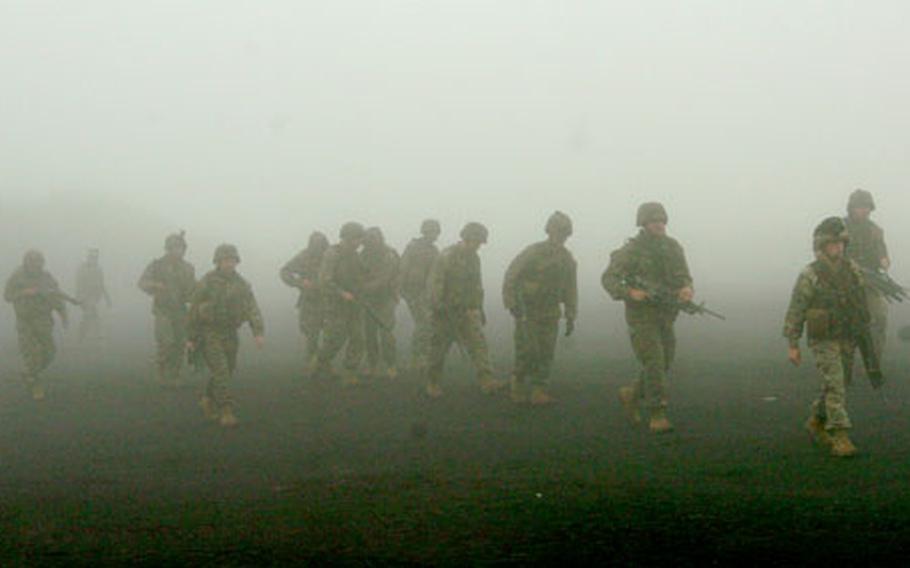 Marines walk to their training positions Saturday morning under a layer of fog at Camp Fuji, Japan. They’re training airmen from Yokota Air Base for an upcoming transport mission in Iraq. (Christopher B. Stoltz / S&S)

Marines walk to their training positions Saturday morning under a layer of fog at Camp Fuji, Japan. They’re training airmen from Yokota Air Base for an upcoming transport mission in Iraq. (Christopher B. Stoltz / S&S) 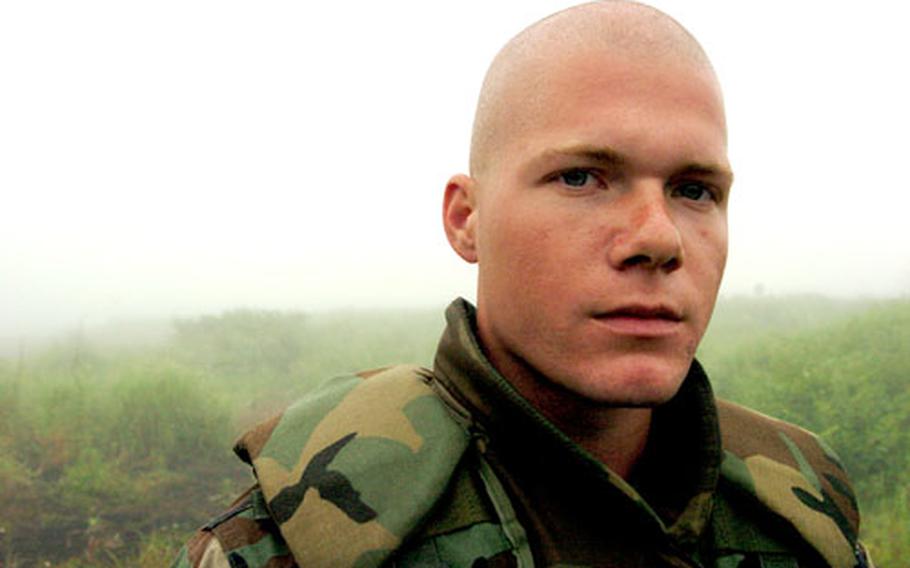 Airman Jason Borowiee, training in fog and damp Saturday morning, said, “I’m ready to go. It’s a once-in-a-lifetime opportunity and this will be the first time doing this assignment.” (Christopher B. Stoltz / S&S) 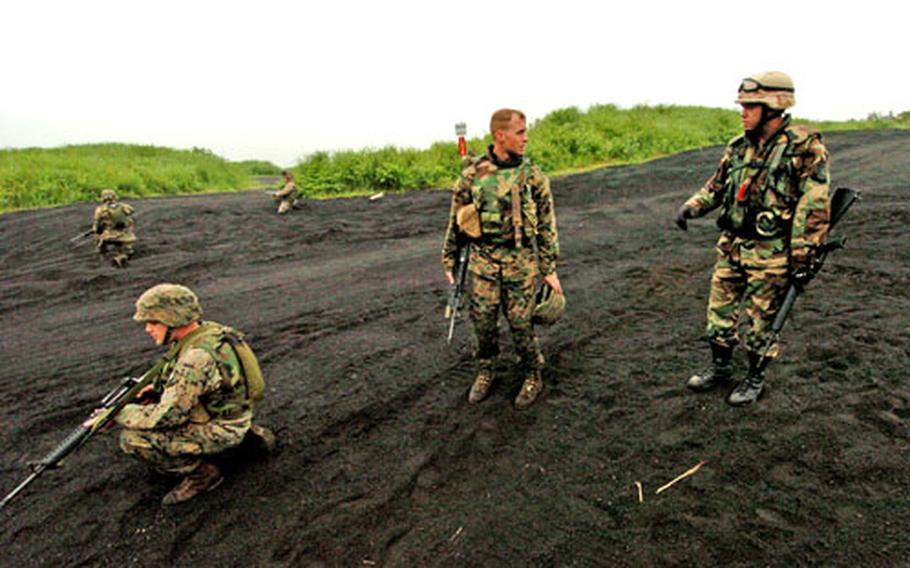 Marines from Battalion Landing Team 24 instruct airmen from Yokota Air Base, Japan, on how to do flanking procedures. (Christopher B. Stoltz / S&S)

Yokota Air Base vehicle operators hit the mountain ranges of Camp Fuji, Japan, last week for live-fire and basic defensive convoy training ahead of a deployment this summer to Iraq, where they&#8217;ll link up with Army units as part of an Aerospace Expeditionary Force rotation.

The six-day rehearsal, to end Monday, focused on how to spot the enemy, what to do if a large convoy is attacked, medical evacuation and other procedures associated with transport missions in a hostile environment. Eight airmen from the 374th Logistics Readiness Squadron took part.

As the Japanese mainland&#8217;s largest maneuver training area, Camp Fuji occasionally is used by other military branches prior to major troop dispatches.

&#8220;Yokota airmen continue to be tasked by the Air Force to conduct convoy operations in Iraq with the Army,&#8221; said Chief Master Sgt. Carl Hunsinger, the squadron&#8217;s chief enlisted manager. &#8220;The reason we attend training at Camp Fuji is to receive heavy weapons training with live fire.&#8221; The Yokota airmen also &#8220;receive basic procedures used to defend convoys,&#8221; he said.

Advanced training awaits at Camp Anderson-Peters, Texas, where the drivers will go through the Basic Combat Convoy Course with a 160-member team. The new facility there is named for two airmen killed in Bayji, Iraq, while providing convoy security .

The entire contingent faces additional exercises with the Army in Kuwait before moving north into Iraq, Hunsinger said.

Combat convoy missions were tacked on to the Air Force&#8217;s Vehicle Operations career field in February 2004. Yokota at once provided airmen to support Army efforts throughout Iraq, Dulin said.

Since then, two Air Force vehicle operators have been killed and more than 50 wounded. Hunsinger said 52 Purple Hearts have been awarded, one airman awaits a Silver Star and more than 70 earned Bronze Stars, some with valor.

&#8220;Ours could possibly be the highest-decorated career field in recent history,&#8221; he added.

Hunsinger said the training &#8212; which constantly evolves based on lessons learned in Iraq &#8212; has paid dividends and saved lives.

&#8220;The objective is to prepare our airmen with the best tools possible before we put them out front facing the enemy,&#8221; he added.

&#8220;Nobody likes to constantly eat [meals, ready to eat] and run around in the rain&#8221; but &#8220;the airmen truly appreciate the extensive training, which they understand can mean the difference between living or dying.&#8221;

Chris Stoltz contributed to this report.