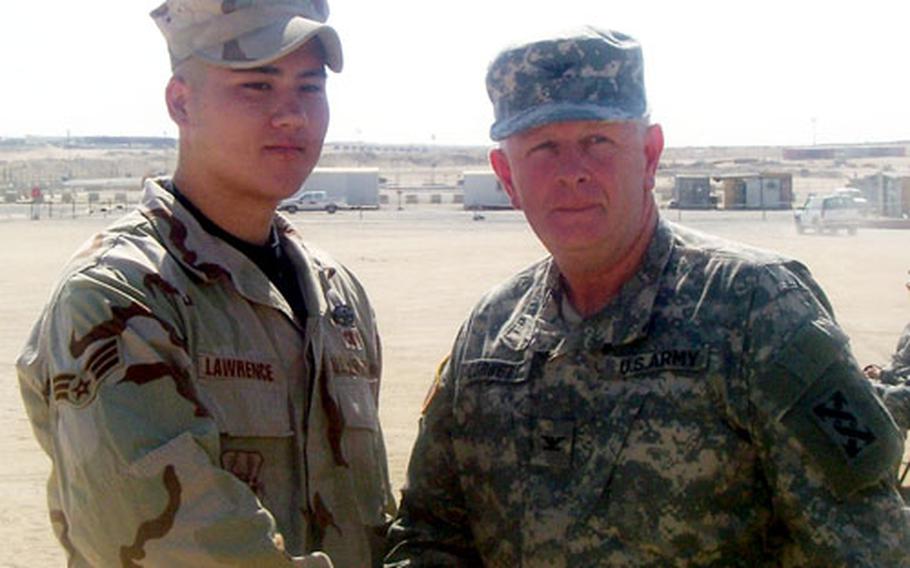 Senior Airman Michael Lawrence shakes hands with an Army colonel after receiving the Army Combat Action Badge for his actions on a convoy in Iraq. (U.S. Air Force)

YOKOTA AIR BASE, Japan &#8212; A group of airmen and soldiers entered a chow hall at an air base in Iraq, just coming off a long convoy from Kuwait. Dusty and tired, with weapons slung on their shoulders, they all sat down together, talking loudly with each other while they ate.

While the strangers ate, other airmen stationed at the base looked questioningly at each other. Who were these guys?

The airmen in question were part of the 424th Medium Truck Detachment, the &#8220;Centurions.&#8221; Based out of Camp Arifjan, Kuwait, the 424th was an Air Force detachment that worked with the Army, driving convoys to deliver much-needed supplies to bases throughout Iraq.

Unlike many other airmen deployed to Southwest Asia for usually about 120 days, 424th members were mobilized from various Air Force units and deployed for nine months.

With the unit logging more than 1.9 million miles over the course of 242 missions, Wilbur said, working on such a demanding mission brought everyone together like family.

When the airmen first arrived in Kuwait, there was a feeling of having to prove themselves to the soldiers, said Lawrence, who has done three tours in Iraq.

But after a while, the airmen said, they were showing the ropes to newly arrived Army units.

Driving to almost every base in Iraq, all three airmen inevitably saw combat.

While Lawrence was driving the lead Humvee on one convoy, his vehicle was hit by an improvised explosive device. Using his training, he led the convoy out of the kill zone and performed first aid on his truck commander, enabling the convoy eventually to continue the mission. &#8220;It just happened all at once and everything went like clockwork,&#8221; he said.

The training that took place in Japan, the United States and Kuwait, the airmen said, paid off once they got on the road in Iraq &#8212; especially combat lifesaving and the Basic Combat Convoy Course.

Wilbur acknowledged the fear she felt crossing the border for the first time from Kuwait into Iraq, not knowing what to expect on the now-infamous Iraqi highways. After a while, as she started to figure things out, her confidence on the road grew, she said, but she still had some fear &#8212; which kept her alert to potential dangers. &#8220;You have to have some fear,&#8221; she said. &#8220;If not, something is wrong.&#8221;

With their Iraq mission over, the airmen will return to their jobs in the 374th Logistic Readiness Squadron.