Yokota airmen, Japanese troops simulate fending off attack on base 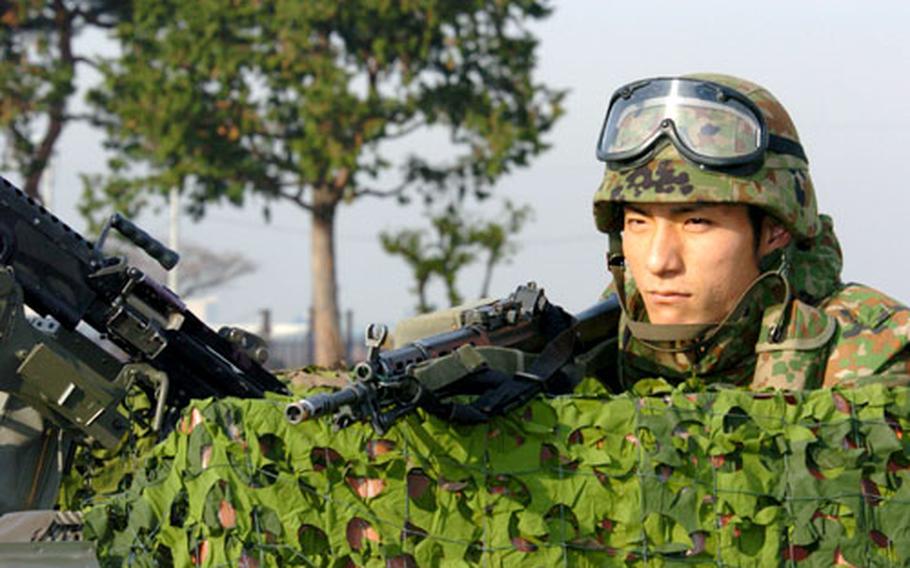 A soldier from the Japanese Ground Self-Defense Force mans his machine gun during the joint Guard and Protect exercise Tuesday with airmen at Yokota Air Base. The exercise was to simulate protecting the installation from an enemy attack. (Jim Schulz / S&S)

A soldier from the Japanese Ground Self-Defense Force mans his machine gun during the joint Guard and Protect exercise Tuesday with airmen at Yokota Air Base. The exercise was to simulate protecting the installation from an enemy attack. (Jim Schulz / S&S) 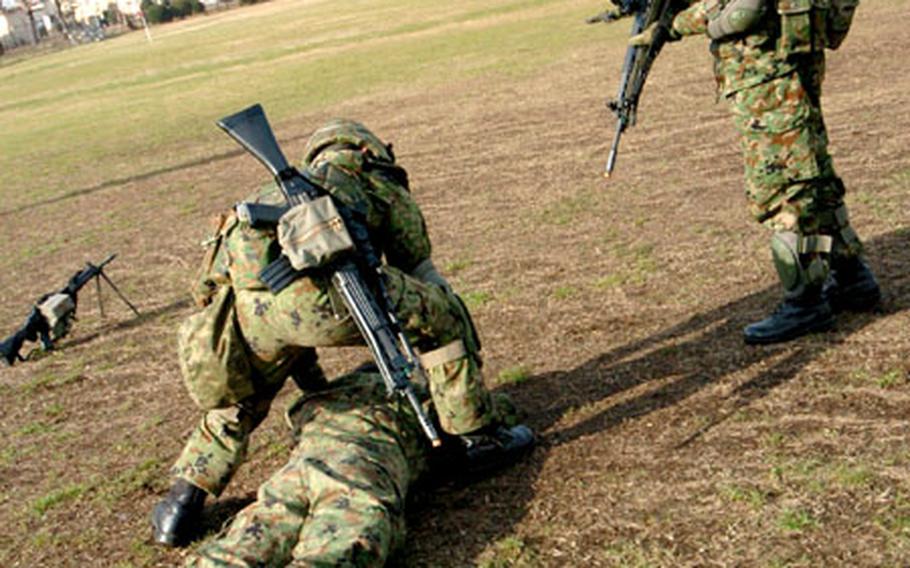 Soldiers from the Japanese Ground Self-Defense Force check an “enemy” during an exercise at Yokota Air Base. Japan’s Self-Defense Law calls for the JGSDF to protect U.S. military facilities during contingency operations. The innaugural Guard and Protect exercise was deemed a success. (Jim Schulz / S&S)

YOKOTA AIR BASE, Japan &#8212; Yokota security forces personnel and the Japan Ground Self-Defense Force on Thursday closed out &#8220;Guard and Protect,&#8221; a four-day joint exercise that tested their ability to defend the installation from attack by terrorists or a foreign nation.

The session, which began Monday, included about 200 members of the JGSDF&#8217;s 1st Division and 80 airmen from the 374th Security Forces Squadron. It was the fifth installment in the ongoing series of force-protection drills designed to support Japan&#8217;s Self-Defense Law.

The measure, revised in October 2001, makes the JGSDF responsible for protecting U.S. military facilities during contingency operations. Among the bases covered under the law are Yokota, Misawa Air Base, Camp Zama, Yokosuka Naval Base, Atsugi Naval Air Facility, Sasebo Naval Base and Iwakuni Marine Corps Air Station, which staged a similar exercise last week as part of Active Shield.

&#8220;It&#8217;s the first time we&#8217;ve conducted this drill,&#8221; said 1st Lt. Warren Comer, a 374th Airlift Wing spokesman. &#8220;We are hoping this exercise is scheduled yearly so that we may practice communication and execution with the JGSDF, thus improving our techniques.

&#8220;The Guard and Protect exercise gives members of the Japanese Ground Self-Defense Forces from the 1st Division and 374th Security Forces Squadron an opportunity to test both units&#8217; ability to defend Yokota Air Base from attack by a foreign nation. The JGSDF would augment Yokota&#8217;s forces should offensive action be undertaken by a foreign country against Japan and the U.S. government.&#8221;

Within the exercise&#8217;s scenarios, participants rehearsed incident response while keeping Yokota operational for the receipt of additional supplies, military personnel and equipment that would aid in Japan&#8217;s defense.

A significant portion of Guard and Protect unfolded on the base&#8217;s northern side, which borders Mizuho Town. Most operations were held during daytime hours, Comer said, in an effort to reduce the noise impact on surrounding communities.

Inside the gates, sharpening communication between the U.S. and Japanese forces was a primary exercise objective, Comer said, aimed at fostering greater cooperation during a real-world crisis.

&#8220;We wanted to better understand the varying tactics and strategies employed by the JGSDF and our security forces,&#8221; he added. &#8220;Our hope is that both will learn more about each other. We&#8217;re taking this opportunity to see how each group solves problems and communicates them to their leaders.

&#8220;This will allow us to better prepare a more cooperative plan and ensure that communication is understood at all levels. In doing this, both forces ensure success if any future conflict arises.&#8221;

Neither side encountered a major problem during the inaugural joint exercise, he said. Yokota officials labeled the debut a success.

&#8220;The U.S. and Japan have had an outstanding relationship for decades,&#8221; Comer said. &#8220;This exercise is a continuation of that cooperation, helping us face possible future threats in the mutual defense of Japan.&#8221;