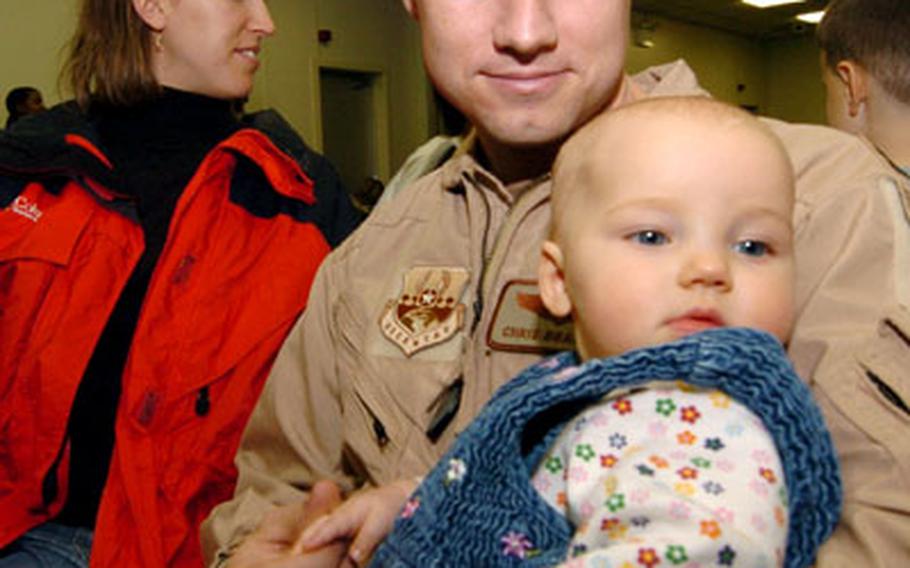 Capt. Chris Bragdon enjoys time with his wife, Sarah, and their 7-month-old daughter, Julia, before he ships off for a four-month temporary duty assignment. (Christopher B. Stoltz / S&S)

Capt. Chris Bragdon enjoys time with his wife, Sarah, and their 7-month-old daughter, Julia, before he ships off for a four-month temporary duty assignment. (Christopher B. Stoltz / S&S) Staff Sgts. Jason Collins, Tyler Weisgran and Aaron Pina and Airman 1st Class Matthew Woodham play dominos Thursday as they wait in a terminal on Yokota Air Base, Japan, to ship off for a four-month temporary duty assignment. “We have dominos, cards and the rest of the essentials to pass the time,” Pina said. (Christopher B. Stoltz / S&S) 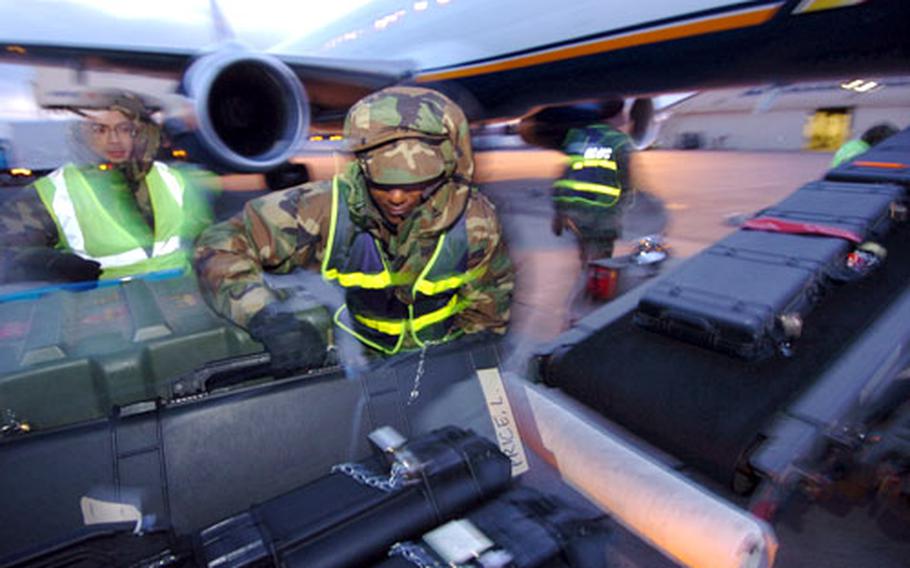 Airmen waiting in a terminal on Yokota Air Base watch movies and play games Thursday while they wait to ship off. (Christopher B. Stoltz / S&S)

YOKOTA AIR BASE, Japan &#8212; Almost 150 airmen from the 374th Airlift Wing are leaving this week for Southwest Asia to support Operation Iraqi Freedom and Operation Enduring Freedom in the war on terror.

It&#8217;s part of a scheduled rotation within the Air Force&#8217;s Aerospace Expeditionary Force cycle. The dispatch represents more than half of Yokota&#8217;s 268-troop commitment in AEF 9 and 10, being carried out in waves through April. Fifty personnel left Tuesday for Central Command&#8217;s area of responsibility; another 50 are to deploy this weekend.

About 40 airmen joined family, friends and co-workers Thursday for a quiet send-off in a building next to Yokota&#8217;s flight line.

Yokota&#8217;s contingent is expected to be gone for about four months, he added.

Before boarding a charter plane Thursday night, airmen passed time by watching movies and playing cards. In between, they grabbed refreshments and munched on pizza brought in from Anthony&#8217;s.

Senior Airman Kevin McHenry of the 374th Civil Engineer Squadron, who&#8217;s headed to Kandahar Air Base in Afghanistan on his first deployment, said he&#8217;s not too worried about what awaits.

McHenry has tried to dispel the fears of his wife, Jerri, pregnant with the couple&#8217;s first child.

The two work in vehicle maintenance and will fix Humvees during the deployment at Bagram Air Base, Afghanistan.