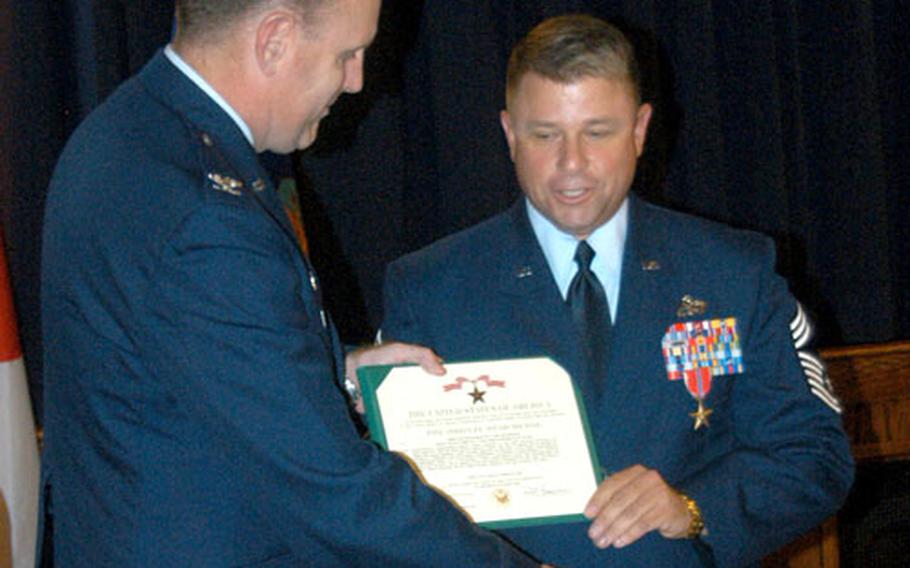 In February 2004, the Air Force provided a personnel injection that redefined the career field and lifted U.S. efforts throughout the theater. Since then, more than 50 airmen have received Purple Hearts, one awaits a Silver Star, and at least 70 earned Bronze Stars.

Col. Scott Goodwin, 374th Airlift Wing commander, made the presentation in a brief ceremony at the Yokota Enlisted Club.

&#8220;We&#8217;re here to recognize outstanding performance in ground combat operations,&#8221; he said. &#8220;Two years ago, this would&#8217;ve been unheard of in the Air Force. Today, the single most important and dangerous mission our airmen are conducting is combat convoy operations in Iraq. &#8230; One of those right in the thick of the fight was Chief Hunsinger.&#8221;

Hunsinger, now 374th Mission Support Group superintendent, guided 160 airmen within the company and worked with 950 soldiers as the battalion&#8217;s acting command sergeant major. Officials credit his leadership for the safe passage of 505 convoy runs, which moved more than 957,000 freight tons of cargo and 800 passengers over 2.9 million miles throughout northern Iraq.

A roadside bomb early in Hunsinger&#8217;s deployment killed an airman first class from a 20-member crew out of Elmendorf Air Force Base, Alaska.

&#8220;Keeping the troops together after losing our airman was difficult,&#8221; he recalled. &#8220;When you lose one of your own, it&#8217;s like losing a family member. You have to let them recover and get them ready to do the mission. It took a lot of counseling.

According to the Bronze Star citation, Hunsinger voluntarily assessed the perimeter defenses of Logistics Support Area Diamondback in Mosul, documenting vulnerabilities and suggesting improvements. He hardened vehicles by arranging for full armor on truck cabs and gun boxes.

His training methods compelled airmen to sharpen wartime skills, the citation said, and he devised standardized documentation for those performing duties outside their normal specialties. He also arranged for an $886,000 shipment of night-vision and infrared equipment.

Hunsinger said Air Force convoy specialists are proving themselves at every level &#8212; including special operations &#8212; and have integrated successfully with the Army to tackle the overall mission in Iraq.