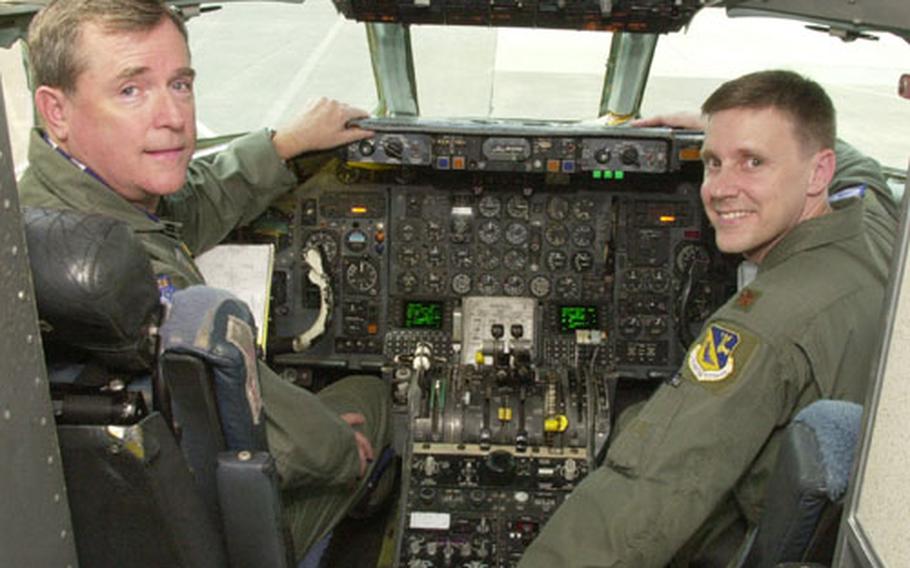 Gen. Thomas Waskow, left, and Maj. Scott Schaeffer smile from the cockpit of a C-9 prior to the general&#39;s flight. The Air Force will retire the C-9 Sept. 12th in the Pacific and replace it with the KC-135 for transporting MEDIVAC patients. (Jim Schulz / S&S)

YOKOTA AIR BASE, Japan &#8212; Pilots, maintainers, flight nurses and aeromedical technicians here are quietly bidding farewell to a plane that has a long and storied history in the Pacific theater.

The vintage C-9A Nightingale has flown over Pacific waters since 1972, when the birds were first assigned to Clark Air Base, Philippines. In 1989, three of the modified Boeing DC-9s were transferred to Yokota Air Base and a fourth was later added, according to Pacific Air Forces officials.

The Air Force announced in July that it would retire its fleet of 20 C-9As, including four assigned to Yokota.

For the pilots and aeromedical crews who made numerous jaunts to pick up, transport and care for critically ill patients, there are countless memorable missions.

Many involve saving a life.

1st Lt. Matt Astroth, a pilot, remembers the 10-year-old boy from Vietnam, diagnosed with Severe Acute Respiratory Syndrome, who was shuttled via C-9 to a Taiwan hospital. Then, there was the shark-bite victim from Johnston Island, a tiny atoll 800 miles southwest of Hawaii.

Tech. Sgt. Kevin Murphy, the noncommissioned officer-in- charge of the 374th Aeromedical Evacuation Squadron&#8217;s standards and evaluations, recalls a few unforgettable missions, from evacuating typhoon victims to airlifting a bomb victim out of the Philippines.

The C-9 has covered a lot of ground in the Pacific, from the North Pole to the South and from the West Coast of the United States to eastern Saudi Arabia. In 2002, the birds transported nearly 5,000 patients throughout the Pacific, according to Yokota officials.

The 374th Aeromedical Evacuation Squadron will continue in-flight patient care after the C-9 retires, just on different airframes. The Air Force has designated the KC-135 refueling tanker and C-130 Hercules cargo plane as interim solutions to replacing the C-9 in the Pacific theater, though other aircraft will be used as needed.

After a C-9 retirement ceremony on Friday, the squadron will be deactivated in a Sept. 25 ceremony at Yokota and reactivated Sept. 26 at Kadena Air Base as the 18th Aeromedical Evacuation Squadron. The number of personnel will decrease from about 106 to 87 people, operating out of three locations: Kadena, an unnamed deployed area in support of Operation Enduring Freedom and Yokota.

Johnston said about 30 people will remain at Yokota, since they&#8217;re soon scheduled for a permanent-change-in-station move, and they can support the base&#8217;s C-130 aeromedical missions. Their replacements will be assigned to Kadena.

The personnel reduction is due in part to the relocation of the Theater Patient Movement Requirement Center from Yokota to Hickam Air Force Base, Hawaii. Johnston lost about 10 administrative support technicians in the transfer. &#8220;They take care of the people that are flying, but those issues are being addressed,&#8221; she said.

Many of the 26 aviators in the 30th Airlift Squadron, which flew the C-9s, will train in the United States for 4-6 months to fly a different plane at their new assignment. That squadron also will be deactivated Sept. 25.

The pilots will reluctantly give up their C-9 wings.

Maj. Scott Schaefer, perhaps the squadron&#8217;s most experienced C-9 flier, having completed three tours in various theaters with the bird, heads to Laughlin Air Force Base, Texas, to be a T-1 instructor pilot. He calls the C-9 a &#8220;safe, reliable workhorse.&#8221;

The engines didn&#8217;t meet current noise standards and needed expensive &#8220;hush kits,&#8221; he said. New avionics and navigational equipment also would have to be installed at some point if the C-9 were to continue flying.

Furthermore, the C-9 was not designed to operate in the far-reaching Pacific theater, Mintzlaff said. Its typical missions in the United States involve &#8220;a lot of ups and downs and short distances, and we&#8217;re flying it long-haul across the Pacific.&#8221;

The C-9 would have to make at least one refueling stop en route from Yokota to Hawaii. The KC-135 can make the haul nonstop.

The Air Force decided to enlist multipurpose aircraft for medical evacuation rather than continue dedicating one airframe to the mission, Mintzlaff said. &#8220;It will be on a priority basis. If somebody&#8217;s life or death, and there&#8217;s a plane that&#8217;s halfway close, they&#8217;ll reach out and grab it.&#8221;

With roll-on, roll-off portable pallets to configure almost any aircraft to cart passengers and mobile, in-flight hospital equipment, the aeromedical-evacuation squadron &#8220;is able to take patients on any opportune airlift,&#8221; Johnston said.

&#8220;Opportune airlift&#8221; also will dictate the mode of travel for noncritical patients, who may, for instance, have a routine doctor&#8217;s appointment at a distant medical facility, Johnston said. They may fly commercial, or if it&#8217;s available, on military space-available travel.

Even if they have reservations about the switch, Yokota&#8217;s aeromedical crews seem determined to make the new system work.

Take one out for a spin

YOKOTA AIR BASE, Japan &#8212; Before the C-9A Nightingale disappeared from the skies, a seasoned Air Force flier took one of the Yokota birds for a spin.

An experienced fighter pilot, Waskow has flown about 24 different aircraft &#8212; but never the C-9.

As part of the Air Force&#8217;s supervisory flying program, pilots who are group commanders or higher in rank may fly any aircraft within their commands, said Maj. Scott Schaefer, the C-9 instructor pilot for Waskow&#8217;s flight.

Some basic rules apply, however: No passengers are allowed, and an instructor pilot must be present.

The flight Thursday was to be two hours, with touch-and-go landings, as well as instrument approaches and &#8212; if the weather allowed &#8212; some visual approaches, Schaefer said.

The Air Force announced in July it would retire the fleet of 20 C-9A Nightingales in fiscal 2004. The four Nightingales at Yokota were the dedicated airframes in the Pacific for aeromedical evacuation. The Air Force now will use multiple aircraft to perform that mission.