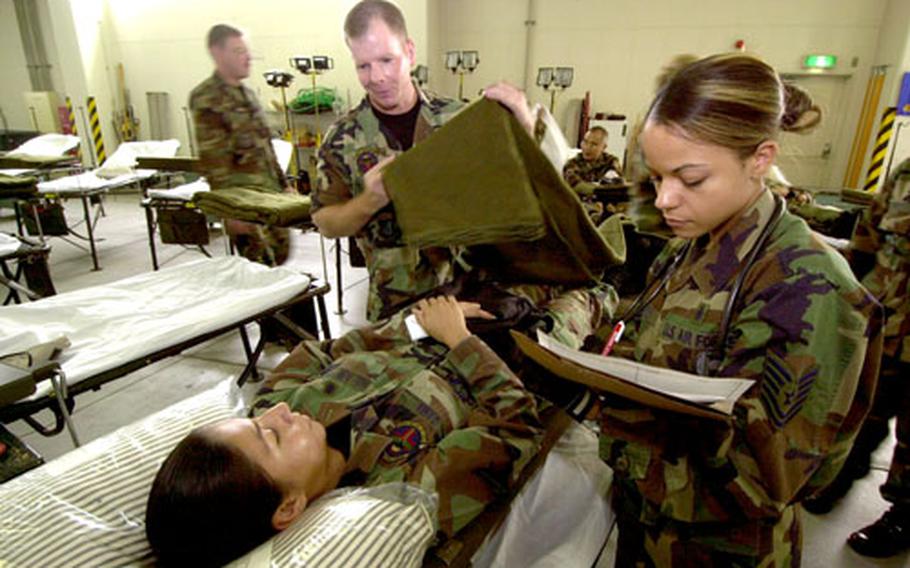 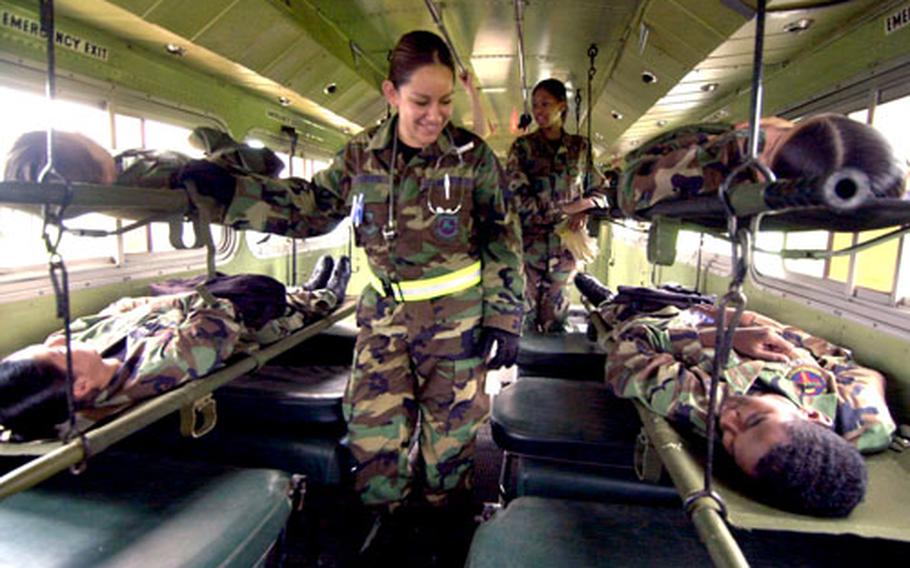 Senior Airman Jacquelin Marrero looks over her mock victims during transportation on a bus for part of the training exercise. (Christopher B. Stoltz / S&S) Airmen move a mock victim during the transportation stage of the training exercise. (Christopher B. Stoltz / S&S)

YOKOTA AIR BASE, Japan &#8212; Base hospital officials tested their ability to process hordes of casualties Friday. It was the centerpiece of a two-week training session for 27 reservists from the 452nd Aeromedical Staging Squadron at March Air Force Base, Calif. That unit, scheduled to remain at Yokota until Saturday, would operate the aeromedical staging facility in the event of a real emergency in the region.

The unit set up a contingency ASF complete with triage, care stations and beds that would temporarily house patients in the aftermath of an attack or natural disaster.

&#8220;Its purpose is to house patients, stabilize patients, get them ready to be evacuated to a higher echelon of care &#8212; like Tripler Army Medical Center in Hawaii. We wanted to prove we could set it up and run patients through, just to show the flow of what would happen.&#8221;

The ASF is utilized at airlift hubs where casualty flow is expected to be heavy and &#8212; as an extension of a medical treatment facility &#8212; complements patient care with additional physician, mental health, dietary and pharmaceutical capabilities. It can be used for a full range of contingency operations.

Arranging Friday&#8217;s scenario was a chore in itself. Fifty-five cargo pallets of medical materials used for deployments had to be shifted to the unit&#8217;s other warehouse on base while a warehouse behind the dental clinic was cleared for the training.

The open bay then was filled with 219 beds and divided into areas for those requiring minimal, medium or critical care &#8212; with egress aisles on all sides. Sorenson said 25 airmen from the 374th Medical Group acted as &#8220;patients,&#8221; while about 20 others assisted in treatment.

Maj. Janet Lawrence, the 452nd Aeromedical Staging Squadron&#8217;s chief, who works as a full-time nurse in Las Vegas, said her team is composed of 14 medical technicians, two logistics specialists, two administrative technicians, two administrators and six nurses. &#8220;We have some young airmen who have never really seen an ASF setup like this,&#8221; she said. &#8220;We do practice at our base, with maybe five beds, but nothing as big as this. It&#8217;s good for them, because they get to see how it really looks.&#8221;

Tech. Sgt. Courtney Davis of the 452nd Aeromedical Staging Squadron, after tending to a simulated patient screaming in pain, said rehearsals like this one got her ready for two deployments in the United States, where she helped bandage up wounded troops returning from Iraq. &#8220;They try to make it as realistic as possible,&#8221; she said.

Col. Mark Presson, the 374th Medical Group commander, said the exercises are conducted in hopes that such extreme measures are never required. &#8220;This was a test of our capabilities,&#8221; he said. &#8220;If we had to do this tomorrow, we needed to know we could.&#8221;