Yokosuka to open ‘nicest military gym in the world’ 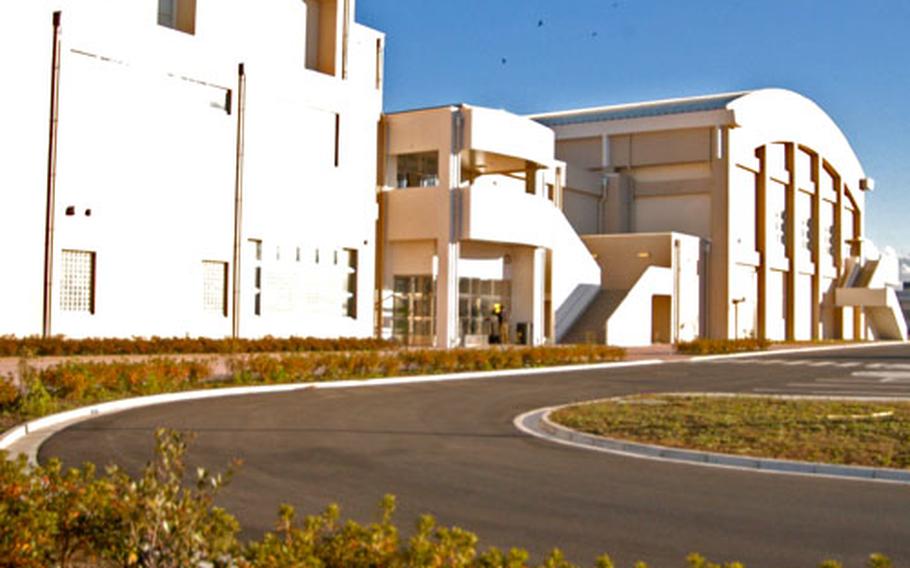 The new gymnasium at Yokota Air Base, Japan, has yet to get a name or a firm opening date but base officials estimate the doors will be unlocked in January or February. (Allison Batdorff / S&S)

The new gymnasium at Yokota Air Base, Japan, has yet to get a name or a firm opening date but base officials estimate the doors will be unlocked in January or February. (Allison Batdorff / S&S) A 50-meter pool is one of the attractions at Yokosuka’s new gym. (Allison Batdorff / S&S) The cardiovascular room features a total of 60 stair climbers, treadmills, stationary bikes and elliptical machines — many with their own LCD screens. (Allison Batdorff / S&S)

Couches &#8212; still with the plastic on &#8212; line the walls. Green plants cozy up next to them. Floors are carpeted, not tiled. Tons of comfortable cubby holes invite reading, resting, just hanging out.

&#8220;What makes this facility unique is the &#8216;private club&#8217; atmosphere,&#8221; Morale Welfare and Recreation Athletic Director Kyle Rhodus said. &#8220;This is not your typical military fitness facility. Youwould have tovisit it yourself to understand.&#8221;

People soon will get that opportunity after a yearlong delay in the opening. While the new gym has yet to be named or a concrete date set, Rhodus estimates doors will be unlocked in early 2006, likely January or February. Construction began about 2&#189; years ago, he said.

The aerobics and martial arts room has mounted flat-screen television and premium sound systems, so a person can slide in a DVD and get to work without needing a teacher. The gym houses two full-sized basketball courts, three racquetball courts, a multipurpose room and an entire room dedicated to abdominal work and stretching. At the gear issue counter, one can find items needed for a workout; lockers can be rented by the day or month.

The cardiovascular room has stair climbers, treadmills, stationary bikes and elliptical machines, many with their own LCD screens. Or exercisers can listen to a choice of nine channels playing on large screen televisions.

The U.S. Government bought the equipment, but the Government of Japan designed the project and built the gym &#8212; part of the Japan Facility Improvement Program, which both governments coordinate.

It was built to replace Thew Gym, its next-door neighbor, which turned 50 last year.

Anyone with a military ID card can use the new gym when it opens. And except for recreational swim times at the Natatorium, it&#8217;s free.

&#8220;This will be a first-class fitness facility, with state-of-the-art fitness equipment and programming,&#8221; Rhodus said.&#8220;Not only are we quadrupling the amount of fitness workout space, the addition of the indoor 50-meter swimming pool will allow us to offer unique training and recreational opportunities that we could not before.&#8221;