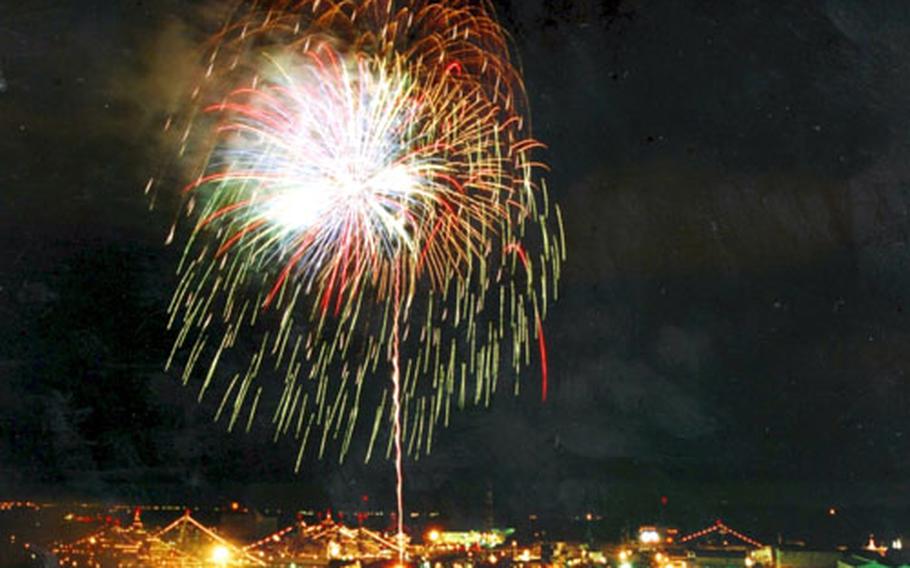 Last year&#39;s Yokosuka Countdown drew 45,000 people to Verny Park on New Year&#39;s Eve. This year&#39;s party is Saturday and features fireworks, a concert, and the last-minute countdown to 2006. (Courtesy of the City of Yokosuka)

But those in Yokosuka, Japan, get to party it up, count &#8217;em down and be among the first in the world to see the fiery ball rise for the first time in 2006.

&#8220;It&#8217;s tradition to come down to the [Miura] peninsula to watch the first sunrise of the New Year,&#8221; said Emi Louie-Nishikawa of the International Relations Division of Yokosuka City Hall.

But before the sun shows up, an estimated 40,000 to 50,000 people will pour into the city&#8217;s Verny Park on Saturday night for the Yokosuka Countdown celebration. Hosted by the Yokosuka City Tourism Association, with help from the U.S. Navy, the event promises music and merrymaking from 9 p.m. to 1 a.m. This is the ninth year the city has thrown the party. With music, fireworks and a countdown, the ritual will feel familiar to most Americans in the area, said Louie-Nishikawa.

The U.S. Navy at Yokosuka Naval Base provides a barge from which fireworks are detonated. Many of the ships will chime in with lights and steam whistles. In 2004, the Japanese Maritime Self-Defense Force decorated its submarines.

Food vendors will serve curry, tonjiru (pork soup) and other goods &#8212; some free. Lighted balloons will be passed around and entertainers will launch into a New Year&#8217;s concert within the first 10 minutes of the new year.

And, when the party&#8217;s over, those wanting to start off the year in good stead can volunteer for a cleanup at Verny Park.

Between the U.S. Navy and JMSDF, Saito already has about 40 volunteers, but those interested in helping can muster at JR&#8217;s Yokosuka Station around 1:30 a.m. He provides the gloves, bags and, when the work is done, a meal of traditional &#8220;mochi soup.&#8221;

Verny Park is next to the Daiei Mall, about one minute from JR Yokosuka Station or five minutes from Keikyu Shioiri Station.