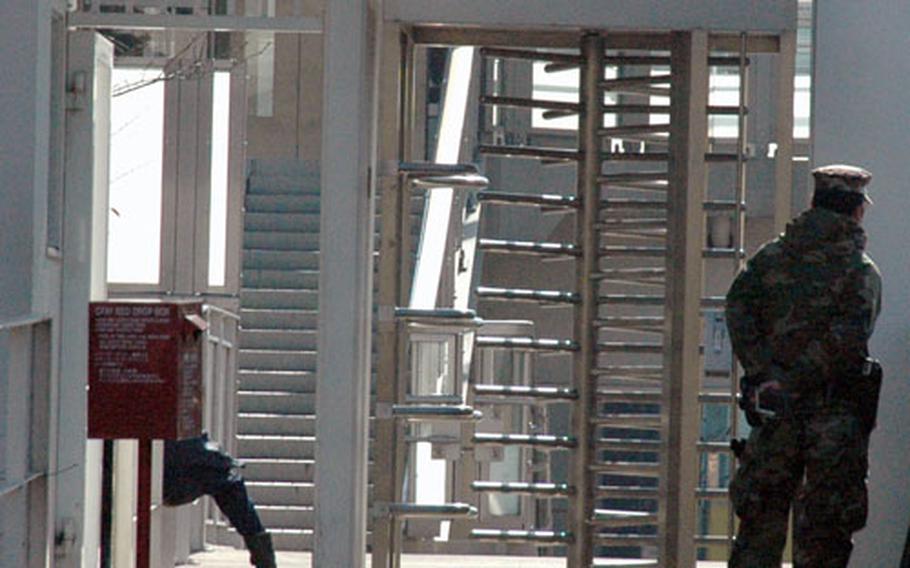 Yokosuka Naval Base is scheduled to install two Smart Gate Systems at pedestrian entry points, one behind the Daiei Mall and the other on the overpass at the main gate. (Chris Fowler / S&S)

Yokosuka Naval Base is scheduled to install two Smart Gate Systems at pedestrian entry points, one behind the Daiei Mall and the other on the overpass at the main gate. (Chris Fowler / S&S) 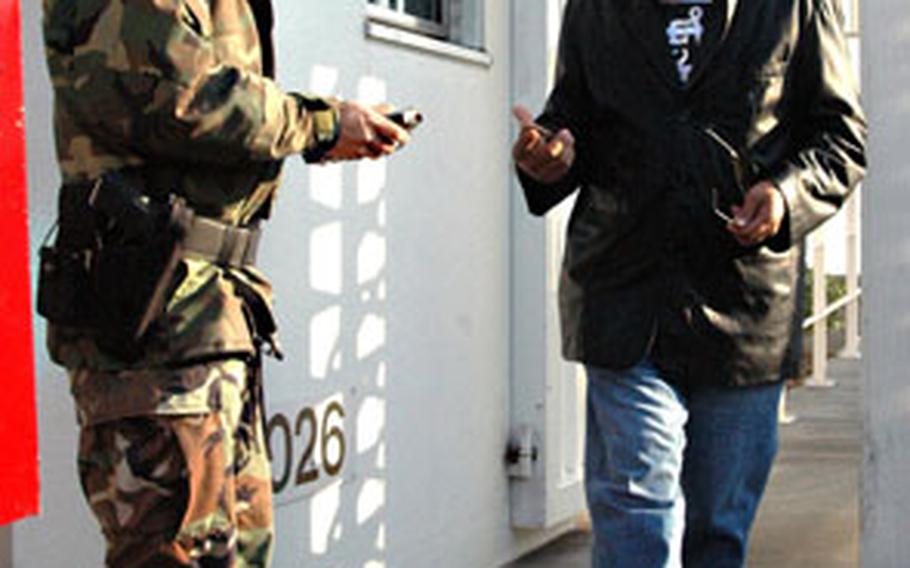 The two Smart Gates coming to Yokosuka Naval Base will eliminate the need for guards to check IDs at the gates where the system is installed. (Chris Fowler / S&S)

YOKOSUKA NAVAL BASE, Japan &#8212; Yokosuka Naval Base will be the first U.S. Navy base on mainland Japan to install Smart Gate unmanned entry control systems.

The two systems are slated to be installed in the coming months at the pedestrian gates behind the Daiei Mall and at the main gate crosswalk. They will combine Defense Biometric Identification System, or DBIDS, technology with motion detectors, video monitoring and biometric scanning technology.

To enter the base through a Smart Gate, users must be registered in the base&#8217;s DBIDS system, said Commander Naval Forces Japan security officer Lt. j.g. Haywood Williams.

According to the base&#8217;s security officer, Lt. Paul Bradley, users will swipe their identification cards to gain access into a hardened enclosure.

&#8220;Once inside, motion detectors and a video system monitored by the regional dispatch center would ensure only one person was inside the gate,&#8221; Bradley said.

Then, an index finger biometric scanner will validate the person&#8217;s identification against the base&#8217;s DBIDS database. If everything matches, a second gate opens into the base.

Each gate enclosure is handicapped-accessible and has room for a baby stroller. Williams said visitors to the base may be issued temporary ID cards that will enable them to use the Smart Gate System.

The entry control point systems &#8220;will save the Navy money and the plan is to expand the system&#8217;s use to other locations if it proves to be effective,&#8221; he said.

A Smart Gate vehicle control system is being used on Okinawa at Naval Radio Transmitter Facility Awase, where, according to Williams, &#8220;it is effective and efficient.&#8221;

Smart Gate, if it works as advertised, will be a big help, Bagmon said.