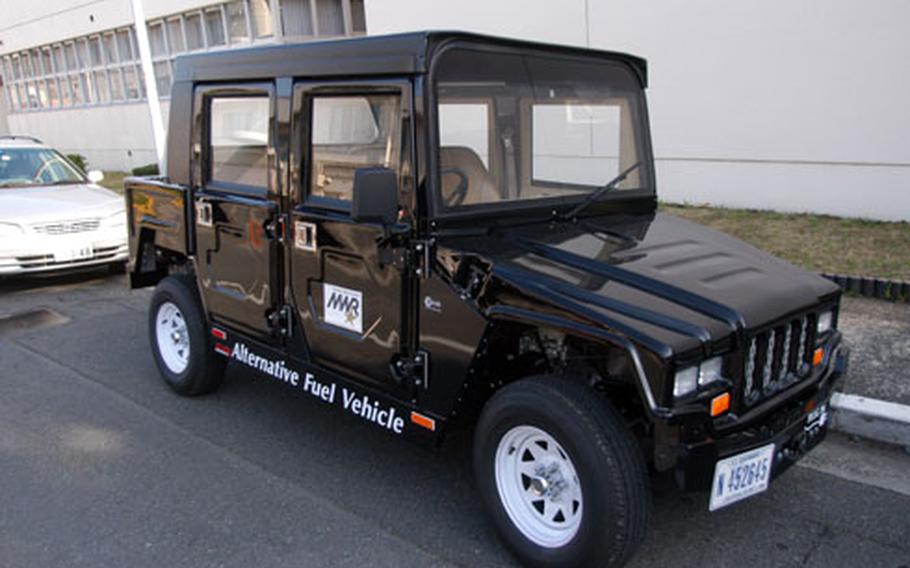 Yokosuka Morale, Welfare and Recreation Department’s fully electric E-Ride sits on a street at Yokosuka Naval Base on Monday. The electric car concept is currently in a testing phase on base to determine long-term feasibility. (David J. Carter/Stars and Stripes)

YOKOSUKA NAVAL BASE, Japan &#8212; Drive around here enough and you&#8217;ll probably see what looks like a golf cart on steroids.

Yokosuka&#8217;s Morale, Welfare and Recreation Department has been testing this E-Ride vehicle since mid-February to determine long-term feasibility.

At an initial cost of $26,000, the fully electric model is comparable to many mid-sized vehicles on the market today.

The long-term savings, however, come with low maintenance requirements and total absence of fuel costs.

According to Symak, other installations around the Pacific have experimented with small electric models, but Yokosuka and Atsugi were the first to acquire the larger-sized models.

The car requires a two-and-a-half to three-hour charge and usually gets about four hours run time per charge. The vehicle maxes out at 40 mph, according to The Carman Group Web site. MWR will be using the vehicles for on-base errands. "I think we&#8217;ll need a good six months of usage before we can provide any substantial feedback," Symak said. "If everything proves to be successful, more could possibly be incorporated into our enterprise."