Yokosuka teen rewarded for going above, beyond 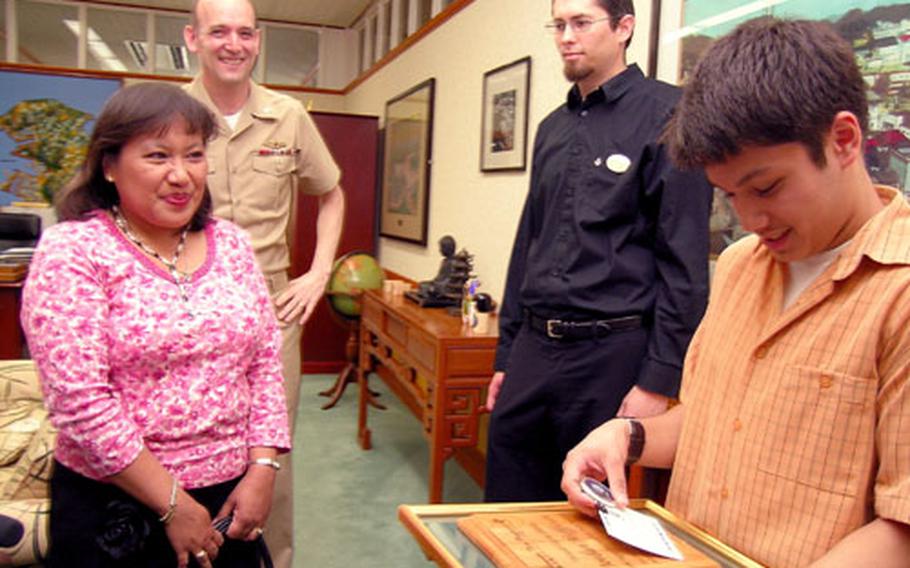 The 16-year-old volunteers at the Ikego Teen Center and keeps the local skate park rolling. He plays guitar and organizes &#8220;open mic&#8221; nights for his peers. He&#8217;s a black belt in karate and teaches kids and adults.

Yokosuka has participated in the Boys and Girls Clubs of America program for the last four years. Since academics are a big part of the criteria, public schools traditionally played a large role in the award, said Geoff Rhinehart, Yokosuka&#8217;s Morale, Welfare and Recreation Teen Program coordinator.

But Huffman and his brother are home-schooled by their mother, Loriza Huffman. Their dad is Chief Petty Officer Brian Huffman.

Huffman&#8217;s outgoing and friendly personality makes him an ideal ambassador between teenagers and adults, Rhinehart said. Instead of grouping up to do negative things, Huffman brings teenagers to the &#8220;TC&#8221; (teen center) or skate park to have fun.

After being nominated, Huffman completed the dozen-page application, essays and interviews in a process that Rhinehart characterizes as &#8220;grueling.&#8221;

Huffman was selected first to represent Ikego, then Command, Fleet Activities Yokosuka. He competed for the regional Navy Asia &#8220;Youth of the Year&#8221; title but it was awarded to Zama American High School student Amber Buck from Naval Air Facility Atsugi. The competition goes all the way up to the White House, where the national champion could receive up to $26,000 in scholarship money.

At the Yokosuka level, Huffman received a plaque from Commander, U.S. Naval Forces Japan, with a &#8220;Simply Awesome&#8221; inscription by Commanding Officer Rear Adm. Jamie Kelly, a plaque from the Yokosuka Teen Programs and $200 in MWR gift certificates.

He was congratulated Friday by base Commanding Officer Capt. Greg Cornish.

&#8220;We need more people like you,&#8221; Cornish told Huffman, who demurred, giving credit to God, his family and good role models at the teen center.