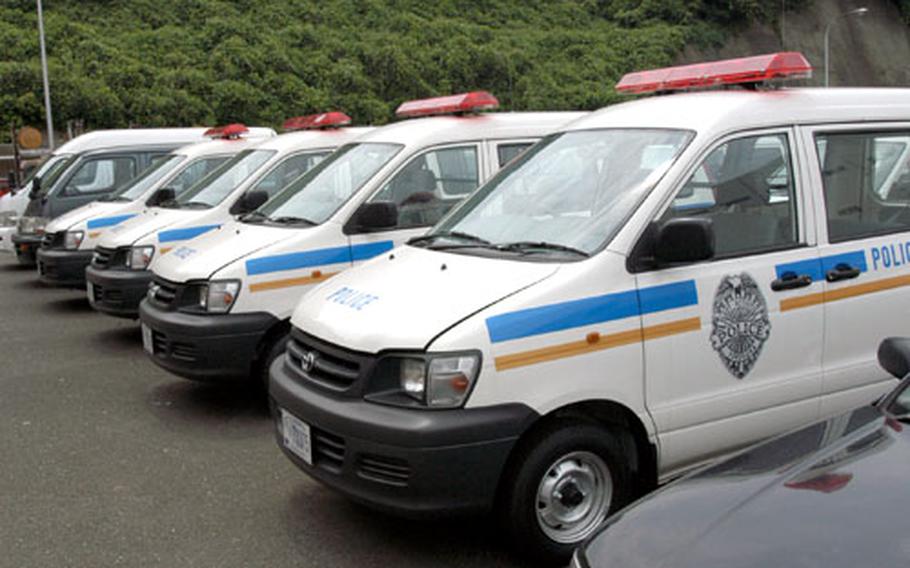 The new security patrol vehicles, with the new-style light bar. The updated vehicles will hit the streets at Yokosuka Naval Base, Japan, later this year. (Juliana Gittler / S&S)

The new security patrol vehicles, with the new-style light bar. The updated vehicles will hit the streets at Yokosuka Naval Base, Japan, later this year. (Juliana Gittler / S&S) YOKOSUKA NAVAL BASE, Japan &#8212; Security forces soon will have a fleet of new patrol vehicles on the roads, equipped with high-tech light bars and a sturdy cage in back for holding the occasional suspect.

&#8220;Our vehicles are heavily used,&#8221; said Petty Officer 1st Class Peter Donaldson, master-at-arms and leading petty officer for anti-terrorism and physical security. &#8220;They&#8217;re beat and battered and torn. Some of their odometers have spun a few times.&#8221;

He said about a dozen patrol vehicles were in such bad shape that two years ago, he pushed to have them replaced.

Under current funding rules, Fleet Activity&#8217;s transportation department was limited in the type of vehicle it could buy.

Rather than the familiar passenger sedans primarily used now, the new ones are converted cargo vans.

The new vehicles will start rolling out later this month.

The vans, Donaldson said, are typical commercial cargo vehicles but with a few twists: steel cages inside and new light bars on top.

The transportation department has been designing, building and installing the steel cages for weeks, said John Coyle, transportation manager for Naval Facilities Engineering Command Far East, the department responsible for buying, modifying and maintaining the vehicles.

The patrol vehicles&#8217; primary purpose is not transporting passengers &#8212; security bought a new prisoner van for that. But if a security officer does have to move someone, it can be done more safely now.

In the past, someone sat seat-belted in the back in handcuffs, Donaldson said. Now, those being transported will be in a steel cage, leaving officers more protected.

One of the new vehicles was converted into the new prisoner transport vehicle by adding benches and a different type of cage. It can carry several people at once.

Other upgrades include moving seats back to accommodate the new cage, changing doors so passengers in the back cannot open them from inside and adding new halogen light bars. The bars include take-down lights, alleyway lights and a more audible siren.

Since the new vehicles are painted like the old ones, the modern light bar will be the most obvious difference.

And, of course, the notable lack of dings.

The first of the 12 new vehicles is slated to be completed later this month. The rest will roll out as they are finished over the next several weeks, Coyle said.