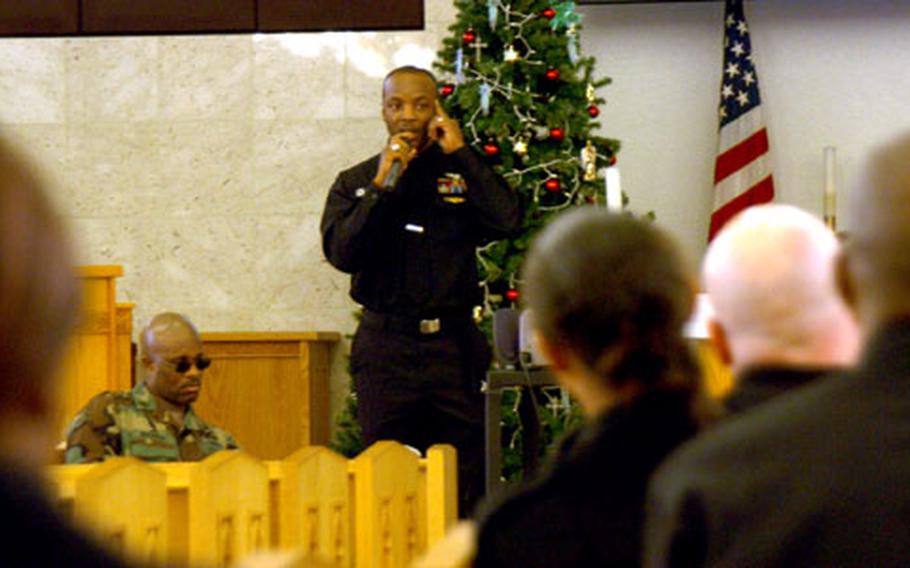 That was the message Command Master Chief Wayne Smith had for Yokosuka sailors during the base&#8217;s holiday safety stand-down this week.

All Yokosuka Naval Base enlisted personnel were required to attend one session of the presentation, held twice a day Monday to Wednesday. Presenters touched on holiday safety, drinking and suicide prevention, among other issues.

Smith said sailors must look out for each other on shore as they would at sea.

Smith added that safety awareness should be a year-round concern, not just during the holidays.

"I honestly thought suicide was higher during the holiday period," he said. "[Suicide] is not something they talk about in headlines. It needs to get put out."

In his presentation about safety and drinking, Petty Officer 1st Class Trevor Godwin told sailors about his aunt, who was killed by a drunken driver. Instead of becoming angry about the loss, he said, he was inspired to educate people and urged sailors to do the same.

When Godwin asked who in attendance had ever driven drunk prior to joining the military, many raised their hands.

"Whatever you did yesterday, if you drank and drove yesterday, and you&#8217;re here today, congratulations," Godwin said. "You&#8217;re number was not pulled. Welcome to a new life, where you have free will and free choice."