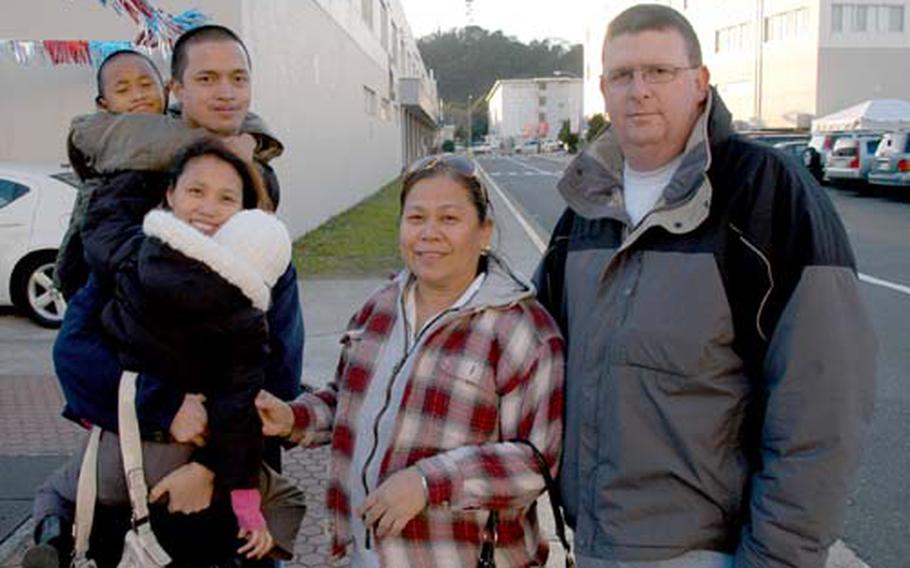 YOKOSUKA NAVAL BASE, Japan &#8212; Most of the international news cameras have long since departed the areas of the Philippines devastated by tropical storms, but the aid effort hasn&#8217;t yet ended.

Three months after Tropical Storm Ketsana and Typhoon Parma caused $4.4 billion in damage, more than a million Filipinos still live in flooded areas and thousands still live in evacuation centers, according to figures from the Philippine government and the Australian Embassy in Manila.

This month, Australia announced it would provide $7 million to rebuild schools, improve health services and provide food. The U.S. also announced it would give an additional $10 million in food aid to the Philippines, bringing the U.S. aid total to $30 million.

However, smaller-scale giving has also been key to the nation&#8217;s recovery.

Remittances from family members, like the many Filipinos and Filipino-Americans working at Yokosuka Naval Base, equal 10 percent of the nation&#8217;s gross domestic product, according to the World Bank. Just outside the base&#8217;s Womble Gate, Mikasa Church held a Christmas Eve raffle for victims of the storms.

The cause represents a personal tragedy for church members like Grace Ito, who works at the base furniture store and helped sell the raffle tickets.

Ito, who married a Japanese man and has lived in Japan since 1987, is one of 13 children in a family from the Santa Lucia area, north of Manila.

She called her family the Sunday that Ketsana struck and listened to them as they described the rising floods surging through the streets. Ito reached all but one sister.

Ito&#8217;s sister and seven nephews died in the storm.

Despite the tragedy, Ito said, her family and the people in the area have rebuilt some sense of normalcy.

She also knows that the aid she has given them, not to mention the holiday gifts, were greatly appreciated.

The extent of Ito&#8217;s tragedy may not be common, but it&#8217;s hard to walk far around the base, population 25,000, without finding someone who at least knows of another family affected by the storms.

Ties between the Philippines and the U.S. Navy go back at least to the dawn of the 20th century. Following World War II, a military base agreement between the U.S. and the Philippines formalized enlistment protocols, and beginning in the 1950s, thousands of Filipinos enlisted annually for the prized jobs, according to a 1985 study of Filipino migration to America.

Today, the Philippine influence remains. Of the roughly 5,500 sailors aboard the Yokosuka-based aircraft carrier USS George Washington, about seven percent are Filipino-Americans, ship officials said in August following a visit to Manila.

People of Filipino descent work throughout the base. Even more stationed at Yokosuka have Filipino relatives through marriage, like Petty Officer 1st Class Byron Williams.

Williams&#8217; wife, Maria, said her brother&#8217;s business was wiped out by flooding in Villasis, Pangasinan province. Family members living elsewhere are helping him get back on his feet, she said.

Giving something to family members in the Philippines during the holiday season may be the norm, but base residents here said the storms give them a reason to give just a little bit more this year.

&#8220;A lot of people here are sending money down there over Christmas, so at least they can enjoy something,&#8221; Byron Williams said.