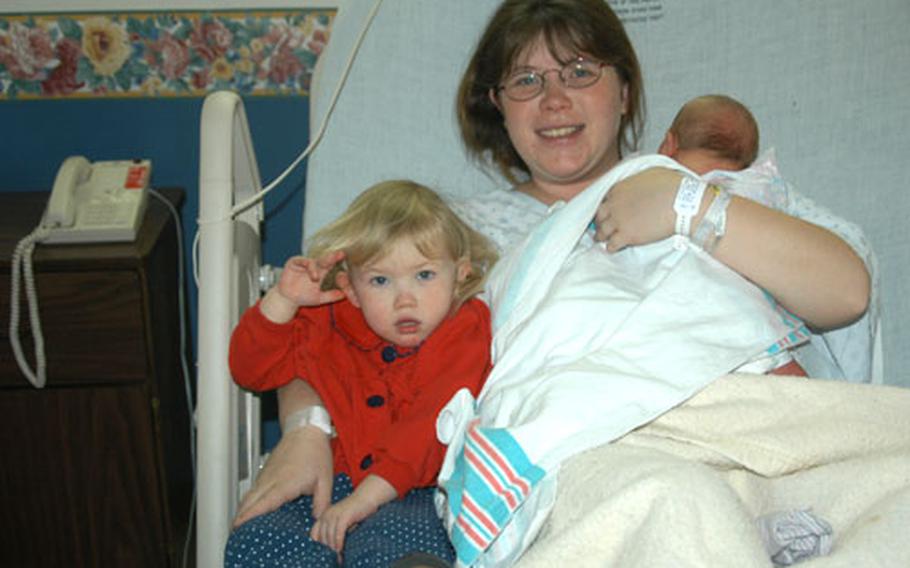 Robin Moeller on Tuesday holds her daughter, Kaylin, and her newborn son, Ethan, who was conceived about two weeks after Moeller&#39;s husband Matt, returned last year from deployment on the USS Kitty Hawk. The Moellers are part of a February baby boom at Yokosuka&#39;s base hospital. Ethan was born Monday. (Nancy Montgomery / S&S)

YOKOSUKA NAVAL BASE, Japan &#8212; First, they made war. Then, they made love. Now, on the labor and delivery ward of Yokosuka&#8217;s base hospital, they have babies. Lots and lots of babies.

This month wasn&#8217;t exactly full of Valentine&#8217;s Day romance for those staffing the hospital&#8217;s obstetrics unit. It was hectic, hard labor, although not as hard as the labor of the 53 women who&#8217;ve given birth at the hospital so far this month.

With 10 more babies due in the hours before February turns to March, the month&#8217;s baby tally will be more than twice the number of last February and a third higher than the average month.

And it wasn&#8217;t just any four months at sea. Last March, the Kitty Hawk, with USS Cowpens and USS John McCain were, as Kitty Hawk Capt. Thomas Parker put it, &#8220;prowling around the Persian Gulf, looking for trouble.&#8221;

The Kitty Hawk launched 3,000 sorties, delivering 900,000 pounds of bombs and missiles, and lost a pilot to friendly fire, according to the Navy. The Cowpens was the first ship in the gulf to launch a Tomahawk into Baghdad. They were, in two words, at war.

Many people believe that after wars, fertility rates rise, possibly as an unconscious, collective attempt at self-preservation.

It&#8217;s an interesting theory, but finding data to support it is another matter. Even substantiating that the bulk of the February babies have fathers who were part of the Kitty Hawk battle group last year is difficult.

But Ethan Moeller is not theoretical. Doctors called him &#8220;the Buddha&#8221; because he weighed 10 pounds when he was born Monday morning &#8212; nine months and two weeks after his father returned from the Persian Gulf aboard the Kitty Hawk.

She could say the same for her husband&#8217;s next deployment.

Just as the babies were being born, the Kitty Hawk was gone again. It left port Feb. 18 and will be at sea for some undisclosed weeks or months. Robin Moeller and her husband, Petty Officer 1st Class Matt Moeller, a weather forecaster, thought he&#8217;d be aboard. Robin planned to give birth alone, then care for herself, her infant son and daughter Kaylin, 30 months, until Matt returned.

Instead, Matt was holding her hand when Ethan was born. He was able to switch places temporarily with someone at Atsugi so he&#8217;d be home for the birth.

But in a few weeks, just as his visiting mother-in-law returns home to Iowa, he&#8217;ll be flying out to join the ship.

Chief Petty Officer Maria-Christina Mercado, a Kitty Hawk spokeswoman, said by phone from the ship that a few sailors had requested baby leave. Whether it would be granted depended on what department a sailor worked in, its staffing level and other factors, she said. &#8220;If the command can accommodate it, they will.&#8221;

Maria Teresa Oliveros is in the same situation as Robin Moeller and, as Moeller points out, many other a Navy wife.

She gave birth early Monday at Yokosuka to a boy, Darren, her first child. Her husband, Petty Officer 1st Class Joel Oliveros, must ship out March 6 from Sasebo Naval Base, Japan, to the USS Safeguard.

But for the Oliveroses, the hard part is over. Maria Teresa didn&#8217;t get pregnant when her husband returned from deployment. She got pregnant after 10 years of trying, until, finally, she was successfully artificially inseminated with her husband&#8217;s sperm.