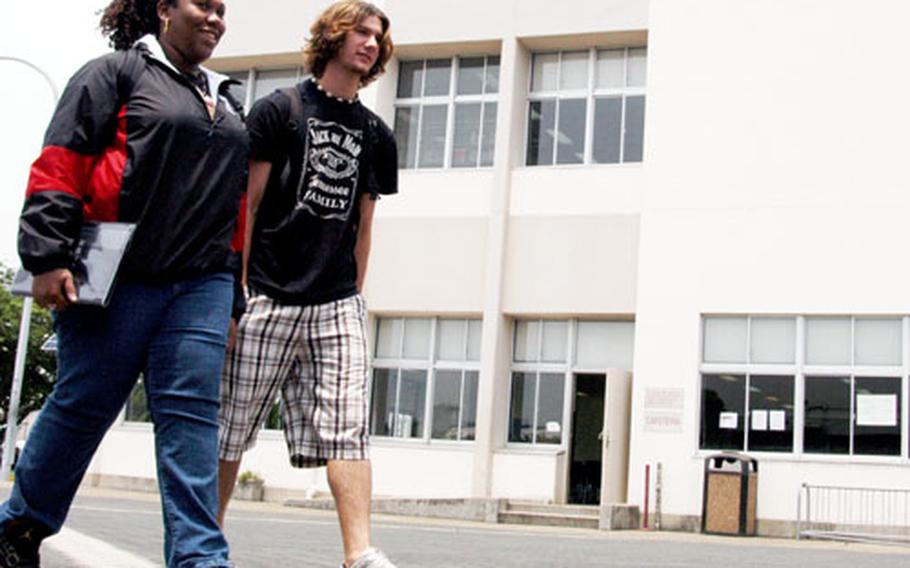 Being the new kid may be nothing new for military kids, but the first days in a new school can still be awkward and lonely. Nile C. Kinnick High School students Azsa Alderman, left, and Seth Bell will welcome the influx of teens expected with Yokosuka&#39;s new aircraft carrier and ready-made friends through a new Student 2 Student program. (Allison Batdorff / S&S)

YOKOSUKA NAVAL BASE, Japan &#8212; Sitting alone at lunch is a prospect students sweat more than PE class, but they consider it an inevitability on the first day at a new school.

That won&#8217;t be the case at Nile C. Kinnick High School here if students Azsa Alderman and Seth Bell have something to say about it.

Teens slated to arrive at Yokosuka in conjunction with USS George Washington will have pre-assigned friends on their first day at Kinnick. And no one will lunch alone, they pledge.

"We&#8217;ll give them friends until they can find their own friends," said 11th-grader Alderman of the 15 high school students anticipated to arrive with the new aircraft carrier. "We will make sure they have someone to talk to, to make it easier at first."

Structure for this welcoming initiative is provided by a Military Child Education Coalition program called Student 2 Student, or S2S.

Each S2S group is supervised by an adult but is founded on the concept that "the best support a transitioning student could have is from another student," according to the group&#8217;s Web site.

S2S focuses on academics, fostering positive relationships and helping new students who are "finding the way" around the community, campus and culture. There are five S2S chapters in the Pacific &#8212; three in South Korea and two in Okinawa &#8212; according to the Web site.

The Department of Defense reports that 48 percent of DOD military and civilian personnel have children and that 68 percent of them are school-age kids.

Most of the new students will be coming from stateside public and private schools and will quickly learn that Department of Defense Dependents Schools, or DODDS, are "different," Bell said.

Before moving to Yokosuka, Bell attended a private school in Tennessee where, he said, students tended to separate and associate along racial lines.

"Everyone is together here," he pointed out.

"We can&#8217;t make it just like the States, but if there is something, some club, that they did in the States, we can see what there is here," Alderman said.

In general, DODDS makes it easy on new kids, as newness is old news in military base classrooms, she said.

"We see new kids all of the time," Alderman said. "That makes it easier to make friends. It&#8217;s not as scary as walking into a public school."

So far, Kinnick&#8217;s S2S chapter is growing slowly, Bell said. Plenty of people volunteered in the beginning, but most have drifted off, he said. Then again, school breaks for the summer this week, and the new students are still stateside, Bell said.

Once people begin arriving, they expect to see more hands in the air, as every military child knows what it&#8217;s like to be the "new kid," Alderman said. She moved from Italy a few years ago.