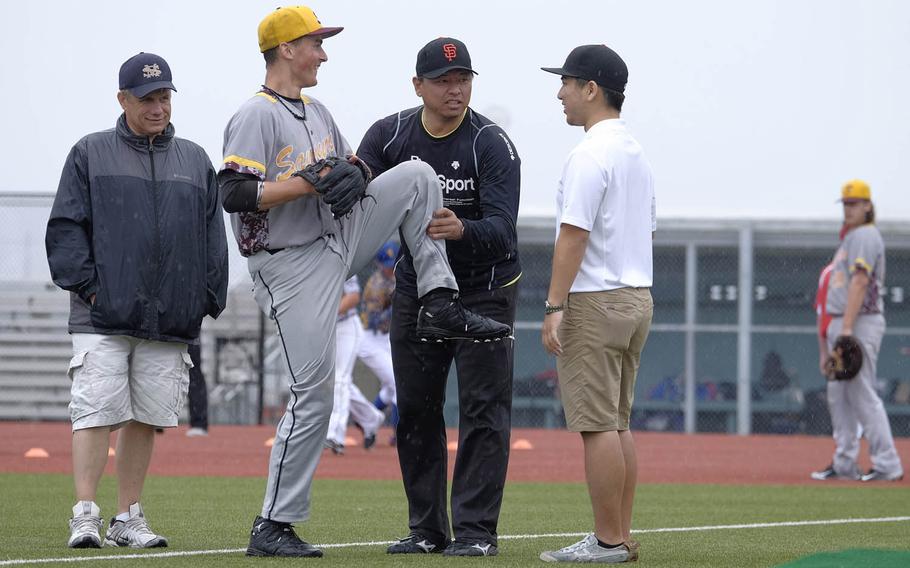 Keiichi Yabu, center, works on M.C. Perry's Garrett Macias' pitching mechanics during a pro-scouting clinic at Nile C. Kinnick High School in Yokosuka, Japan, Sunday, June 5, 2016. Yabu, who pitched for the San Francisco Giants and the Hanshin Tigers, has attended the past three scouting clinics as a pitching coach. (James Kimber/Stars and Stripes)

Keiichi Yabu, center, works on M.C. Perry's Garrett Macias' pitching mechanics during a pro-scouting clinic at Nile C. Kinnick High School in Yokosuka, Japan, Sunday, June 5, 2016. Yabu, who pitched for the San Francisco Giants and the Hanshin Tigers, has attended the past three scouting clinics as a pitching coach. (James Kimber/Stars and Stripes) 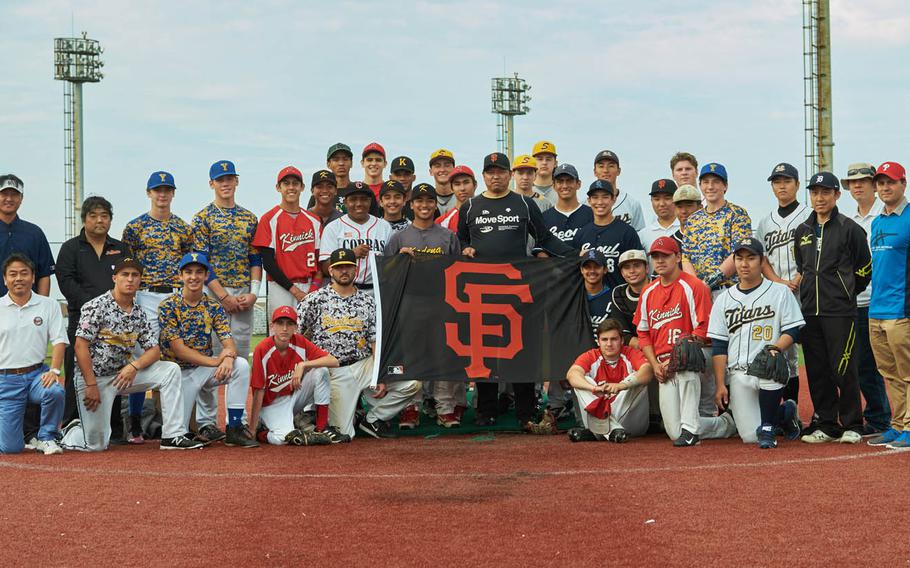 More than 30 athletes from nine Far East schools attended the camp Sunday that boasted a former big-league pitcher, an infielder who played professionally in Korea and scouts from the San Francisco Giants, Minnesota Twins, Philadelphia Phillies, Cleveland Indians and Detroit Tigers. The scouts ran the athletes through drills and recorded combine results before letting the players loose to play in an exhibition game.

From humble beginnings, the clinic has picked up steam as the word has spread.

“We started this thing five years ago with a couple of players from [Kinnick] and Yokota,” said Chad Stark, the event’s unofficial organizer and unintentional founder. “Then the next year, we got a few more players, then (Keiichi) Yabu came out, and then it just took off. It was never supposed to be this big.”

Stark, who is also the host school’s head coach, volunteers to pour dozens — maybe even hundreds — of hours into the clinic. Most of that time is often logged immediately after the Far East Tournament and, since the clinic is not a league-sanctioned event, during his off-time.

“I do it for the kids. They’re the stars and deserve recognition for the work they put in,” Stark said.

“There aren’t a lot of people who even know these kids are out here,” Kusumoto said. “They seem to be having a lot of fun today with our coaches. If a few of these guys pick up some pointers here and it helps them down the road, then it was a good day.”

Yabu, the clinic’s pitching coach, is the main draw. His resume includes a 10-year career with the NPB’s Hanshin Tigers, where he was named Central League Rookie of the Year in 1994, and two seasons with the Oakland A’s and San Francisco Giants before returning to Japan to finish out his career with the Rakuten Eagles.

“I’ve watched some of these players grow and develop into better players,” the sturdy 47-year-old righty said through a translator. “I keep coming back to see if they listened, digested what I told them to do and executed it. If so, I can refine and tailor my coaching.

Kinnick’s Kasey Walker, a 16-year-old pitcher/shortstop, is one of the player’s Yabu is most excited to see next year. He saw better technique from the sophomore that may have attributed to his increased velocity on the mound.

“It’s really humbling to know Yabu singled me out,” Walker said. “It’s always been a dream of mine to play professional baseball, and I’ll put in as much work as needed to achieve that dream. If any coach working with me tells to me to work on something in my game, I’m going to do it.”

David Kim, a scout for the Minnesota Twins who played six seasons in Korea with the LG Twins and Doosan Bears, has volunteered for the last three clinics and is considered the keystone. The one-time infielder with a trademark visor runs drills for four positions simultaneously, often directing more than three-fourths of the attendees at the same time.

In the exhibition game, E.J. King’s shortstop Carlos Thompson laid out to make a spectacular one-handed, over-the-shoulder diving catch in shallow left before throwing a strike to first that was just a fraction of second too late to catch the lead runner. Kim jokingly summed up his efforts.

“See what an hour of drills can do,” he said.

Each year, participation in the clinic has grown. Only a small handful of schools who compete in Far East Baseball have yet to send players, and coaches and scouts from other professional teams are always encouraged to attend.

“I have a few ideas brewing for next year,” Kusumoto said. “I want to make this as meaningful to the players as we can.”