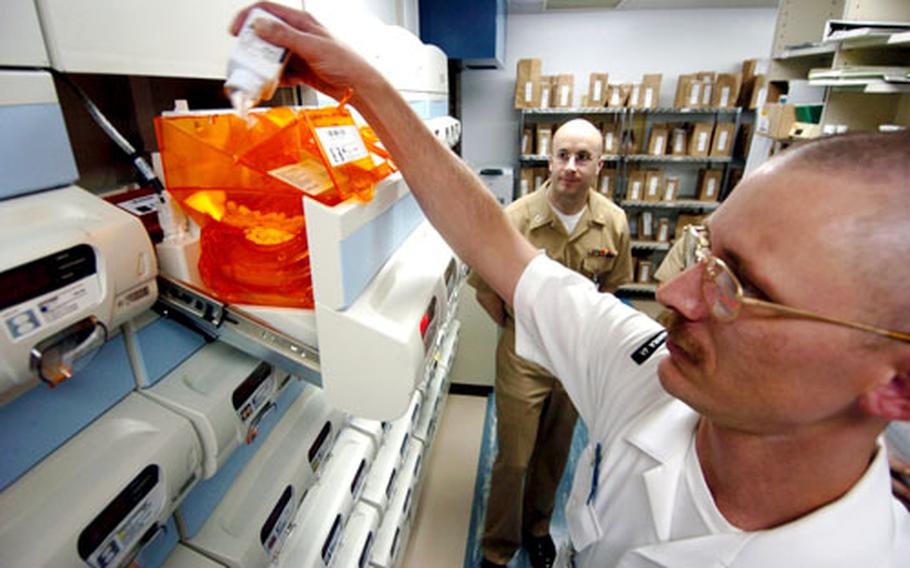 YOKOSUKA NAVAL BASE, Japan &#8212; With its series of small, automated compartments arranged in rows along a wall, U.S. Naval Hospital Yokosuka&#8217;s new Pharmacy 2000 machine resembles a cross between a vending machine and a Las Vegas slot machine.

The automated system is designed to help the pharmacy fill thousands of prescriptions with less chance for error, officials said.

Pharmacy 2000, created by McKesson Corp., was installed in March and is among the first of its kind at an overseas medical facility, Schwartz said.

It consists of a wall unit with 126 compartments attached to a computer system and bar-code reader.

The bar codes do everything from identifying who is filling a prescription to double-checking that the pills selected are the same ones in the orange plastic container a patient takes home.

It starts when a doctor in the hospital prescribes a medication. The information is put into a computer, and before the patient finishes dressing, a bar-coded label prints out in the pharmacy. Doctors&#8217; illegible handwriting is a thing of the past.

Pharmacy staff then scan their personal barcode for accountability followed by the printed label, which they affix to a pill container.

The machine takes over, and with mechanical beeps the pills are counted and dispensed. The machine is made so that several people can fill several prescriptions simultaneously.

A small digital display on each compartment shows the number of pills counted and the filler&#8217;s initials so two people working together can easily spot their order.

Only the most often-prescribed pills are stored in the machine. Including creams and liquids, the pharmacy stocks about 2,000 line items, Schwartz said. So the staff still must do things the old way sometimes.

Before the Pharmacy 2000 arrived, pills either were kept in storage cassettes that were placed manually on a small Drug-o-Matic machine for dispensing or were counted using a weight-based pill counter.

The new system is more efficient but also a little tedious, those who use it say. Each step must happen in the correct order or the machine doesn&#8217;t cooperate. On Thursday, for example, Curry had to start over while refilling the wall-unit containers because the empty compartment wasn&#8217;t properly closed before he carefully keyed in the correct information.

The system, albeit finicky, is designed to streamline the process. And it has one very tangible advantage: Its printed and bar- coded labels cost a fraction of a cent, while the old labels cost a few cents each, Schwartz said.

It doesn&#8217;t sound like a big deal, Schwartz said, until you consider the number of prescriptions filled each month: 10,000 on average.