Yokosuka PAWS volunteers step in to save abandoned kittens 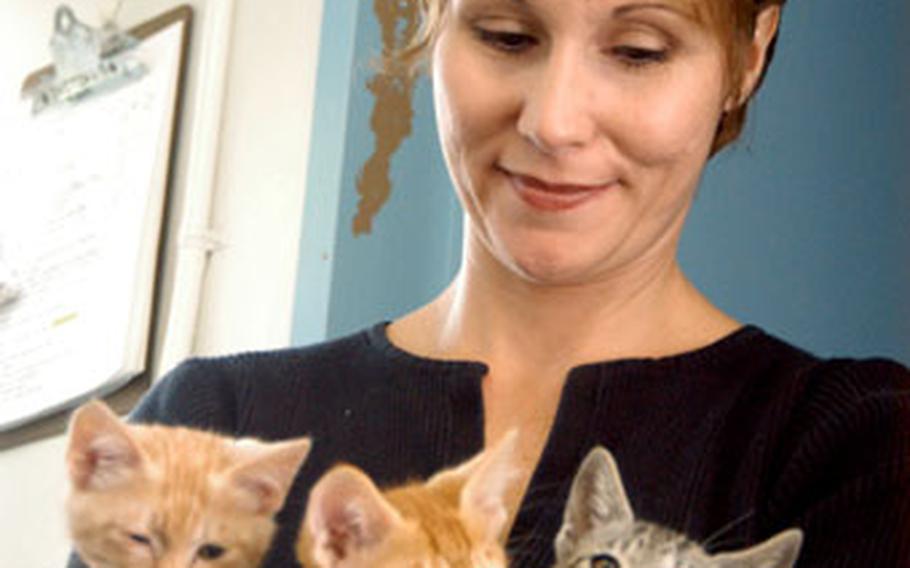 Havingkittens in the house is like taking care of newborn humans, says volunteer Sheila Dove. Through a new program at Yokosuka Naval Base, abandoned kittens are raised and socialized in foster families before they are ready for adoption at four months old. (Allison Batdorff / S&S)

YOKOSUKA NAVAL BASE, Japan &#8212; Tequila and Mai Tai were found near a military base club. Bubbles, Suds and Bounce were found &#8212; go figure &#8212; near the base laundromat.

The kittens were newborns abandoned by their four-legged mothers &#8212; that was, until the human two-leg variety stepped in. And for those foster mothers, that means bottle-feeding every three hours, cleaning litter boxes twice a day and making sure little teeth don&#8217;t chew electric wires or little claws climb the walls.

Thus are the joys of parenthood through Yokosuka Naval Base&#8217;s Pets Are Worth Saving kitten fostering program. Since May, PAWS has fostered 90 kittens to 17 different families. Foster parents raise the kittens until they are four months old &#8212; adoption age &#8212; and then return them to the PAWS shelter. Baby kittens are too fragile and illness-prone for shelter life, said foster program coordinator Melissa Tran.

The program was bred out of a worrisome number of abandoned or unwanted kittens at Yokosuka, Camp Zama and associated housing areas, said PAWS president Dawn Zeumalt.

The shelter &#8212; which is geared for pets &#8212; doesn&#8217;t have space for the motherless kittens. Plus, military community members need more education about feeding feral cats, Tran said. Human handouts may be well intentioned, but they doom cats and kittens by drawing them onto installations, Tran said. If cats stay wild, they won&#8217;t ever make good pets and will have to be trapped and destroyed.

Kittens caught young enough, and who are healthy and social, are placed with foster families. Volunteers go through PAWS shelter training and learn kitten care from Yokosuka&#8217;s veterinary technicians. Some foster parents, such as Lauren Olcese-Mercurio, are &#8220;neonates&#8221; and take the really young ones. She&#8217;s had up to nine kittens to care for at one time, she said.

The care comes at no cost to the foster families, as PAWS picks up the food and all associated medical costs (spray/neuter, microchip, vaccinations). Families must complete a &#8220;personality paper&#8221; on each kitten up for prospective adoptions and allow themselves to be interviewed by interested owners.

Foster families also get the pick of the litter for free, Tran said, as after caring for the kittens, saying goodbye can be difficult.