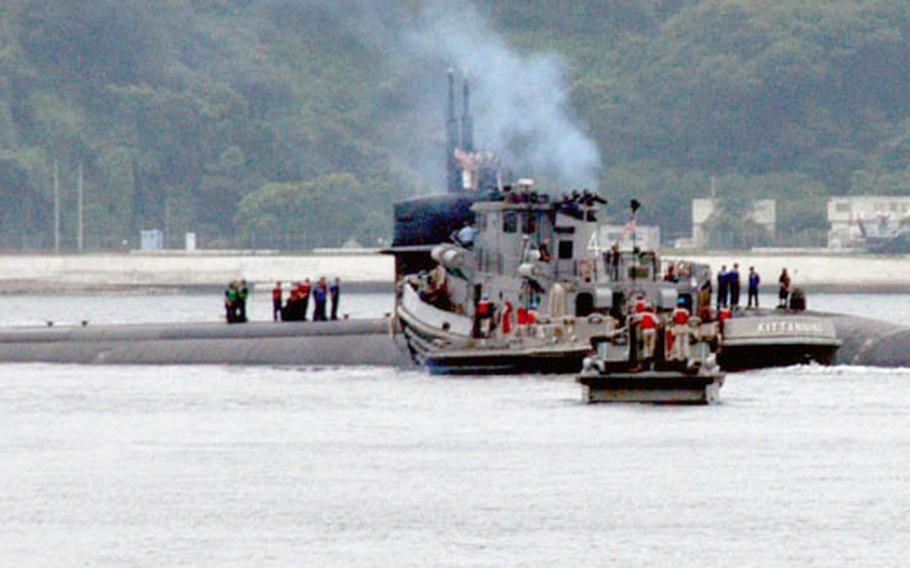 Yokosuka&#39;s tugs move a visiting submarine out of the harbor this month. Yokosuka&#39;s five tugboats are between 36 and 45 years old. (Allison Batdorff / S&S)

YOKOSUKA NAVAL BASE, Japan &#8212; "Dejected" was how Lt. Mark Dumas described fellow Port Operations sailors when all five of Yokosuka&#8217;s tugboats were out of service at one point last year.

But now &#8212; with four tugs running and the fifth scheduled to be operational next month &#8212; the mood is upbeat, he said.

The goal is to have all five tugs ready by the time the USS George Washington pulls into Yokosuka&#8217;s harbor, Zenn said. The aircraft carrier is due to take its place as the largest ship in the Forward Deployed Naval Forces in September.

"We&#8217;re focused on the arrival," Zenn said. "We are doing everything we can to prepare for it."

But getting Yokosuka&#8217;s tugboat fleet operational again was no small feat. The average Yard Tug&#8211;Big, or "YTB" as the tugs are called, in some cases is twice as old as the sailor who works on it.

"The average age of the tugs is 42 years old," said Yokosuka base commanding officer Capt. Daniel Weed. Moreover, "the condition of the tugs had degraded significantly over the last decade," he added.

The last military YTBs were made in 1975, which makes finding replacement parts difficult, often impossible. About 35 percent to 65 percent of parts have to be fabricated by Yokosuka&#8217;s Ship Repair Facility.

"Some parts are obsolete," Zenn said.

But Weed said this summer provided an "opportune time" for fixing the tug fleet, as Yokosuka&#8217;s other old ship, the USS Kitty Hawk, left for good. With the Strike Group also gone, crews were able to devote their full attention to repairing the tugs.

That effort and an additional financial commitment of about $80,000 has allowed the tugboat work to "crawl first, walk, then run," Weed said. "We&#8217;re running now."

Perhaps all the way to the bank. Base personnel said in December that during a 12-week span when no tugs were running, Japanese civilian contractors were paid $300,000 to do the work.

Yokosuka is one of the few Navy ports that still owns tugs and uses sailors to operate them, Weed said.

According to WorkBoat.com, the Navy contracted tugboat operations in most large ports like Norfolk, Va., and Pearl Harbor, Hawaii, in the late 1990s to save money and free up sailors for other duties.

However, in Yokosuka, the Navy tugs are more cost-effective than hiring contractors, Weed said.

Additionally, base tugs are responsible for all jobs moving ordnance, submarines and work outside the Yokosuka operational limit line boundary &#8212; all duties Japanese tugs won&#8217;t perform. Though Petty Officer 1st Class Warren Florence has worked on a lot of old ships, the engineman said his tug was the oldest.

Still, the work has its charm, he said.

"It&#8217;s a learning experience, working on 40-year-old equipment," Florence said. "We have our hands full here."